What scientists learned about caribou from a new collar camera study

Caribou in Alaska ate more shrubs than researchers thought — which could be good news, as shrubs expand northward into the tundra 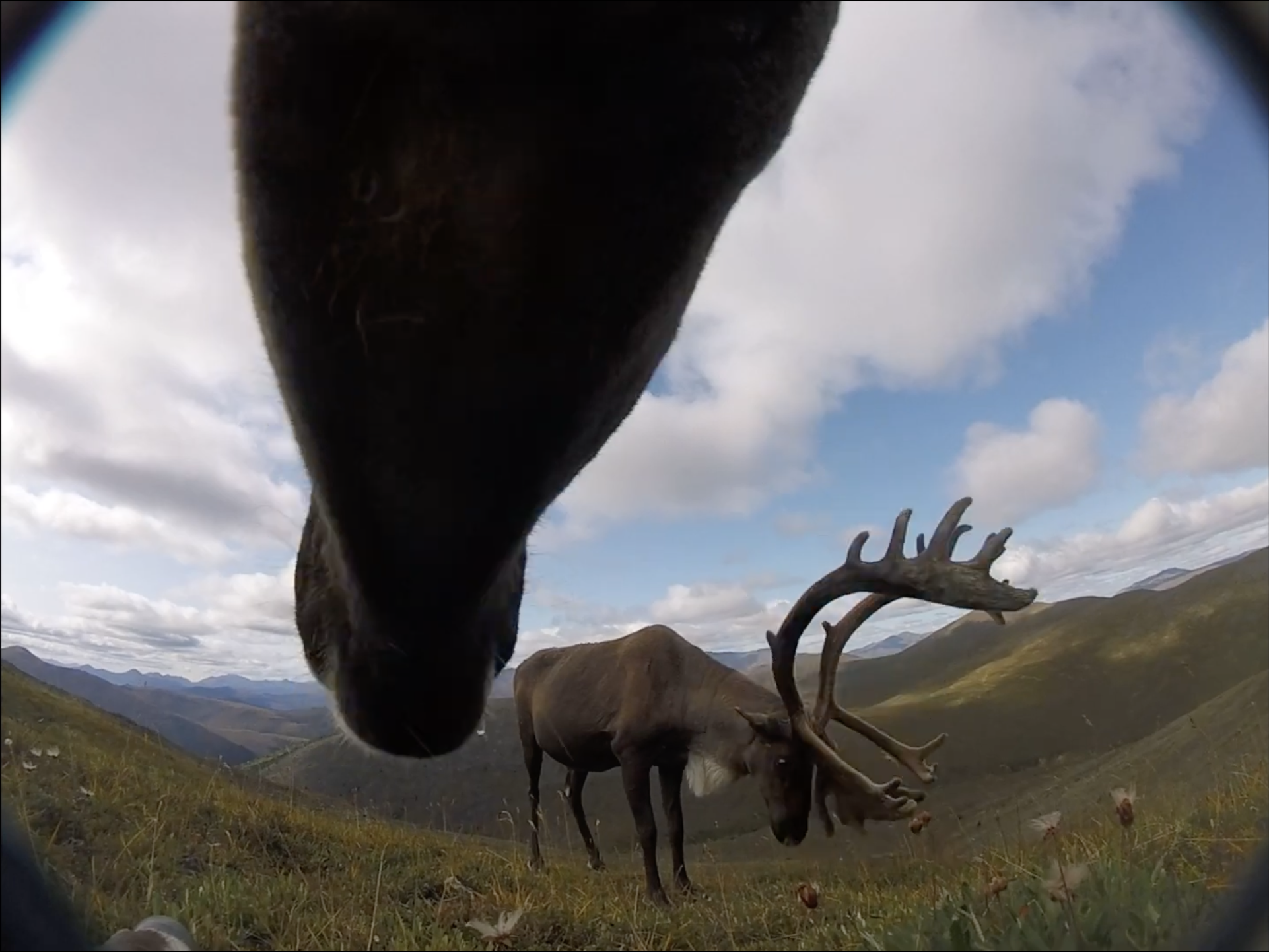 This view was captured by a collar-borne GPS-enabled camera worn by caribou in the Fortymile Herd, which ranges mostly in eastern Alaska but also crosses into Canada’s Yukon Territory. (Screenshot from Youtube)

Caribou move so far and so fast over the landscape that it is hard for people to know exactly what and when they’re eating.

For a long time, the best ways to track the food habits of on-the-move caribou have been occasional — and relatively brief — on-scene observations coupled with a more detailed analysis of droppings the animals leave behind.

Now there is possibly a better way: Camera footage from the roaming animals themselves.

A newly published study evaluates video footage from collar-borne GPS-enabled cameras worn on by caribou in the Fortymile Herd, a herd that ranges mostly in eastern Alaska but also overlaps into Canada’s Yukon Territory. The herd population has fluctuated widely over the past century but, most recently, is estimated at about 84,000.

The cameras were attached to 30 adult females over the summers of 2018 and 2019. They were designed to fall off after summer’s end and send location signals that allowed biologists to retrieve them.

Analysis of more than 18,000 videos found on the cameras showed not just how much time they spent eating — on average, 43.5 percent — but also precisely what they ate. The animals’ diets were highly varied, as expected, but there was a striking pattern: In summer, they made a pronounced switch from lichens to shrubs, according to the study, published in the journal Ecology and Evolution.

“It’s pretty exciting what we’re finding out through the videos,” said Libby Ehlers of the University of Montana, the study’s lead author. “I think we didn’t really understand the tradeoff between lichen and shrubs.”

A key message of the study is that there are flaws in the feces-analysis technique on which biologists have relied heavily to piece together caribou diets.

“The poop is really telling us what comes out in terms of diet,” she said. While the Fortymile project did include fecal analysis, the scientists found that shrub eating wasn’t showing up as much because shrubs were more digestible, she said. With the videos, “We’re seeing what actually goes into the caribou.”

In some ways, the information is reassuring because climate change is causing woody plants to grow farther north in the warming Arctic, a process known as shrubification.

For caribou, shrubs are highly nutritious, with high levels of protein, particularly the willow varieties preferred by the animals after leaf-out. That is especially important for females that have the physical stresses of giving birth and nursing, Ehlers said.

“Their energy demands are so high. They have the really tiny two-month window to get as much shrub and nutrient-dense food as possible,” she said.

If shrubs are good for caribou, that could lessen concerns about the northward spread of woody plants that is happening as the Arctic climate warms.

Still, shrubs are valuable to caribou only up to a certain point, Ehlers noted. Shrubs’ natural defense against overgrazing is the production of tannin, a substance that is considered a toxin. Past research has shown that consumption of too much tannin-producing plant mass inhibits digestion of protein, for caribou and other grazers, including domestic livestock.

The presence of more shrubs has both good and bad effects on caribou, said Kyle Joly, a National Park Service wildlife biologist and co-author of the study.

While there is the benefit of the high-protein summer browse, caribou lose out when shrubs overtake lichen, Joly said. Additionally, deciduous shrubs like willows drop leaves in the fall, covering the ground in a way that is also detrimental to lichen.

Even though caribou eat a wide variety of plants, from lichen and mosses to shrubs and mushrooms, they depend heavily on lichen over the long winters, he noted.

The caribou-cam videos also showed exactly how bothersome insects can be. While caribou spent as much as half their time eating in the absence of insects, that eating time was cut to as low as about 10 percent when once insect harassment intensifies, generally starting in July, the videos showed.

“They don’t eat as much and they move more,” Ehlers said.

Joly said caribou biologists are concerned about the insect proliferation that is happening and expected to increase as the climate warms.

“There’ll be more insects, more intensity of insects and a longer season for insects,” he said

That’s especially worrisome for females that have to give birth, nurse their young and fatten up for the coming winter, he said. “The less time that they’re eating shrubs because of insect harassment, the less time they have to keep up with those energetic demands,” he said.

The use of collar cameras on large mammals is relatively new, but such projects have provided valuable information about feeding, behavior, reproduction, weather conditions and other subjects. A U.S. Geological Survey project fitted nine female polar bears with cameras to track activities on the Beaufort Sea ice from 2014 to 2016; the project helped biologists better understand how much food polar bears need to survive.

Caribou in Canada have also been studied with collar cameras; one project in Nunavut captured images of a caribou birth.

In Alaska, collar-camera studies are underway for two other major Alaska caribou herds. Cameras have now been deployed on animals in the Western Arctic Caribou Herd, with results expected to arrive in a couple of years, Joly said. Another project using cameras on animals in the Porcupine Caribou Herd, which uses the Arctic National Wildlife Refuge, is likely in the phase of analyzing the footage, he said.

A constraint on the use of cameras is cost. Each collar camera costs several thousand dollars, Joly said, so only a handful can be fitted with them; the Western Arctic herd started with 18 collared caribou, but that number was down to 14 last summer after some animals died, he said. Additionally, each camera captures masses of footage that require a long time to examine, he said.

Only females were fitted with the collar cameras, Joly said. Males are problematic because their necks get bigger during the rut season, and then their necks get smaller afterward and they lose their antlers, so the collars can slip off, he said.