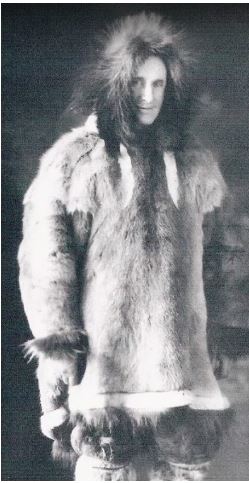 Pete Norberg lived and traded among the Inuit who he referred to as Cogmollocks. (Screenshot from Edna’s Bloodline documentary, courtesy of Eva Wunderman/Youtube)

If you pick up older books about the western Canadian Arctic, you are likely to come across the curious word Cogmollock. There are various spellings, among them Cogmolik, Kogmullik, Krangmalit, Kogmullick and Koggmollick.

Many writers used this curious word without attempting to explain its meaning.

Joe Olsen, writing about the Arctic voyages of the St. Roch in the 1940s, said, “A number of the natives who lived in the area of the McKenzie [sic] delta to Baillie Island area had been to mission schools in Aklavik and roughly, these natives were called ‘Huskies,’ whereas, the natives further east to Victoria Land were called ‘Cogmoliks,’ and very few of those people spoke English.”

Others struggled to find meaning in the strange word.

The trader and author Philip Godsell quoted the trader Pete Norberg as saying about the Inuinnait: “Well, when they hold them drums close to their bodies the noise can be heard a hell of a long way off. That there word ‘Kogmolik’ just means the far-away sound of them drums. Well, when the Nunatagmiuts around the Delta heard from old ‘Klink’ [Klengenberg] of these new Huskies they just used the name ‘Kogmolik’ for ‘em, meanin’, I suppose, far-off or unknown people.”

Godsell noted fur traders were habitually lax in their use of Inuit group names, but claimed that Archbishop Isaac Stringer vouched for Norberg’s explanation.

Godsell used the word in almost everything he wrote about the North. He described Coppermine as being “in the heart of the Cogmollock sealing grounds,” and described a Hudson’s Bay Company post manager as having “carried the red flag of the Company to the land of the unknown and savage Cogmollock Eskimos of Victoria Land.”

His wife, in her autobiography, referred to “the primitive Cogmollock Eskimos of Coronation Gulf,” and told that “my husband’s old friend of many trails and campfires, was dead. Killed by a Cogmollock!”

The term referred to the Inuinnait, who were then referred to as the Copper Eskimos. But before the Inuinnait had had contact with Qallunaat, the term Cogmollock was used for Inuit of the Mackenzie Delta. In the winter of 1899-00, when three whaling ships wintered at Herschel Island, a report noted, “A group of Kogmullicks set up camp nearby and a number of Nunatarmiuts [Alaskan Inuit] also arrived.”

At Herschel Island in 1909 Staff-Sergeant F.J. Fitzgerald of the Royal Northwest Mounted Police wrote, “Two Koggmollicks came with us from Pok-e-uks camp to Herschel island.”

It wasn’t only Qallunaat who used the term. Nuligak, an Inuvialuk man later known as Bob Cockney, in his autobiography published in 1966, referred to “Krangmalit” visitors.

Father Maurice Metayer, who edited Nuligak’s book, wrote in a footnote that the term Krangmalit was used by western Inuit, especially those of the Mackenzie Delta, to describe the Inuinnait of farther east. So, he claimed, it meant “people to the east.”

Indeed, Metayer noted that, for whoever used the term, it meant “the-people-east-of-us.” Thus, for Alaskans, it meant people farther east including those Inuit of the Mackenzie Delta, but for the delta folk it meant “all the tribes between Baillie Island and Gjoa Haven.”

It always referred to someone farther east. But why?

For the beginnings of an explanation, we need to look farther west, back to the earliest usage I have found in print, in the journals of Rochfort Maguire, captain of the ship Plover, on a search for the missing Franklin expedition.

Wintering at Point Barrow, Alaska from 1852 to 1854, Maguire wrote, “The Natives agree in calling the East people ‘Kang-ma-lee’ from the name of the country near the mouth of the McKenzie (sic).”

Later he refers to “the Kan-ma-li or eastern people.”

His surgeon, Dr. John Simpson, wrote about the Barrow Inuit trading with “the Kan’g-ma-li en’yuin [Inuit], who may be called for distinction Western Mackenzie Esquimaux.”

Maguire’s spelling provides a clue to the true meaning of the word. And it is likely this that the late anthropologist Richard Condon noticed when he provided the following explanation in a footnote in his masterful The Northern Copper Inuit, where he suggests the word should be spelled Qangmalit.

Noting that the origin of the term is unclear, he suggests, “A … reasonable explanation is that Qangmalit derives from the term qangmaq, which refers to the banking, or berming, around the base of a snowhouse.”

In fact, the berming can be around the base of any type of dwelling. And so the term would have come to mean “those who bank their dwellings.”

This makes sense in the context of the eastward expansion of Qallunaat traders and Alaskan Inuit hunters and trappers, whose relative affluence usually allowed them to live in wooden structures, who would have commented on the supposedly less-sophisticated dwellings of the Inuit they met as they moved eastward.

Compare this with the eastern Arctic word, qarmaq, meaning a sod house, or a house made of a combination of wood and sod. The Qikiqtani Truth Commission defined it as “a permanent dwelling that is not a tent or made of snow nor a shed or shack, can be made of sod, stone, wood, canvass or combination of any of these.”

It is possible that the word may once have had this larger meaning in the western Canadian Arctic.

Inuit interviewed by Richard Condon in Holman Island, however, denied that there was any pejorative sense to the term.

That would seem to be the brief history of a word which marched eastward from Alaska, through various cultural groups and spellings, to settle as a “slang” designation for the Inuinnait of the central Canadian Arctic.