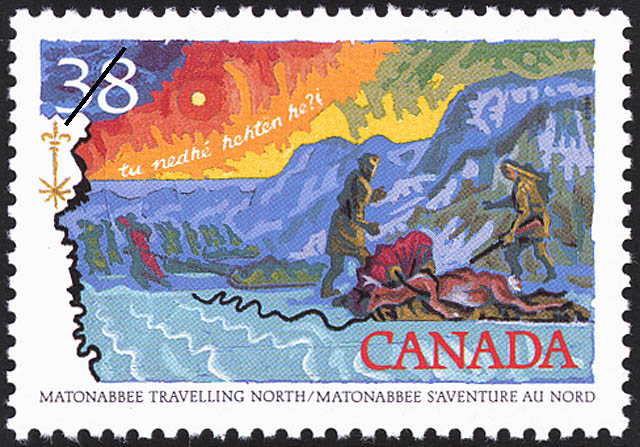 In 1989, Canada issued a postage stamp honouring Matonabbee, the leader of the party of Chipewyans who perpetrated the massacre at Bloody Fall, near the mouth of the Coppermine River. (Image courtesy of Postage Stamp Guide)

I wrote earlier about the massacre at Bloody Fall near the mouth of the Coppermine River, with its terrifying image of a dying Inuit girl writhing in agony at the feet of explorer Samuel Hearne. The leader of the party of Chipewyans who perpetrated the massacre was the influential leader and fur-trade middleman, Matonabbee.

Samuel Hearne’s original journals have not survived, but he eventually prepared a narrative of his trip to the Coppermine River for publication. It finally appeared in print in 1795, three years after his death and 24 years after the massacre.

The book was an instant success. Reviewers pronounced Hearne to have been “a judicious observer” and “a candid and faithful reporter of facts.” Of course, they seized on Hearne’s relatively brief description of the massacre as the highlight of the lengthy book.

This is perhaps explained by placing the narrative in its time. The horrors of the French Revolution, with its attendant savagery, had affected European sensibilities, particularly in England where the wealthy class feared a similar occurrence. As scholar Emilie Cameron has pointed out in her analysis of the Hearne tale, “Stories about death, torture, violence, and mass murder gained unprecedented appeal in Britain during the 1790s.”

Hearne’s account fitted right in. But is Hearne’s report really what happened? Was he a “candid and faithful reporter”?

Some have suggested that Hearne’s published work was shaped and re-shaped by him over the years, then perhaps re-shaped again by an editor after his death. Hearne himself wrote in his preface, “I have at my leisure hours recopied all my Journals into one book, and in some instances added to the remarks I had before made.”

In other words, he revised and edited. But to what purpose? Some of his changes may have been to assuage his own guilt at his participation in the massacre, if only as a spectator. Certainly this remark was added sometime later: “even at this hour I cannot reflect on the transactions of that horrid day without shedding tears.”

To what purpose were Hearne’s words altered, either by himself or by a subsequent editor? Undoubtedly it was to turn field notes into a compelling and saleable manuscript, but also to heighten the action, especially of the scene of carnage, to entice a readership hungry for the exotic and the “savage.”

But Scholar Bruce Greenfield concludes that Hearne was a literate, cultured man, and the horror and the sympathy were all his.

But there has been another, more serious question posed about Hearne’s tale. Was he even there? Or did he simply compose the horrific scene from his own imagination and reports of the Chipewyan, perhaps even Matonabbee himself?

Fifty years to the day after the massacre at Bloody Fall, another British exploring party, that of John Franklin, was travelling down the Coppermine River. The following day they reached its mouth. John Richardson, the expedition’s doctor, wrote that they had earlier met several old Indian men who had met Hearne and were knowledgeable about his journey: “The leading facts of his journey are still current subjects of tradition among that tribe [Yellowknives Dene, then called the Copper Indians], as well as with the Northern Indians [Chipewyan].”

Richardson avoids any mention of the massacre, and therefore circumvents the necessity of stating whether or not he believes Hearne’s account of it.

But in a letter to his wife, written from Bloody Fall, he says, “I do not think his mistake [in latitudinal measurements] willful, but the same excuse cannot be made as to his description of the Eskimaux girl clinging to his knees for his protection in his account of the bloody transaction, for the Indians assure us that he was left twenty miles or upwards in the river … and that when the war party was returning they met Hearne advancing alone having made a spear for himself by tying one leg of a pair of scissors to the end of a long pole…”

If Richardson’s account is correct, then Hearne was not at the massacre, and the verbal picture he painted of an Inuit girl twisting her arms around his legs while begging for mercy never happened. Richardson added: “The Indian accounts of the transaction … agree so well with each other that I believe it.”

And Richardson wasn’t alone. Another member of Franklin’s expedition, George Back, wrote in his field journal that “the most interesting part” of Hearne’s journal “I imagine to be unfounded.”

It seems, then, that Hearne embellished his narrative to suit popular tastes.

Literature scholar Robin McGrath has studied the legends of the Inuinnait, the Inuit group living nearest Bloody Fall, for any Indigenous version of the Bloody Fall story, and found none. She found references in some narratives to events that could have been coloured by reminiscences of the events of 1717, but no native version of the story. Perhaps such a massacre was not noteworthy in those times – there were numerous warlike acts in the past perpetrated by both sides in this traditional conflict.

Throughout his narrative, Hearne does his best to portray Matonabbee in a positive light. This is a difficult task, given the man’s complicity in the acts.

But Hearne tries. He says that the “war with the Esquimaux” was “by no means his [Matonabbee’s] proposal; on the contrary, he was forced into it by his countrymen.”

But that’s the problem when a writer edits his own work – he has to remember what he has said earlier. And earlier, Hearne had written that the Indians “were united in the general cause, and as ready to follow where Matonabbee led, as he appeared to be ready to lead.”

Matonabbee died by suicide in the winter of 1782-83 after the destruction of Prince of Wales Fort by the French, and his realization that his livelihood and high status among his people had disappeared with the fort. Samuel Hearne was recognized by Canada as a National Historic Person in 1920.