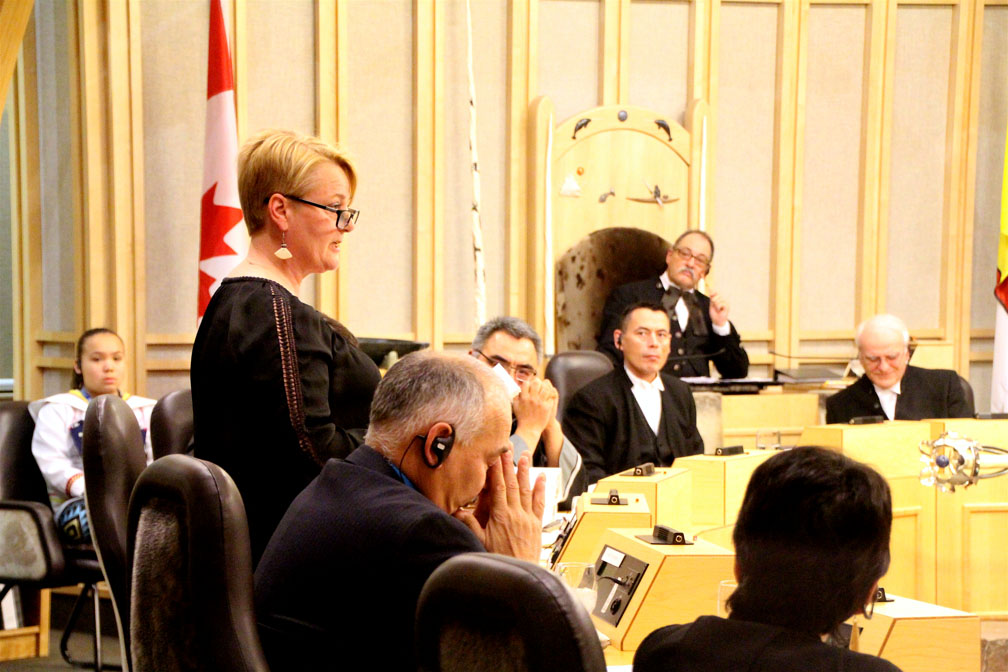 Iqaluit-Niaqunnguu MLA Pat Angnakak resigns from cabinet Oct, 25, after losing all of her portfolios yesterday as punishment for a breach of cabinet confidentiality. In her exit speech, she denied being responsible for the breach, saying it was a misunderstanding and called the premier’s move “heavy-handed.” She said there’s been a “target on my back” since the period before a summer cabinet shuffle that saw her taken out of the health portfolio. (PHOTO BY BETH BROWN)

Iqaluit-Niaqunnguu MLA Pat Angnakak resigned from the Nunavut cabinet today, following Nunavut Premier Joe Savikataaq’s decision yesterday to remove all her cabinet portfolios to punish her for breaching cabinet secrecy, a decision that Angnakak said was “severe” and “heavy-handed.”

“To have the premier publicly declare I made a serious breach of cabinet confidentiality, that I cannot be trusted and that I put our consensus base structure in jeopardy, is something that really shook me. To be stripped of my portfolios and told I should immediately resign is a lot to digest,” she said.

The breach occurred when Angnakak recited information from what Savikataaq called “confidential cabinet documents,” in response to a question on staff housing from Iqaluit-Manirajak MLA Adam Arreak-Lightstone, on Tuesday, Oct. 23.

“We cannot work together effectively if we cannot trust that our colleagues are able to maintain their oaths,” Savikataaq said the following day, on Oct. 24.

But Angnakak denied breaching cabinet confidentiality, and said that what she did was the result of a misunderstanding.

She said she had been given the information about the Government of Nunavut’s staff housing policy review by a member of the premier’s staff, and understood that she could share it with the house.

“I simply gave an honest answer to my colleague in the house,” Angnakak said.

She said she anticipated getting a question about GN staff housing policy, but felt that the prepared responses she had been given were “non-answers” that could lead to more questions.

When Angnakak asked Savikataaq shortly before the start of the sitting about what information she could share, he told her to ask other staff.

According to Angnakak, that’s when the staff member provided her with the cabinet information that constituted the breach.

“This is not the first time I feel the premier has taken direction from others, rather than leading himself,” Angnakak said.

This past summer, Angnakak, who was still health minister at the time, learned she might be shuffled out of the health portfolio, because she was getting into too many policy disagreements.

She said someone told her that she “looked tired and exhausted.”

But with a portfolio as big as health, “If you’re doing your job… you probably should look tired,” Angnakak said.

“I doubt he would use these same words with one of his male colleagues, and in that regard, I believe he was using a double standard,” she said.

“My decision has nothing to do with gender,” Savikataaq told MLAs earlier in the sitting.

“It was her choice” premier says

That’s because just last month, Education Minister David Joanasie had been excused after his department had emailed a confidential document to Nunavut Tunngavik Inc. and others, outlining the department’s plans to amend the territory’s education act.

That breach happened when a staff member sent the document out by mistake.

Savikataaq said, however, that the two situations are different.

“The first one happened out of the control of Minister Joanasie. It was by a staffer. He did not know about the leak until after it was done,” Savikataaq said.

“But with Minister Angnakak, it was in her control. That is the main difference between these two breaches of confidentiality,” he said.

“Minister Joanasie owned it, he apologized. The breach of confidentiality and the breaking of the oath of Minister Angnakak was her choice. She chose to breach a confidential cabinet document here in the house.”

Angnakak did not provide any follow-up comment to media.

It’s not clear if and when MLAs will hold a vote to choose a new cabinet minister from among themselves, or if the government will continue with a seven-member cabinet.