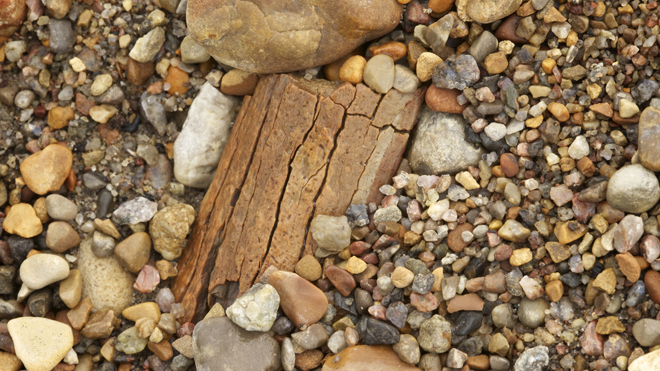 This photo shows one of the large bone fragments that paleontologists with the Canadian Museum of Nature uncovered during their last field season at Strathcona Fiord on Ellesmere Island in 2017. They now believe it is from a giant rabbit that would have lived there about three millions years ago. (FILE IMAGE) 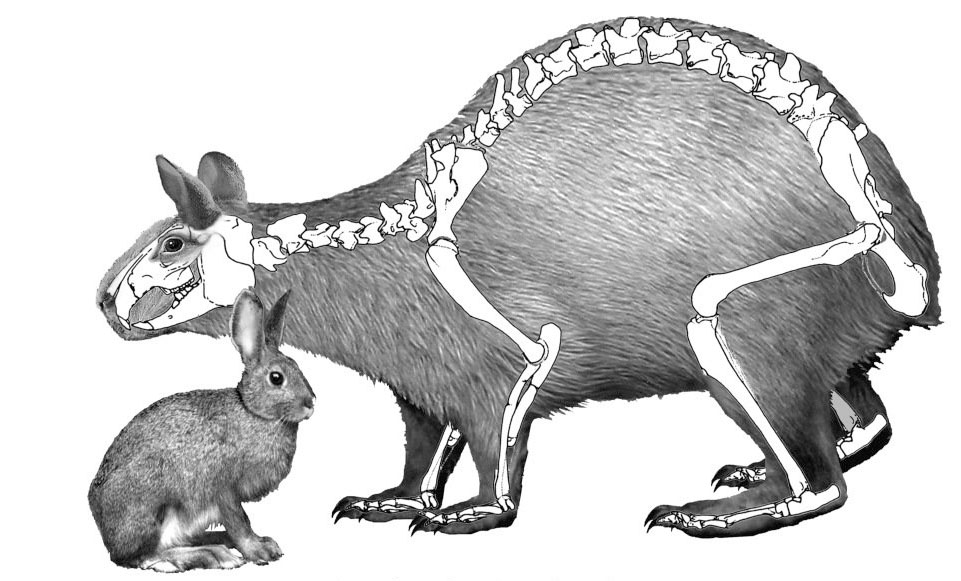 This graphic, produced by researchers, attempts to reconstruct what a half-grown ukaliraaluk, or Lepus arcticus magnum, may have looked like. They believe a fully-grown ukaliraaluk may have stood at least nine feet high and weighed close to 1,900 pounds.

Canadian researchers revealed stunning new evidence yesterday that raises questions about the evolution of mammals on Earth: fossilized bone fragments that reveal the existence of a giant nine-foot hare that once hopped its way around Ellesmere Island.

“We can’t be certain about the colour of this large bunny, which we plan to call ‘ukaliraaluk,’ to pay homage to its Nunavut origins,” Pierre Rock of the Canadian Museum Nature in Ottawa told Nunatsiaq News in an exclusive interview inside the museum’s Ujarak room.

“But we believe that it changed colours with the seasons, like today’s Arctic hare — and we know it was large,” Rock said.

Rock said the creature likely stood about nine feet high from its head to its paws.

Rock’s team of paleontologists, scientists who study ancient bones, base their theory on some 30 fossil fragments, believed to be the remnants of leg and other bones, that they unearthed over three summer field seasons near Ellesmere Island’s Strathcona Fiord.

Last year they found a large bone, in pieces, which they brought hack to the museum’s laboratories for further study.

Analysis determined that this bone is a large humerus, a long bone that would have formed part of the animal’s foreleg.

The size of the bone suggests the recently discovered rabbit species, which they named Lepus arcticus magnum in Latin, may have weighed as much as 1,900 pounds.

It would have had wide flat paws with webbed toes, useful for walking on soft surfaces or snow, and likely had large eyes, helpful for foraging in the winter during lengthy periods of polar darkness.

Petra Felsen of the University of Heidelberg, a bio-climatologist who worked with Rock’s team, said the giant Arctic bunny likely lived two to three million years ago, a period when the Earth was 2 C to 3 C warmer than today, and the Arctic was 14 C to 22 C warmer.

Then, annual temperatures in the area would have hovered around the freezing mark, and winters would have been cold and snowy, Felsen said.

Judging from fossils found at Strathcona Fiord, a boreal-type forest, with trees like larch, birch, alder and cedar, covered the land.

Ukaliraaluk likely maintained its vast bulk by consuming trees and other plant foods, but researchers haven’t ruled out the possibility that the giant hare was an omnivore.

Felsen said they found what appeared to be a pile of large broken eggs in a large nest near the site where they found the bone, although it’s too early to say if there is a connection between the rabbit and the eggs.

“That’s among the links we plan to explore next July when we return to the site,” she said.

Researchers are also now pursuing an intriguing new hypothesis: that in some remote areas of North America, ukaliraaluk could have survived into historic times, but gradually disappeared due to habitat loss.

That’s because of frequent sightings of giant rabbits that persisted into the 1950s. Once written off as hallucinatory fantasies, these anecdotal accounts have prompted researchers to re-investigate the phenomona.

Strathcona Fiord is also where researchers from the Canadian Museum of Nature discovered the remains of a 300-million-year-old creature they called “tiktaalik,” a missing link between fish and land-based animals.

But paleontologists, scientists who study ancient bones, have found that many other critters lived in the High Arctic of the past.