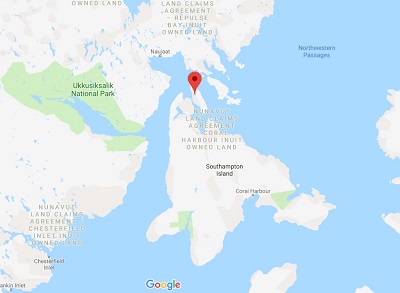 A hunter from Naujaat died after he was attacked by a polar bear last week on White Island. Two other hunters were also injured. (GOOGLE MAPS IMAGE)

Nunavut has seen its second fatal polar bear attack this year, after a hunter was killed outside Naujaat late last week.

Community members say the man was unarmed and without any communication device when he was attacked south of Naujaat last week. It’s believed the victim survived the initial attack but died of his injuries a day later.

A trio of hunters left the Kivalliq community on Aug. 21, heading south to hunt caribou and narwhal, with plans to return two days later.

When the hunters hadn’t returned by Aug. 26, this was reported to local police and authorities that day, which prompted search crews to head out looking for the group on land and by boat.

But the search and rescue crew could not make their way to the location where they believed the hunters were because of ice blocking the route.

On Aug. 27, the Joint Rescue Coordination Centre joined the search with a Hercules aircraft along with a nearby ice-breaking vessel with a helicopter on board.

The three hunters—one of whom was deceased—were located on White Island early on Tuesday, Aug. 28, Nunavut RCMP said in a news release.

“The initial investigation has revealed that the hunters were victims of a polar bear attack,” the RCMP said.

The two other hunters sustained minor injuries in the attack. Authorities have not said if the polar bear survived the incident.

The Government of Nunavut’s Environment Department is investigating the attack, a spokesperson said on Aug. 28.

It’s the second polar bear attack in the Kivalliq region this year; a 31-year-old man was mauled to death by a polar bear in early July on an island near Arviat.

Kivalliaq communities have reported an increase in bear sightings along the western Hudson Bay coast in recent years, but 2018 marks the territory’s deadliest year for bear attacks in Nunavut’s history.

2018 is the first time in almost 20 years that anyone has died in a polar bear attack—the last recorded death was outside Rankin Inlet in 1999.

Earlier this year, the Nunavut Wildlife Management Board decided to increase the total allowable harvest of the Western Hudson Bay subpopulation to 38 polar bears per year.