Nunavut takes another run at revising its Education Act 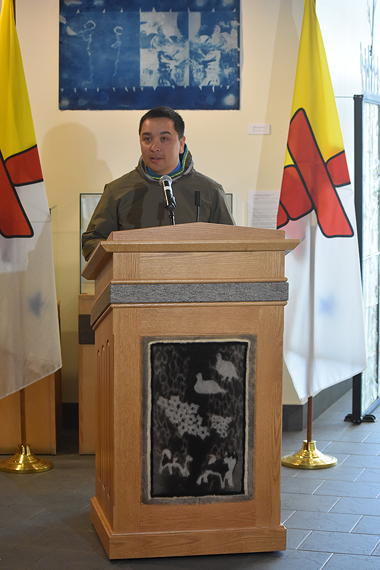 Nunavut’s minister of education, David Joanasie, announced on Tuesday, Sept. 4 upcoming public consultations across Nunavut on reforming the territory’s education laws. The Department of Education says it will use feedback from these meetings to amend the 2008 Education Act and Inuit Language Protection Act. (PHOTO BY COURTNEY EDGAR)

The Government of Nunavut is giving education reform another try.

The first meeting is set for Rankin Inlet on Sept. 17, followed by meetings in Chesterfield Inlet, Whale Cove and Arviat.

The Department of Education says it will use feedback from these consultations to draft new amendments to submit to the legislative assembly in the spring of 2019.

In 2016, the Department of Education held similar consultations, which led to the creation of Bill 37, an Act to Amend the Education Act and Inuit Language Protection Act.

But critics, including Nunavut Tunngavik Inc. and Nunavut’s languages commissioner, accused this bill of watering down Inuit language rights, among other things.

In the fall of 2017, Nunavut’s regular MLAs voted against debating Bill 37. It later died on the order paper.

The upcoming round of discussions will focus on similar topics, including educational approaches, the responsibilities of district education authorities and using the Inuit language as a language of instruction.

To support the consultations and provide a starting point for discussion, the Department of Education has published a leaflet called Ilinniarniliriniq Turaaqpalliajavut, or Our Goals for Education. (See document embedded below this story.)

This proposal includes a 12-point list aimed at reducing some of the administrative pressures placed on DEAs. For instance, principals would be responsible for implementing inclusive education, and the Department of Education would handle appointment panels for principals and vice-principals.

It also proposes creating a new DEA council that would be independent from the Department of Education.

When it comes to Inuktut, the document proposes amending the Inuit Language Protection Act to use the term “bilingual education” to better reflect the goal of offering education in Inuktut, English or French.

Like Bill 37, the new proposal would require the GN to deliver Inuktut instruction “as capacity and resources expand” and to extend bilingual education deadlines as needed.

According to the 2008 Inuit Language Protection Act, all school grades were supposed to “have the right to an Inuit language education” by 2019.

New timelines would be based on how many Inuit teachers the GN is able to hire, the proposal says.

It would let the Department of Education assign a language of instruction and time allotment to each subject by grade level. It would also allow DEAs to choose a model that their community is able to implement based on resources.

This new proposal also suggests the minister of education may make temporary regulations while permanent ones are being developed.

“An enhanced education system built by and for Nunavummiut is one of this government’s top priorities. It must reflect the values and priorities of the territory, and produce graduates capable of pursuing any avenue they wish,” said Premier Joe Savikataaq in a news release.

Nunavut residents are encouraged to provide feedback to the Department of Education at the upcoming community consultations, as well as online, by mail or by comment card at a local government liaison office or DEA office.

“Education reform is still necessary and Nunavummiut must be involved in its development,” Joanasie said.

Although classes have now started in all Nunavut schools, there is still a significant teacher shortage across the territory.

Joanasie said the number of unfilled teaching jobs is always changing, but it currently sits at around 60.