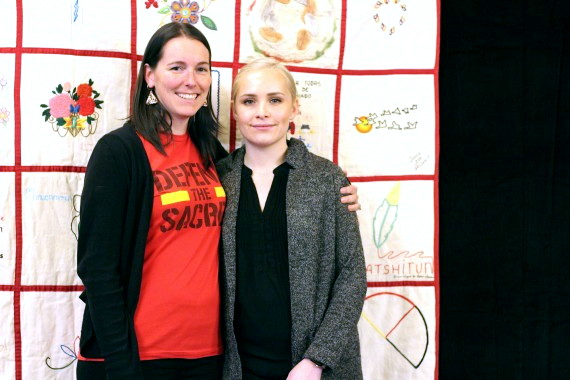 TJ Lightfoot, left, and Jasmine Redfern gave evidence during a panel on decolonization at a hearing of the National Inquiry into Missing and Murdered Indigenous Women and Girls held Sept. 12 to hear from experts and knowledge keepers. (PHOTO BY BETH BROWN)

Commissioners of the National Inquiry into Missing and Murdered Indigenous Women and Girls heard this week how Inuit women could be exposed to violence and harassment in the wake of Nunavut resource development.

“There’s racism at the mine, there’s gambling in the community,” said Iqaluit resident TJ Lightfoot, who spoke on Wednesday, Sept. 12, as a witness during hearings being held this week at the Frobisher Inn in Iqauit.

“Sexual harassment at the mine is a reality for a lot of Indigenous workers,” said Lightfoot.

Lightfoot lives and works in Iqaluit, but comes from Elsipogtog First Nation in New Brunswick, and Nova Scotia. The two-spirit Mi’kmaw youth gave witness testimony to MMIWG commissioners based on their background in crisis intervention, sexual health and environmental violence experienced by Indigenous women and girls and the LGBTQ2S community.

Lightfoot, who has a graduate degree in environmental policy, spoke broadly of resource extraction projects, like fracking, that are being protested against by Indigenous groups across Canada.

One example would be if toxins introduced into a community water supply by a resource extraction project then damaged a woman’s reproductive health or ability to breastfeed.

Experts, community leaders and knowledge keepers are speaking this week as panellists in a four-day MMIWG hearing. The hearings are examining the impacts of colonial violence.

In Nunavut, communities might experience spinoff violence from resource development if drugs or alcohol are brought in by southern workers, if Inuit face language barriers at English-only mines, or struggle with power dynamics at work when Inuit fill bottom-rung jobs at a mine site.

Lightfoot cited a report issued in 2014 by Pauktuutit Inuit Women of Canada and researchers at the University of British Columbia titled “The impact of resource extraction on Inuit women and families in Qamani’tuaq.”

Qamani’tuaq is the Inuktut name for Baker Lake, a central Nunavut community of about 1,700 residents, located 110 kilometres from Agnico Eagle Mines Ltd.’s Meadowbank gold mine.

In that report, women from Baker Lake say that while the mine has brought economic stability to the community and created employment for women, these same women now also face discrimination, substance abuse, violence and breakdowns in family relationships.

In June, a worker at Baffinland’s Mary River iron mine near Pond Inlet spoke with Nunatsiaq News about harassment female employees were experiencing there. That’s after social media posts made it appear that mine staff were referring to female Inuit staff as “cock stars.”

“That is just regular behaviour here,” the woman said then. “ The men just stare and make comments.”

As well, language barriers at mine sites foster inequality for Inuit whose first language is Inuktut, said Lightfoot.

“The message is that you are not important enough to live and work in your own language and that is a form of violence,” Lightfoot said.

Lightfoot showed commissioners a photo of an Indigenous woman holding a feather out towards a wall of about 20 police officers. The woman was part of a peaceful protest by elders, women and children who wanted to preserve water resources in their territory.

“Indigenous women are shut up and shut out of consultation processes,” Lightfoot said.

Cross-examinations will take place today for Lightfoot’s testimony, and for two other testimonies given by witnesses who spoke during a MMIWG inquiry panel on decolonization.

These expert hearings are different from community hearings held by the inquiry that heard from families of survivors and Indigenous victims of sexual violence. A report by the inquiry is expected in April of next year.