As ice and snow return, summer’s over in Nunavut

“It was a cold summer” 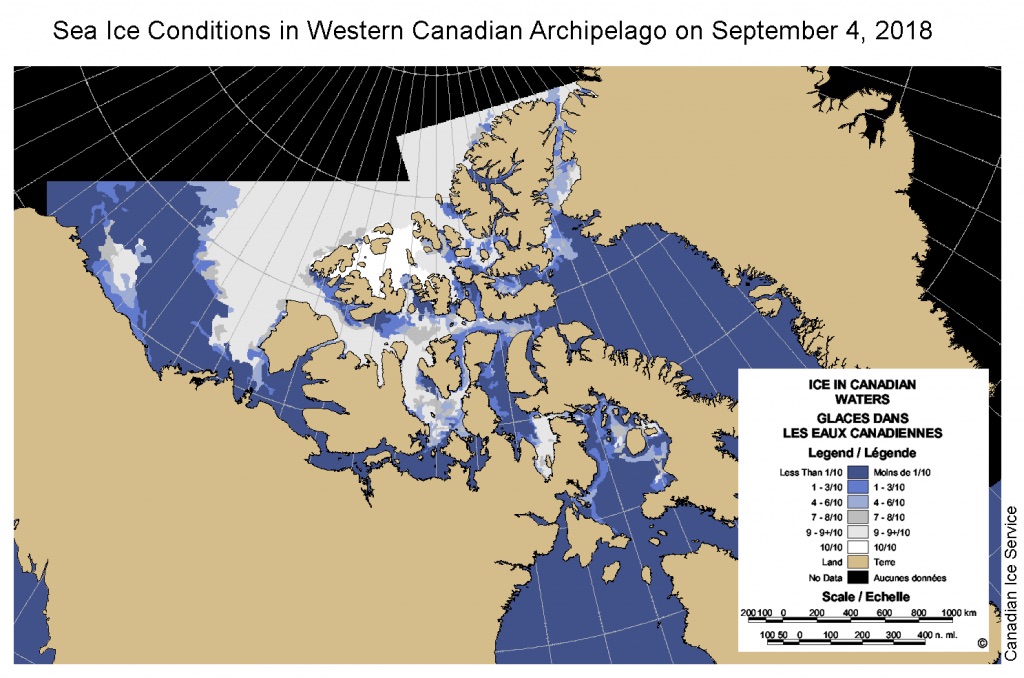 This map from the Canadian Ice Service shows sea ice conditions in the western part of High Arctic islands on Sept. 4. The dark blue shows a low concentration (less than 10 per cent) of ice, while white shows a high concentration (100 per cent). At this time of the year, the Arctic ice cover is the highest it has been since 2014, the National Snow and Ice Data Center said Sept. 5. That’s although the minimum ice extent is expected to be one of the 10 lowest in the satellite record, the NSIDC said. (IMAGE COURTESY OF THE CIS)

Snow has now fallen across Nunavut’s more northerly communities, from Kugluktuk to Qikiqtarjuaq, after a summer that also brought cool temperatures and heavy ice conditions to some parts of Nunavut.

“if you’re trying to get somewhere, and ice is in the way, it’s been a very bad year,” said Gilles Langis, a senior ice forecaster with the Canadian Ice Service.

It remains unclear if ice played a role in the grounding of the Ioffe Akademik on Aug. 24. The cruise ship was not sailing where it was supposed to be due to ice, according to an account by the journalist and author Ed Struzik, who was on board.

“Our cruise plan was changed at the last minute because ice prevented our ship from getting into the original starting point at Resolute Bay on Cornwallis Island. We launched instead from Kugaaruk, which is several hundred miles south of the original departure point,” Struzik wrote in his recounting of the experience.

And, earlier this week, operators of the cruise vessel Hanseatic turned around and headed back east through the Northwest Passage, having decided that ice conditions were too bad to continue on to western Nunavut.

The Canadian Coast Guard also recently rescued two sailors from a smaller vessel that had run into bad ice conditions in the Bellot Strait.

Summing up the summer ice conditions in 2018, Langis said that in many areas it was “very challenging”—in parts of Hudson Bay, Hudson Strait, Baffin Bay and at various choke points in the Northwest Passage where the ice pushed in.

There, often you could find more ice, and different kinds of ice than usual.

“Any delay anywhere has an impact on shipping,” Langis said.

For example, the NEAS vessel, MV Mitiq, is delayed due to ice conditions heading west from Pond Inlet to Cambridge Bay.

And things are unlikely to improve.

“We’re kind of in this period where we’re reaching minimum ice extent. It can happen between the first and third week of September where essentially all the ice melt has happened and we’re going back to other way and seeing new ice forming,” Langis said.

As for the weather, it’s not likely not to be warming up either.

“It was a cold summer,” said Brian Proctor from Environment Canada. As well, northern Canada saw above normal precipitation in many communities because of a low pressure front stalled over the North.

Iqaluit experienced its 13th coldest and 14th wettest year in 73 years, he said.

In Qikiqtarjuaq, where snow also came early, it was the seventh coldest summer in 22 years.

This keeps getting better!

"Didn't expect to see this when I looked out the window, tourists from the cruise ship."

Trekking with poles on the first day of snow. #StormHour #NuWeather #Qikiqtarjuaq

The past summer also brought extremes, with Arviat experiencing its 11th warmest and 10th driest summer in 30 years.