“Once they get to the Arctic, they’re hard to get rid of” Researcher Anya Gawor attaches a cylinder to the deck of the Amundsen to take air samples which will show which pollutants have travelled to the Arctic from the south. (PHOTO BY JANE GEORGE) 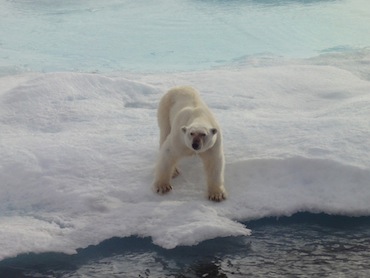 This polar bear was spotted wandering around on the sea ice near Clyde River Aug. 5 in search of food. Unfortunately, his preferred diet of seals could expose him to variety of health affects linked to contaminants. (PHOTO BY JANE GEORGE)

ON BOARD THE AMUNDSEN — Polar bears looking for food on the sea ice in Baffin Bay north of Clyde River may find seals to eat, but the seals will likely be loaded with the industrial poisons and pesticides still found in the Arctic air and water.

Living at the top of the food chain holds unseen dangers for polar bears, because they absorb toxic substances, like pesticides and flame retardants, through their diet of seals.

These man-made pollutants originate far to the south, where they’re used in agriculture and industry, even though they can lead to diseases like cancer and birth defects in humans and wildlife.

Studies show that in polar bears, these pollutants affect their hormones and liver as well as their reproductive systems, causing them develop enlarged clitorises and smaller testicles.

Two researchers on board the Amundsen icebreaker are taking samples to find out how much of these pollutants still exist in Arctic air and water.

Amongst other pollutants, they’ll be looking for traces of a pesticide called endosulfan, a leading chemical used for more than 50 years against insects and mites in cashew, coffee and tea plantations.

This enivornmental posion has now found its way to the Arctic.

Considered to be acutely toxic and extremely hazardous, endosulfan affects reproductive systems and is suspected to cause cancer in humans and wildlife.

Endosulfan has also been a major source of poisoning and deaths in Cuba, Benin and India, where people unknowingly came into contact with the pesticide.

Recently banned in the United States, it’s still legal to use in Canada.

Endosulfan is one of the pollutants that Fiona Wong and Anya Gawor from the University of Toronto expect to detect in their samples of air and water on board the Amundsen.

To sample the air, they’ve set up cylinders stuffed with foam to catch pollutants as the icebreaker travels from Iqaluit through the Northwest Passage to Kugluktuk.

Every day they empty the cylinders attached to the front deck and put the foam into a refrigerator for analysis back in Toronto.

The two researchers are looking for traces of banned persistent organic pollutants —known as POPs — and new ones, like Endosulfan.

Since the Stockholm Convention on POPs banned the use of the 12 worst pollutants in 2004, there are fewer traces of these 12— called the “dirty dozen”— in the Arctic.

But since 2004, other POPs have been found to be toxic, and nine additional pollutants will be added to the list of banned pollutants on Aug. 26.

Endosulfan and some toxic flame retardants are still not on the list.

While these are not used in the Arctic, they make their way north by “grass-hopping” through the air and water— and then they stay around.

“Once they get to the Arctic, they’re hard to get rid of because it’s so cold,” Wong says.

Another researcher on board the Amundsen is looking for methyl mercury, a chemical which can cause serious damage to the nervous system, in the sea water.

To take his samples, Igor Lehnherr puts cylinders into the water in a circular metal cage called a “rosette” and then pulls them up for later analysis.

Mercury is another hard-to-get-rid of poison, and polar bears, who eat seal after seal, end up with a lot of it in their systems, he says.

Scientists now believe poisonous pollutants like mercury and endosulfan may be released into the ocean in greater quantities as the ice melts and sea temperatures rise, another threat to marine mammals like polar bears.