“It was always about the land” 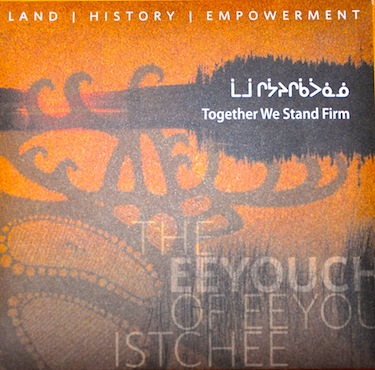 “Together We Stand Firm” tells how Cree and Inuit tried to stop Quebec from building its first massive hydroelectric project in northern Quebec during the mid-1970s.

When Billy Diamond returned home from the spring goose hunt in April 1971, his wife told him to turn on the radio.

The report he listened to said Quebec planned to build a multi-billion-dollar hydroelectric project, which would dam the rivers flowing into James Bay, from Eastmain to the south to the Great Whale river in the north.

It was the first that Diamond or any of his fellow Cree had heard about the plan, says Diamond, who died last year, in a new documentary called “Together We Stand Firm.”

“My first reaction was the impact of such a project on the people,” Diamond said in the film. “Did I just go on my last spring hunt?”

“Together We Stand Firm” tells about the Cree and Inuit efforts to halt the plan, which are still relevant today, when more hydroelectric projects are expected flow from Quebec’s Plan Nord scheme.

The 90-minute film follows the rocky negotiations which led to the 1975 signing of the James Bay and Northern Quebec Agreement, mostly from a Cree perspective.

At last month’s meeting of the Kativik Regional Government council, its vice-chairperson Joseph Annahatak encouraged Nunavik to document its own involvement in the JBNQA process.

“We need to develop a similar film about the [growth] of the Inuit and how far we have come,” Annahatak said.

“Together We Stand Firm,” produced by the Grand Council of the Crees in collaboration with the Cree Naskapi Commission, first screened earlier this year in Montreal.

The film features interviews with Cree leaders and signatories of the JBNQA, many of whom were only in their twenties.

That group included Diamond and others like Philip Awashish, Ted Moses and Robert Kanatewat.

Footage from one of the early meetings between Cree leaders and the Northern Quebec Inuit Association shows a young side-burned Charlie Watt and Zebedee Nungak in aviator sunglasses.

“We have no doubt in our mind that we own our land,” Nungak told the group. “And we’re not going to go around trying to prove it. It’s up to the people who are trying to invade it to disprove it.”

With the help of Montreal lawyer James O’Reilly, also featured in the film, Cree and Inuit succeeded in getting a 1973 injunction to temporarily halt the James Bay project.

Documentary footage shows a group of jubilant Cree and Inuit leaders, savouring what may have been their greatest victory.

But the battle wasn’t over. The negotiations that followed were lengthy and emotional and, as depicted in the film, forced Cree leaders to give up more then they wanted to.

“The spirit of the people always pulled us back,” Diamond recalled. “It was always about the land.”

Talks came to an end just before midnight on Nov. 11, 1975, when the government of Quebec premier Robert Bourassa finally signed off on the historic accord, giving Cree and Inuit $225 million in exchange for rights to the vast majority of their land base.

Interviews with different Cree chiefs in the documentary show that the agreement didn’t please everyone.

It didn’t spell the end of Cree’s fight to preserve their traditional territory and traditions either, Diamond explains in the film. Diamond said he believed it was the right move to make.

“We said ‘Let’s give our people a way of life that they know; the traditional way of life which is to hunt, trap and fish,’” Diamond said. “But at the same time, let them enter the modern industrial society if they want.”

“Together We Stand Firm” is the first in a series of four films which will follow the Cree political achievements. The next three will highlight each decade following the signing of the JBNQA.

Directed by Franziska Van Rosen and Pinegrove Productions, film runs in Cree and English, with English and French subtitles.