Most future tourists will visit remote Arctic site via computer

Fort Conger, built by A.W. Greely’s expedition in 1881, was large as a barn, and the size of its exposed surfaces made it cold and impossible to heat. (PHOTO COURTESY OF PARKS CANADA) 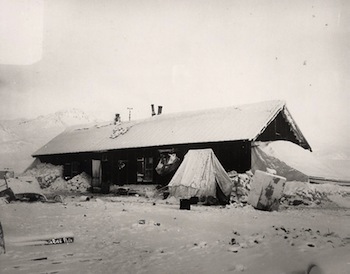 Fort Conger, built by A.W. Greely’s expedition in 1881, was large as a barn, and the size of its exposed surfaces made it cold and impossible to heat. (PHOTO COURTESY OF PARKS CANADA) 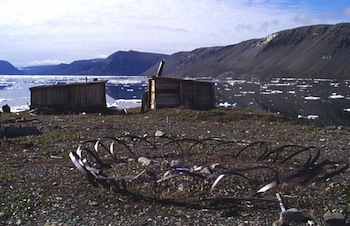 Experiments carried out by early researcher A.W. Greely at Fort Conger on Ellesmere Island included building a vegetable garden, fenced in with barrel hoops. In the foreground stand the cozy wooden houses, which explorer Robert Peary later salvaged from the original Fort Conger built by Greely. (PHOTO BY JANE GEORGE)

Due to its remote location on the northern tip of Ellesmere Island, few people will ever get a chance to visit Fort Conger, which lies in a hard-to-reach site in Quttinirpaaq National Park.

But soon, virtual visitors will be able to experience Fort Conger, thanks to three-dimensional scanning technology.

With the help of University of Calgary experts, Parks Canada plans to conduct a three-dimensional laser scan of Fort Conger this month before any more damage occurs at this historic site, where early explorers and researchers once set up camp.

When the laser scans are complete, the Calgary research team will create a computer model of Fort Conger.

Their navigable computer model of the entire area of Fort Conger will provide the foundation for future monitoring and interpretation of the site.

“The project will protect and preserve the site – virtually – ensuring its preservation for future generations,” says a recent Parks Canada information bulletin.

A second phase of the project would see the creation of a three-dimensional model for an interactive website on-line at selected museums in Canada.

So, when the project is complete, educators, students, historians and other members of the public will be able to explore Fort Conger and its stories, experiencing an important part of Canada’s Arctic history from wherever they are, Parks Canada says.

Fort Conger, located at 81 degrees latitude on the northeastern coast of Ellesmere Island across from Greenland, is accessible only to hikers and other visitors who arrive via chartered aircraft or icebreaking ships.

Only a handful of people make it to the spot every summer — and that’s in a good year, said Parks Canada’s Nunavut spokesperson Garry Enns.

More than 100 years ago, Fort Conger was an important staging point for polar expeditions.

The sailing boat, the Discovery, which wintered there in 1875 is long gone, but wooden plaques in memory of two sailors who died over that winter still remain, as do small wooden structures and other remnants from later explorers’ visits.

Here, in 1881, A.W. Greeley and 24 men were dropped off for the winter to carry out research for the first International Polar Year.

But after two full years passed with no resupply ships able to reach Fort Conger, Greeley expedition members abandoned their scientific collections and headed towards a more accessible point, ending up at Camp Clay on Pim Island.

Cannibalism and violence erupted, and only six of the original group of 25, including Greely, survived.

In the end, defeated by cold and hunger, the expedition’s ambitious projects, which had included an magnetic observatory and a vegetable garden, amounted to nothing.

From the very start, Greely’s main problem was the simple challenge of keeping everyone warm. Fort Conger, built to house the expedition, was a long rectangular wooden building, 18 metres by five metres, and three metres high.

But the size of its exposed surfaces made it impossible to heat.

In September 1881, Greely noted that five tonnes of coal had already been burned for heat. During the first winter, the building was only banked with two metres of snow.

Explorer Robert Peary, who came upon the building a few years later, said in his 1917 book called “Secrets of Polar Travel” that Fort Conger was “grotesque in its utter unfitness and unsuitableness for polar winter quarters.”

Peary eventually tore it down and built several smaller buildings, three of which still stand.

The buildings’ small dimensions, clustering and interconnectness reflected what Peary had seen in Greenland and elsewhere in the Arctic.

Peary, for example, used tunnels to join the dwellings, as well as packed snow and sod for insulation.

The new smaller structures were relatively easy to heat, although they were more separate — and perhaps less livable during the long, dark season than the more communal dwellings that Inuit favoured.

Peary, nonetheless, used Fort Conger as a base from 1901 onwards, until he finally reached — or came close to — the North Pole in 1909.

Much of what Peary and Greely left behind can still be seen in a good state of preservation at Fort Conger.

There are the wooden dwellings, as well as the mounds of tin cans, bedsteads, Greely’s garden circled by barrel hoops, broken ceramic pipes, and shards of coloured glass.

Some visitors still question why this site isn’t cleaned up. “How long does junk have to stay around until it becomes historic, anyway,” they ask.

While there is an ongoing debate about whether the rusty tin cans are worth saving, Enns said the new 3-D images of Fort Conger will provide a permanent record of what the site looks like today and eventually allow for some reconstruction of the site.