“It’ll have a very good benefit on our fisheries” 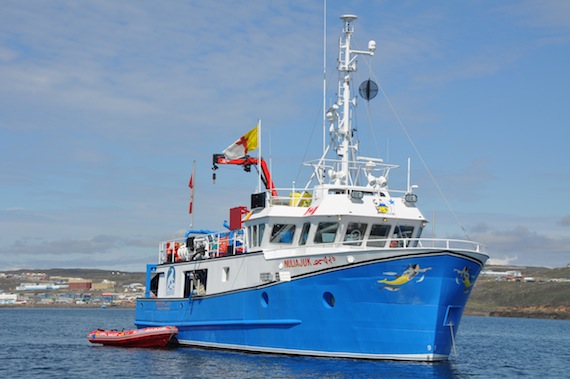 The Government of Nunavut commissioned its new research vessel, the MV Nuliajuk, in Iqaluit on July 11. The state-of-the-art vessel will be used to collect data and carry research on the territory’s fisheries. The ship is named after the Inuit sea goddess, believed to have nourished people for generations with the bounty of the sea. (PHOTO BY SARAH ROGERS) 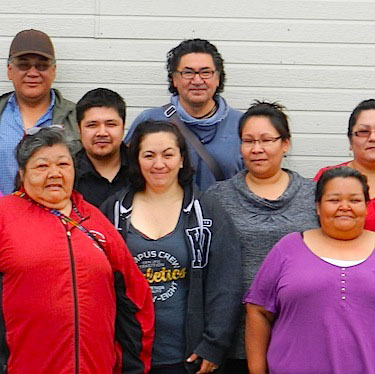 A crew member aboard the MV Nuliajuk takes Premier Eva Aariak and minister Daniel Shewchuk a tour of the territory’s newest research vessel in Frobisher Bay July 11. Officials commissioned the vessel Monday before it departs on its first research voyage to Cumberland Sound early next week. (PHOTO BY SARAH ROGERS) 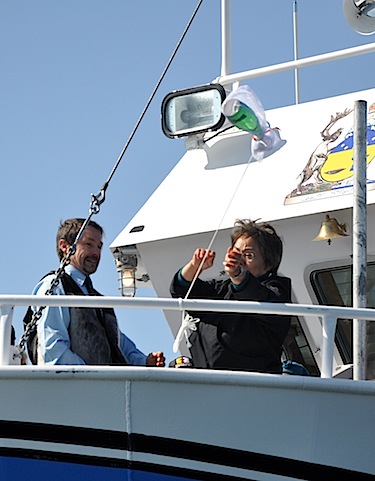 Nunavut premier Eva Aariak gets ready to throws a bottle of sparkling water against the hull of the MV Nuliajuk July 11 to christen the new research vessel anchored off Iqaluit. (PHOTO BY SARAH ROGERS)

Not to mention that the 64-foot Nuliajuk is a beauty.

Territorial and community leaders and elders gathered aboard the Nuliajuk July 11, to christen the flotating fisheries research station as it lay anchored off Iqaluit.

Nunavut Premier Eva Aariak threw a bottle of sparkling water against the ship’s hull to christen it. Maritime tradition says that a bottle of champagne must be smashed against the hull of a new vessel; if the bottle doesn’t break, the vessel will have bad luck.

“To see it all done – it’s incredible,” said Nunavut’s environment minister, Daniel Shewchuk, as he later toured the Nuliajuk with Ivan Oxford, the ship’s captain.

“Time will tell, but I think it’ll have a very good benefit on our fisheries and enhance resources for all Nunavummiut,” Shewchuk said.

The Nuliajuk will help Nunavut learn more about its potential resources as well as the environmental factors influencing the health of its fisheries, Oxford said.

On board the ship, scientists will be able to collect information on marine species, habitat and populations, using the Nuliajuk’s specialized gear, which includes long lines, otter trawls and gill nets.

New high-tech sensors will be able to monitor what goes into those nets. For example, sensing the density of fish bladders can determine the species of fish caught in nets before they’re even pulled aboard, Oxford said.

The Nuliajuk is also equipped with an auto-pilot, integrated navigation system that allow the vessel’s different functions, such as the radar and charting systems, to communicate with each other.

“It’s all the latest technology,” he said. “I’ve worked on much bigger vessels carrying cargo all over the world and I’ve never seen anything like this.”

The ship is not ice-classified, but ice-strengthened. This will allow it to push ice when needed.

The Nuliajuk isn’t large: it can only accommodate eight researchers plus captain and crew in its quarters, which include a kitchen, seating area and small rooms with double bunks.

But the ship has an artistic touch. The seats in its control room are covered with seal-skin designs, and the front bow features painted images of its namesake, Nuliajuk, the goddess of the sea in traditional Inuit lore.

Elder Lew Philips, who offered a prayer at the ship’s launch, said he hoped the ship, like its namesake, would bring Nunavummiut the bounty of the sea.

The Nuliajuk was built at a shipyard in Glovertown, Newfoundland before making its way up the Labrador coast en route to Frobisher Bay earlier this month.

After its new crew finishes up training and trials this week, the Nuliajuk will leave next week for its first research voyage in Cumberland Sound.

That research, led by the University of Windsor and the Department of Fisheries and Oceans, will tag Greenland halibut, Arctic skates and Greenland sharks.

Other research projects slated for later this summer include cod and plankton sampling and exploratory fishing around the communities of Qikiqtarjuaq and Clyde River.

The vessel will return to Newfoundland in mid-October where it’s expected to winter each year and may be contracted out to other research projects.

The MV Nuliajuk cost $3.2 million to build, about $1.8 million of which came from the federal government.

Nunavut’s Department of the Environment has dedicated $400,000 a year to operate and maintain the vessel.

The Government of Nunavut says it will work with the territory’s fisheries training consortium to encourage more Inuit trainees to work aboard the Nuliajuk.

The Nuliajuk isn’t the first fisheries research vessel to explore the waters off Nunavut.

You can still see the Calanus, a familiar eyesore on Iqaluit’s beach — a 45-foot wooden ship, suspended in a rusting cradle — thath was launched in 1949.

By the late 1970s, the Calanus was all but abandoned by the federal government. Its last active season was financed by an oil company studying environmental conditions off the east coast of Baffin Island.

And before the Calanus, there have been other ships devoted to marine research in the Arctic, beginning with the Neptune, the first Canadian vessel to observe conditions in the Arctic, which first sailed into Hudson Strait in 1884.

Several other ships were also employed by marine researchers in the Arctic between 1900 and the mid-1930s. 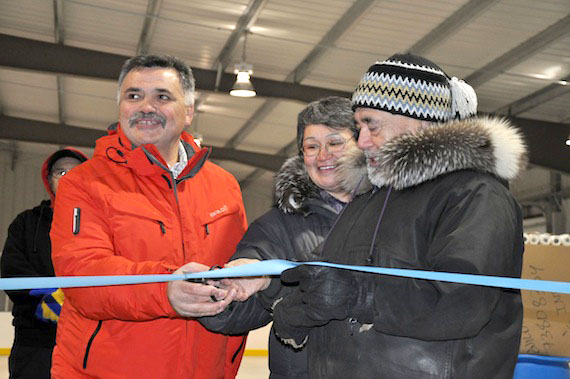