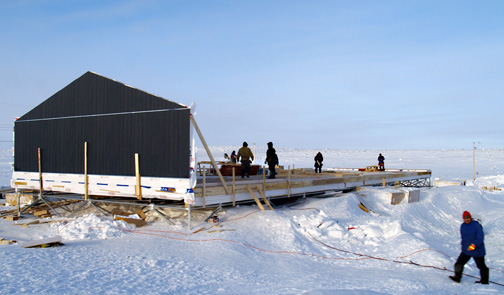 A construction crew works on a new social housing unit in Taloyoak in March of 2009. The Government of Nunavut hasn’t yet said exactly how it plans to cover $40 million worth of cost overruns from the Nunavut Housing Trust, but hasn’t ruled out budget cuts. (FILE PHOTO)

Nunavut’s finance minister says he can’t rule out spending cuts as the government scrambles to find $40 million to cover cost overruns from the Nunavut Housing Trust.

“The overriding theme in my mind is we forecast a balanced budget, so starting from that premise I’d like to see how that would be affected by the different options we’re going to explore,” Keith Peterson said May 11.

But Peterson added “there’s always the boring option” of putting off capital projects, like new buildings or infrastructure. He said Finance Department officials are working with other departments and the Nunavut Housing Corporation to work out a plan to tighten the territory’s purse strings.

The GN has to find the money because the $200-million housing trust ran $60 million over budget thanks to miscalculated labour and construction costs, based on financial management problems that date back to 2006.

Alain Barriault, the housing corporation president has said the NHC can find $20 million in savings on its own. But the GN will need to find $40 million more.

Speaking at a news conference in Whitehorse, Premier Eva Aariak wouldn’t be drawn in by a question about the government plans to cover the cost overrun.

“The ministers are looking into it, and I cannot say exactly where we are at in terms of the exact amount of dollars we’ll be finding from different sources,” she said.

The government will have to convince regular MLAs to go along with the plan. South Baffin MLA Fred Schell has already said any bailout package for the NHC will likely face skepticism from regular MLAs.

“They (the government) need to make a pretty big case,” said Quttiktuq MLA Ron Elliott May 14. “A lot of people are saying they want to see some leadership.”

Elliott said the GN should look at funnelling budgeted money for unfilled GN jobs to help make up the shortfall.

The one thing that appears to be off the table is cutting back on the more than 400 houses that are to be build this summer under the Nunavut Housing Trust.

“The bottom line is we need houses,” Elliott said.

Peterson said Hunter Tootoo, the housing minister, was to make a presentation to regular MLAs during a full caucus meeting later this month and outline the government’s planned response.

The 2008 Auditor General’s report on the NHC singled out the lack of financial and project managers as a problem for the corporation. NHC did get the go-ahead last year to add 14 staffers with those skills, and the housing trust debacle was discovered by a new chief financial officer, Lori Kimball, who started in December, 2009.

“I’m under no illusions that our financial management is perfect,” he said.