Nunavik, Nunavut trail much of the developing world 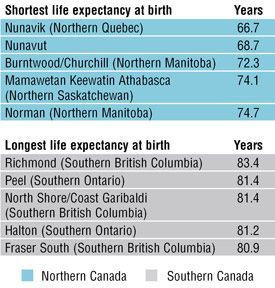 This table shows life expectancy for regions in northern and southern Canada. (IMAGE/CENTRE FOR THE NORTH)

A new map issued by the Conference Board of Canada’s Centre for the North shows Nunavik and Nunavut lag far behind the rest of Canada when it comes to life expectancy.

Nunavik’s life expectancy is worse, the Centre for the North notes, than Uzbekistan and Iraq and is below the world average of 67.2 years. If Nunavik was an independent country, it would rank 133rd in the world, the report states.

Nunavut does not fare much better. A Nunavut baby born today can expect to live 68.7 years, a figure that’s worse than the United Nations estimates for 119 countries.

Life expectancy in the Northwest Territories and Yukon is higher: 76.2 years and 76.8 years respectively.

“[T]here are only a handful of health regions in southern Canada where people would not expect to celebrate their 78th birthday; conversely, there are few regions in Canada’s North where people can expect to live that long,” the Centre for the North noted. 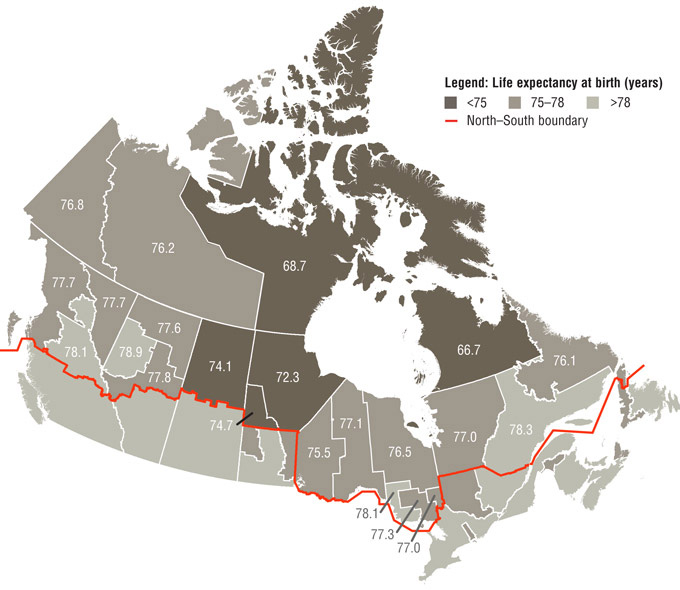 Nunavik, Nunavut, northern Manitoba and northern Saskatchewan have the worst life expectancy in Canada. (IMAGE/CENTRE FOR THE NORTH)