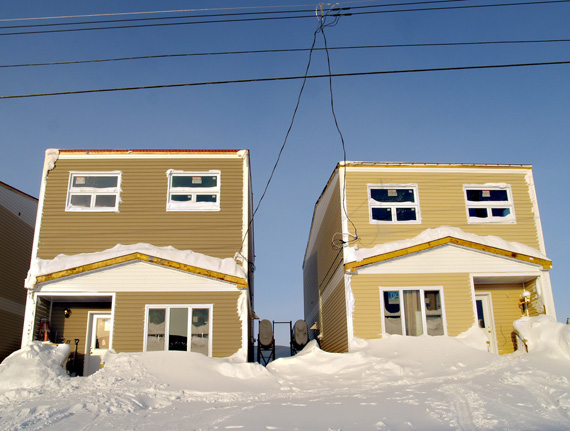 Two incomplete houses in Phase 2 of the Plateau Subdivision are covered in snow Feb. 9. A study released this month by the Canada Mortgage and Housing Corporation shows rents in the capital rose 4.5 per cent last year, while the average sale price of a home was flat. (FILE PHOTO)

Apartment rents rose in Iqaluit last year, while housing prices barely budged, according to new figures from the Canada Mortgage and Housing Corporation.

The study found the average monthly rent for an apartment in the capital climbed 4.5 per cent last year to $2,300 per month.

That’s because Iqaluit’s vacancy rate declined to 0.6 per cent in 2009, down from 0.8 the year before, the study found, despite the growth of the rental market by almost 70 units last year.

Two-bedroom apartments saw the smallest monthly rent increase, at 2.5 per cent, to an average price of $2,206 per month. The figures include private-sector rentals only, not social housing units.

The number of real estate sales dropped 40 per cent last year, which could explain stagnant sale prices. However the city did issue $34.7 million worth of residential development permits in 2009, nearly triple the previous year’s amount.

Development in the Plateau subdivision drove most of that business, the study said.

“Commodity prices are staging a recovery, creating an environment to further drive investment and job opportunities,” the CMHC said in its report.