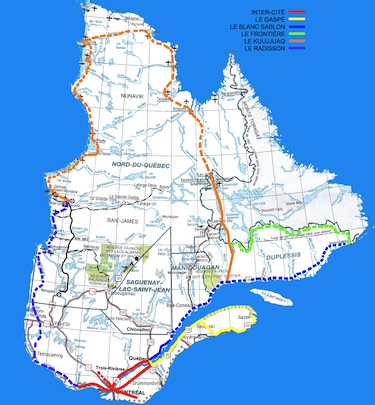 The Trans-Quebec Express wants to see a railway built that would link the entire province, including a route that would reach 11 of Nunavik’s 14 communities. Makivik’s proposals for the region’s future aren’t quite as ambitious, but they do include either roads or railways. (COURTESY TRANS-QUEBEC EXPRESS)

Makivik Corp. has a vision for the future in Nunavik that includes better airports, ports and a road or railway link to southern Quebec.

Makivik says either a road or railway between Kuujjuaq and Shefferville and from Kuujuaraapik to Radisson could be realized by 2035.

Besides offering better access to and from the region, Makivik says these projects and others would reduce the high cost of living for Nunavimmiut.

The plans are laid out in a brief submitted last week to Quebec’s parliamentary commission of transport and the environment by a Makivik lawyer Jean-François Arteau, who prepared L’accès au territoire du Nunavik (access to the territory of Nunavik) for the hearings at Quebec’s national assembly Sep. 23.

In this document, Arteau spells out Makivik’s goals for transport across the region between 2015 and 2035, which are also likely to be front and centre in Quebec’s Plan nord, expected later this autumn.

By 2015, Makivik, along with the Kativik Regional Government and its regional airlines say they want to see:

• the extension of Kuujjuaraapik’s runway to 6,500 feet;

• financial support towards an Air Inuit “aeronautical complex” at Montreal-Trudeau airport, which will include a training facility.

By 2035, officials say they will pave airport runways in both Kuujjuaraapik and Puvirnituq, to maintain the jet service when the B737-200 will be replaced by newer aircraft not approved to land on gravel.

But with the changeover from the federal Food Mail program to its replacement, Nutrition North, many items are no longer admissible through air travel, says Arteau’s brief.

So to keep the price of many goods as low as possible, he says the region also wants to improve marine transport.

Over the next five years, Makivik wants to study the construction of deep sea ports in Kuujjuaq and Kuujjuaraapik, and see these ports built by 2035.

Makivik is also looking into a marine transportation subsidy program similar to one available for the residents of Quebec’s lower north shore region.

These and other measures will also be an important tool in reducing poverty and improving the standard of living for Nunavimmiut, adding that transportation costs drive prices up 20 per cent higher than in the south.

The parliamentary commission that this brief was prepared for came together to learn more about the TransQuébec Express, a non-profit group with an ambitious pitch to build 10,000 kilometres of railway circling the province.

The northern part of the railway, dubbed the Kuujjuaq, would extend the existing rail link from Shefferville north to Kuujjuaq and loop around the Nunavik coast to Kuujjuaraapik.

While deemed impossible by some, a petition with more than 3,800 signatures in support of the project was tabled at Quebec’s national assembly last spring.