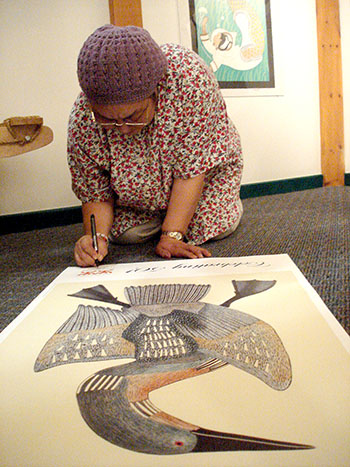 Mayoreak Ashoona, 63, a Cape Dorset artist who now lives in Iqaluit, autographs a poster of “Tuulirjuaq” (The Great Big Loon) at Iqaluit’s Nunatta Suunakkutaangit Museum on Oct. 15. Her loon print is reproduced on a poster commemorating the 50th anniversary of the Cape Dorset print collection. (PHOTO BY JANE GEORGE) 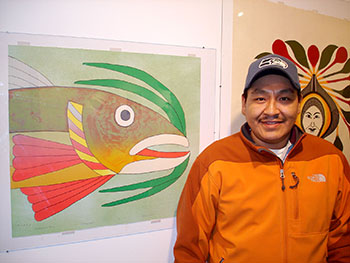 After an artist draws an image, Niviaxie Quvianaqtuliaq’s job starts. Quvianaqtuliaq, 39, who has spent 10 years learning the art of printmaking, says it can take many tries to find just the right combination of colours to bring an artist’s drawing alive as a print. (PHOTO BY JANE GEORGE) 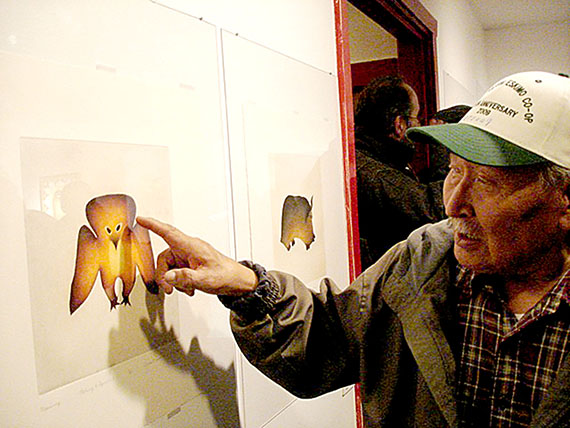 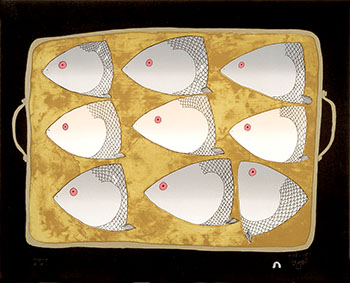 Ningeokuluk Teevee, one of the younger artists at Kinngait Studios, produced the drawing for this print called “Arctic Appetizer,” which is included in the 50th anniversary collection of Cape Dorset prints. (PHOTO BY JANE GEORGE) 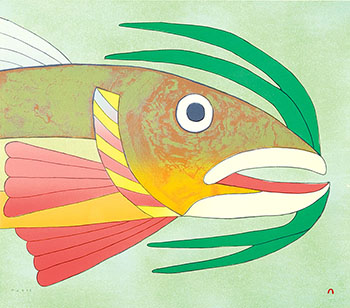 “Iridescent Char” by Kenojuak Ashevak is among the 36 prints included in the 50th anniversary collection of Cape Dorset prints. (PHOTO BY JANE GEORGE)

You don’t have to ask artist Ohotaq Mikkigak how he feels about his 50 years of work with Cape Dorset’s West Baffin Eskimo Co-operative.

You can see it in his eyes, which light up when he talks about how the drawing he produced for a print of a wide-eyed baby owl.

Mikkigak, who sports a cap honouring the 50th celebration of the co-op and a jacket decorated with the mark of the co-op’s Kinngait Studios, says he’s in awe of the talent displayed over the past 50 years in Cape Dorset.

Speaking at the launch of the 2009 Cape Dorset print collection at Iqaluit’s Nunatta Sunakkutaangit Museum, Mikkigak also recalled the efforts of the late John Houston (known as Saumik because he was left-handed).

Saumik arrived in Cape Dorset in the early 1950s with ideas that would change the lives of people living there and introduce Inuit art to the world.

Houston, a northern services officer, worked with Mikkigak and others to create prints and handicrafts at Kinngait Studio’s first home, a 512 buiilding called the sananguavik, the place where things are made.

There, Saumik encouraged Inuit to make drawings from their isumanniivit, their own thoughts.

This philosophy still guides Mikkigak, 73, who began drawing in the early years of the print program. Mikkigak produced his first print, “Eskimo Fox Trapper,” in 1961, two years after the first Cape Dorset print collection of 1959.

This year’s 50th anniversary print collection includes three images by Mikkigak — the winsome baby owl (“Uppiaraq”), a curious-looking musk-ox (“Startled muskox”) with a cocked head, and a polar bear eyeing a seal in “Face to face.”

The Nunatta Sunakkuutangit Museum brought Mikkigak and other artists to Iqaluit for the launch of 2009 collection, which contains 36 prints, priced from $400 to $1,200.

At the launch, Mikkigak sat with Tim Pitsiulak, 42, Mayoreak Ashoona, 63, creator of the “Tuulirjuaq” (The Great Big Loon) print — also reproduced for the 50th anniversary collection poster — and printer Niviaxie Quvianaqtuliaq, 39, who spent 10 years learning the art of printmaking from his uncle, master printer Pitseolak Niviaqsi, 62.

Nunavut Commissioner Ann Meekitjuk Hanson says she felt “joy and nostalgia” when she looked at a print called “The Peterhead Returns” by artist Kananginak Pootoogook, 74.

The image evokes the memory of the late camp leader Pootoogook, whose peterhead boat kept many Inuit supplied with food, Hanson said.

But encouraging new, younger artists to express themselves and promote the stories that fueled Cape Dorset’s art is a challenge, according to Jimmy Manning, a longtime former co-op manager.

New artists must “move on and find their own way ahead,” Manning says in a brochure on the 50th print collection.

The award-winning artist, Kenojuak Ashevak, 82, probably the best known of all Cape Dorset printmakers, wrote in 1993 about changes she has seen at the Kinngait Studio in “The light is still on.”

“When I look around at who is still drawing, it feels like we are babysitting, waiting for the departed ones to come back, knowing that they are not coming back, it feels like the light is getting smaller and smaller,” she writes.

But this past week, the light still was shining brightly.

It was shining in Iqaluit, in Cape Dorset where a variety of festivities were planned, and in Ottawa where Michaëlle Jean, governor general of Canada and the patron of the 50th anniversary year, invited artists Ashevak, Pootoogook, Ningeokuluk Teevee and Leslie Boyd Ryan, director of Dorset Fine Arts, the marketing arm of the West Baffin Co-op, to Rideau Hall for tea.

The print collection’s 50th anniversary celebration will continue over the next week.

On Oct. 22 the National Gallery of Canada opens a new exhibition, “Uuturautiit: Cape Dorset Celebrates 50 Years of Printmaking” in Ottawa.

And can Cape Dorset look forward to 50 more years of printmaking?

“Undoubtedly there will be those anticipated frustrations, successes and failures as there have been in the past. But the Kinngait Studios, with their future stable of artists and dedicated staff, will still be here in 50 years,” Ryan says in his introduction to the 2009 collection.