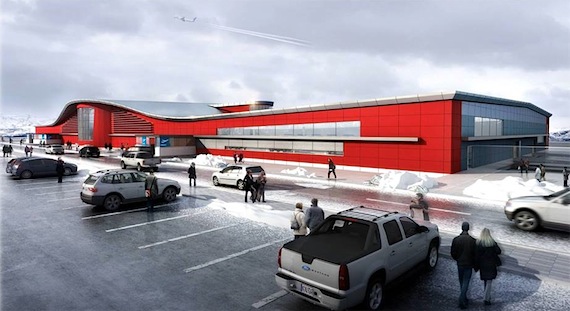 Designs for Iqaluit’s new airport terminal, pictured, were made public Sept. 17. The building is part of a $300 million airport improvement project, to begin May 2014 and finish in 2017. The terminal will cover about 100,000 square feet, three times the size of the old building. Designed and built by a consortium of private companies called Arctic Infrastructure Projects, the building’s low curved shape will minimize snow drifts and maximize natural daylight. (COURTESY GOVERNMENT OF NUNAVUT)

The Government of Nunavut and a business group called Arctic Infrastructure Partners unveiled plans to rebuild the Iqaluit airport after signing a deal Sept. 17 for the design, construction, financing and maintenance of the $300 million project until 2041.

The upgraded airport’s centre-piece will be a terminal building three times larger that the old yellow building.

Located at the airport’s large apron near the Ukkivik building, the new building will face tarmacs and runways from a location accessible via Federal Rd.

The low-lying building will hold more than 9,000 square metres of space, sprawled out mostly on a single ground floor, architect Noah Best said.

“It was important for us that this building be an integral part of the community,” he said.

The building’s shallow curved roof not only suits the landscape of the city, but is engineered to help prevent snowdrift accumulation. Tall windows facing the tarmac on the south side will allow natural light to shine deep into the terminal, he said.

The terminal’s red colour will make it stand out as well as the old yellow terminal, and is in keeping with the colours of other buildings in the city, Best said.

The “Iqaluit International Improvement Project,” as the Government of Nunavut calls it, includes urgent upgrades to almost every piece of infrastructure on the site.

The new terminal will answer the need for more space for future expansion. Other upgrades are attached to the project, so “it’s actually several projects put together,” Hawkins said.

This includes repaving of the runways and aprons, which are 20 years old, and upgrades to the landing system, which is 25 years old, he said.

Also lined up for construction is a “combined services” building, which will house vehicles and airport safety equipment. That building will be located on an empty piece of land accessible by the current Airport Rd.

The old terminal will stay in place, according to project leaders, and continue to house administrative offices.

Construction of the new buildings will begin May 2014. All work, including paving, will be completed in December 2017, project leaders said.

Arctic Infrastructure Projects will operate and maintain the facility for the duration of the project, and up to 2041, through a public-private partnership with the Government of Nunavut.

“This project will ensure that the Iqaluit airport continues to serve as the largest business gateway to Nunavut,” Nunavut MP Leona Aglukkaq said in opening comments at the small signing ceremony with AIP in Iqaluit. “Airport infrastructure is important throughout Canada, but in Nunavut it plays an even greater role in connecting people and our communities to the rest of the country.”

The four companies that form Arctic Infrastructure Partners are:

• Colas Canada Inc. — A subsidiary of Bouyges that specializes in road construction and transportation infrastructure.

• The Winnipeg Airports Authority — A “community-owned” entity that runs Winnipeg’s James Armstrong Richardson International Airport. The GN describes them as the “service provider.”

The Arctic Infrastructure Partnership group won the job after beating out two other consortiums who had made the GN’s shortlist, following the issuance of a request for proposals.

The group recently sold $141.98 million worth of bonds to 10 buyers at a coupon rate — the interest rate at time of sale — of 5.092 per cent, through a private offering handled by the CIBC, to help finance the project.

The bonds mature by June 30, 2047 — the date when those who loaned money to the project by buying bonds would be expected to get all their money back, and when interest payments stop. Bonds can usually be bought and sold in the open market prior to their date of maturity.

P3 Canada, a federal agency, contributed $77.3 million to the project.

(with files from Jim Bell)