Traditional Inuit knowledge could fill the gaps left by science 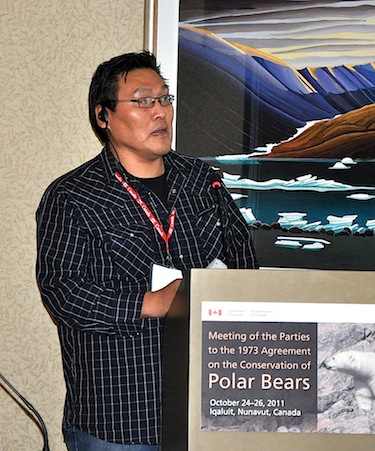 Canadian delegate Gabriel Nirlungayuk, the director of wildlife at Nunavut Tunngavik Inc., who met with officials from Denmark (Greenland), Norway, the United States and Russia Oct. 24, says many of these countries base their polar bear management systems on science alone – rather than tapping into the knowledge of Inuit hunters.

“Our concern is there’s a lot of scientific information,” Nirlungayuk told Nunatsiaq News. “And it’s very expensive to do scientific studies. [But] there are a lot of boundaries for [polar bear] sub-populations that haven’t been inventoried. What we feel could fill the gap is traditional knowledge, but it’s not widely considered.”

The Iqaluit meeting gathered all the signatories to the 1973 Agreement on the Conservation of Polar Bears, signed by Canada, Denmark (Greenland), Norway, the United States and Russia, to co-ordinated polar bear management internationally.

But that agreement does not mention traditional knowledge, Nirlungayuk said.

Since 1973, Canada has also signed agreements with the U.S. and Greenland for the joint management of their shared polar bear subpopulations.

“Canada has stated its importance, and I think Greenland sees the importance of traditional knowledge,” Nirlungayuk said. “But we haven’t heard that from other counties.”

Canada’s delegation at the meeting includes officials from Environment Canada and the Government of Nunavut as well as representatives from Inuit organizations.

“Polar bears are a very iconic species – and that’s a good thing,” Nirlungayuk said. “However, we want to say that we’re not concerned about the species. We have a good system here in Canada. We’re conserving them.”

Some communities have reported high human-polar bear contact in recent years, and Nirlungayuk said that’s a concern that must be addressed in polar bear management “because protecting life and property is important too.”

Polar bear hunting remains illegal in Norway, for example, while in Greenland, the government is working on a national action plan for polar bears.

The Iqaluit meeting wraps up Oct. 26 with a report on the current state on polar bears.

After the last meeting of the parties to the 1973 agreement, in 2009, participants acknowledged that “climate change has a negative impact on polar bears and their habitat and is the most important long term threat facing polar bears.”