Cambridge Bay due to get 600,000 pounds of cargo via air, tender request says 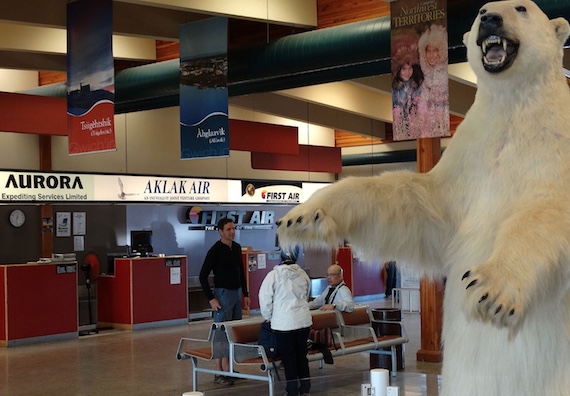 Some 600,000 pounds of cargo destined for Cambridge Bay are to arrive by air via the airport in Inuvik, whose terminal is shown here. (PHOTO/ WIKIPEDIA COMMONS)

CAMBRIDGE BAY—The Government of the Northwest Territories plans to airlift in some cargo to western Nunavut, after the cancellation of the last resupply barge. But a peek at the request for tenders released on Oct. 9 for an aircraft charter reveals the limits of what may make it in by air.

For Cambridge Bay, the 600,000-pound limit is likely to be quickly surpassed by the multiple heavy orders now sitting in a heated warehouse in Inuvik.

Last week, the GNWT promised to airlift in cargo that had been destined for Kugluktuk and Cambridge Bay on its Marine Services Transportation barge, which was cancelled on Oct. 1.

When GNWT and MTS representatives spoke via telephone to a meeting in the Cambridge Bay hamlet chambers this past Wednesday night they confirmed they had issued such a tender.

But they said they did not have the weight and volume of the cargo listed in the request to share with those present.

The request for tenders, obtained by Nunatsiaq News, closed yesterday at 3 p.m.

For Cambridge Bay, these amounts are likely to be filled quickly.

A garbage truck, which the Hamlet of Cambridge Bay is waiting for, may weigh up to 80,000 pounds. And with about 30 pick-up trucks due into town, each weighing up to 7,000 pounds, the total for these alone may be more than 210,000 pounds.

That’s not counting the sewage and water trucks ordered by the hamlet, the many pallets of pop expected by one business and many sea cans expected by another, with about 270,000 pounds of cargo, including stoves and refrigerators.

“I would like to see my materials, but I don’t think I will,” said Stuart Rostant, who had to cancel a planned four-plex housing project because his building materials never arrived.

Yet another local business in Cambridge Bay is waiting for nearly 17,000 pounds of materials for construction jobs around this community of about 1,900.

The GNWT said it reserves the right to award multiple contracts, with multiple airlines, to gain “best value for the government.”

Bidders were asked to supply their availability to fly, the kinds of aircraft they would use, how much they could fly and the number of trips they would make per location, along with a complete price breakdown.

The GNWT said it would source expediting and ground services.

John Vandenberg, the GNWT’s assistant deputy minister for infrastructure; Kelley Ryder, the senior communications officer for the Department of Infrastructure; and Derrick Briggs, the director of MTS, who were on the line with those in Cambridge Bay, said they would return to Cambridge Bay on Monday for a public meeting, which initially had been planned for Oct. 10, but later cancelled.

That meeting has now been confirmed, with Vandenberg and Ryder in from Yellowknife, and will take place at 5:30 p.m. at the Luke Novoligak Community Hall.