Ancient Nunavut Inuk rises again to teach us about the past

Canadian Museum of History exhibit contains replica of Thule man, based on remains 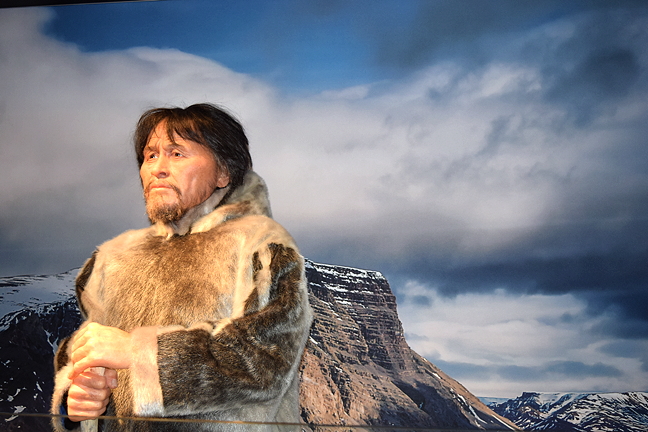 Meet Nuvumiutaq, a replica of an 800-year-old Thule man, believed to be about 40 when he died near Arctic Bay. His remains, and burial artifacts, were found in 1959 and formed the basis for this model, included in an new exhibit on the history of Canada’s Indigenous peoples, open to the public this July. (PHOTOS BY COURTNEY EDGAR) 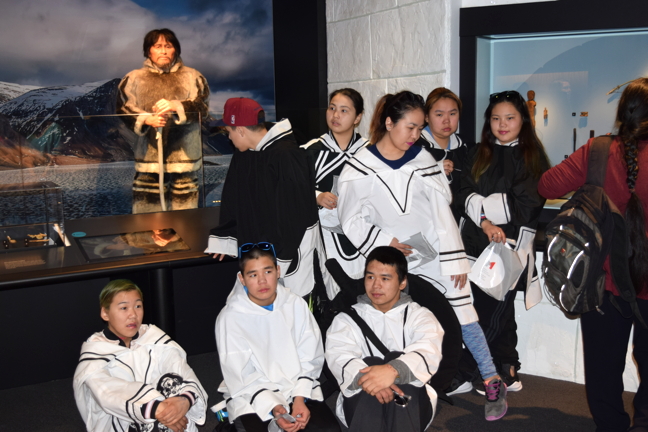 Students from Arctic Bay, and other Nunavummiut, stand near Nuvumiutaq, a remarkably real looking replica of a Thule man from the Arctic Bay area. Museum staff invited their Inuit guests for a sneak peak of the replica in advance of the public unveiling this July.

OTTAWA—He stands five feet, two inches tall, with a strong, athletic body, dressed in seal skin and holding a walking stick. Appearing about 40 years of age, he has wrinkles around his eyes and a weathered face which indicate the harsh demands of the life he must have lived.

Small hairs sprout from the tops of his hands which emerge from a sealskin coat.

Looking proud as he stares into the distance, he stands against an Arctic backdrop and behind a pane of glass.

His name is Nuvumiutaq and he is made of clay and silicone.

On March 26, the Canadian Museum of History in Gatineau unveiled to a private group their long-awaited scientific reproduction of the Thule Man—an Inuk ancestor thought to be about 800 years old, and whose remains were found in 1959 near Arctic Bay.

The remains, and the artifacts buried with him, have been in museum storage ever since but they are now a part of a repatriation project with the Inuit Heritage Trust; once photographed, studied and their details fully recorded, they will all be returned to Nunavut.

Meanwhile Nuvumiutaq, the Arctic Bay kayaker, will be part of an exhibit on Canada’s Indigenous peoples in the museum’s new Canadian History Hall, scheduled to open to the public in July 2017, in time for Canada’s 150th birthday.

But museum staff decided to give some Nunavummiut a sneak peek at Nuvumiutaq—a group of Grade 9 students from Inuujaq School in Arctic Bay as well as Philip Kalluk, the former mayor of Arctic Bay, Eva Aariak, former premier of Nunavut, and William Beveridge, the president of IHT.

Collaboration with Inuit elders and the Arctic Bay community guided the creation of the exhibit and details of the Thule Man. Arctic seamstresses designed and sewed his sealskin clothing and community members helped to develop the expression on his face and positioning of his body. They wanted him looking off in the distance with an expression of pride, as if reflecting on his life.

According to Dr. David Morrison, director of research and content for the new Canadian History Hall, one of the guiding principles of creating this exhibit is “multiple perspectives.”

One section of the exhibit shows Canadian history from 4,000 years ago and focuses on the relationships between people and the land, and people and animals.

Another section of the hall features a variety of art from the Dorset peoples, including a tiny carving nearly 4,000 years old of an elderly woman’s face with tattoos.

Polar bear effigies of all sizes, and faces of the dead, are also in the collection.

Janet Young, the curator of physical anthropology at the history museum, worked with Nuvumiutaq’s remains and also collaborated with the forensic sculptor to make sure the replica would be as close to real life as possible.

“Bone is adaptive,” Young said. “It changes depending on how you use it. So when you do something over and over again, you can actually see that on the bone.”
According to Young, the remains and corresponding burial artefacts tell a lot about the man’s life. He was found with a bow drill that had been carved with images of little people all across the length.

Upon examination, she realized that what she saw on the bow drill “was not just random doodles,” but was reflective of his life—starting with drawings of a child and ending with a man using a walking stick, with lots of kayaking and hunting in between.

Either he, or someone near to him, had drawn his life story on the tool.

According to Young, when she compared the drawings to the details of the remains, she could tell that the man was a kayaker and a hunter. The marks on his bones showed a repeated movement back and forth, such as using a double-bladed kayak paddle.

Young could also tell that he used his harpoon with his left hand, had arthritic toes, and had lived through serious injuries.

Traumatic injuries apparent on the skeleton indicated that he had likely crashed on a dog sled, perhaps falling off a cliff, sustaining a broken leg, ankle and foot, breaks in his spine and ribs—two vertebrae were fused together—and a whiplash injury.

He went through a lot but he kept moving through it all, Young said. She could tell by looking at the bones.

“They don’t heal properly when you keep moving,” Young said.

“So throughout all these injuries, the adaptive changes are very interesting but the changes to the trauma told the story of a person who was extremely resilient to survive all that and to keep moving despite having something that in this world, and this day and age, would leave you in a hospital bed for a month.

“And yet he was still moving. It speaks to the strength that he had to survive.”

One of the Arctic Bay students, Vincent Oyukuluk said that he thought this exhibit at the museum is important so “people can learn more about Inuit culture.” His favourite part was the Thule Man replica and how strong he seemed.

“It was amazing,” said Joshlen Ipeelie, another student. She really liked the sealskin clothes that Nuvumiutaq wore and that it seemed accurate based on the story drawn on the bow drill.