Remains, artifacts found in 1959 tell a story of prehistoric Inuit life and struggle 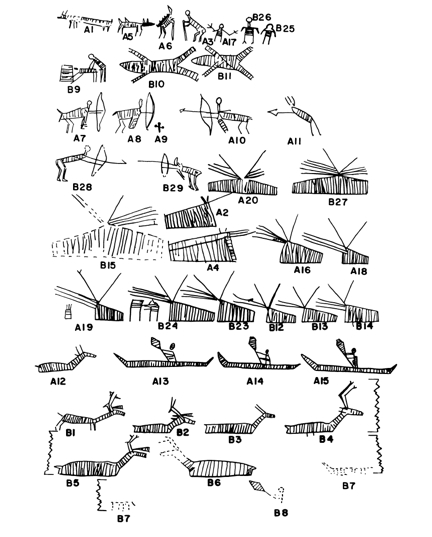 Drawings based on bow drill engravings showing, at top, elders and children, sexual relations (B9), possible conflict (A7, A8, A10) as well as caribou and kayaking. 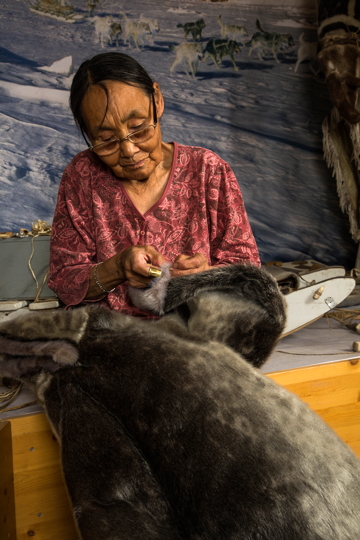 Arctic Bay’s Olayuk Kigutikakjuk sews traditional sealskin clothing for a replica Thule ancestor who will be featured in a new exhibit of Aboriginal history at the Canadian Museum of History in Gatineau, Que. The replica was inspired by actual prehistoric human remains and artifacts discovered near Arctic Bay in 1959. (PHOTO BY CLARE KINES) 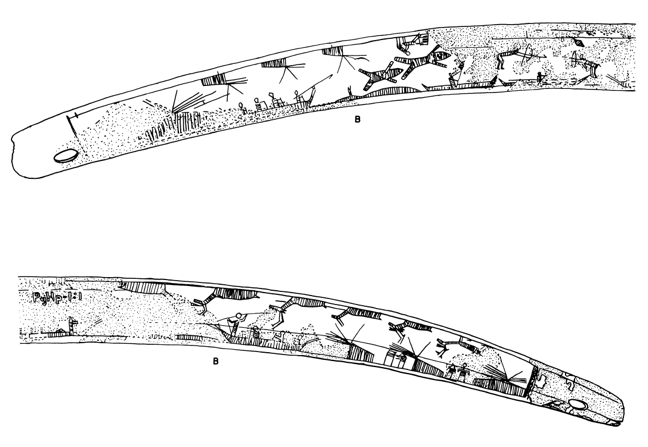 Drawings on one side of a bow drill found as part of the Arctic Bay Thule man’s burial objects showing scenes of hunting and kayaking. The drawings accompanies a 1983 article in the Arctic Anthropology journal.

OTTAWA—A Thule man who lived near Arctic Bay hundreds of years ago will soon be part of an exhibit on Canada’s Indigenous peoples to be unveiled at the Canadian Museum of History in Gatineau in July 2017 to coincide with Canada’s 150th birthday.

Although no one knows his name, his remains—uncovered in 1959—and the artifacts buried under stones with him, tell a rich story of his life and his community long before Sir John Franklin and other European explorers set foot in Canada’s Arctic.

And, with help from community members, knowledge of anatomy and biomechanics, and the expertise of a human model maker, museum curators hope to bring the past into the present with a replica of that prehistoric Inuk man.

Most of the man’s history is literally written on his artifacts and bones which show that he was a five-foot-two kayaker and hunter, he used a harpoon with his left hand, he was tough and heavily muscled, and was around 40 when he died.

“We thought that he would make a great ambassador for the Inuit because he had led such a hard life. He had multiple traumatic injuries to his skeleton and he adapted to everything to survive in the Arctic,” said Janet Young Sept. 30, a curator at the history museum in Gatineau.

Young and Matthew Betts, who is lead curator for the museum’s Indigenous exhibit, aren’t prepared to reveal everything yet, such as the estimated age of the remains and the name that Arctic Bay elders have given the Thule man.

According to Betts, the Thule Inuit inhabited the Canadian Arctic between 1200 and 1400 AD. About 600 years ago, colder temperatures prompted them to change from bowhead whaling to sealing on the sea ice, he said.

The man’s actual bones will not be used in the exhibit and, while the remains have undergone intensive examination, they have been handled only minimally, out of respect for the deceased, Betts said.

Museum staff scanned the skull to make a three-dimensional cast to be used to flesh out a mannequin for the museum exhibit.

The Thule kayaker wasn’t actually in the original plan for the Indigenous exhibit.

In fact, the remains and artifacts were being prepared for repatriation to the Inuit Heritage Trust, which had put in a request years ago for the man and his burial objects to be returned north.

The grave cairn had been excavated by a pair of archeologists in 1959 after they were led to the site’s location on the Uluksan Peninsula by an Inuk named Ipiq.

According to a 1983 Arctic Anthropology article, the remains included a man with an arthritic spine and a healed fractured leg, an infant, and a series of “grave goods” including a snow knife, a bird dart and arrow shaft, fishing lures, bola balls for snagging small animals and 24 ivory or walrus tooth bird figurines.

The most impressive artifact was an ivory bow drill, a traditional Inuit tool used to make friction for fires and to bore holes. The bow drill is elaborately decorated with people, animals and community scenes including hunting, sex and conflict.

For several years, Young examined the collection, taking a detailed inventory and recording all aspects of the remains and artifacts prior to sending them back to Nunavut.

Betts, who was putting together the exhibit on Aboriginal history, began talking to Young about the Thule kayaker she was studying and the two decided it would be ideal to include him in the exhibit.

In November 2015, Young went to Arctic Bay to talk to community members about the project to make sure they understood what the museum was planning to do and to get their approval before proceeding.

“We knew we wanted to bring visitors face-to-face with someone who lived in the past in the Arctic,” Betts said.

“We thought it would allow people to understand what it took to survive and his story was so compelling, it was somewhat irresistible to us, so that’s when the collaboration began. We approached Arctic Bay immediately.”

Not only did the community support the project, Young said, they helped answer some of the questions archaeologists had about how the man’s leg might have been injured (a dog sled crash), what he might have looked like and the clothes he might have worn.

The museum commissioned some local seamstresses to make traditional clothing for the Thule man and curators are hoping next to record video interviews with Arctic Bay elders to include in the interactive exhibit.

“We were very pleased with the positive response. They see the value of reconstructing this man’s image in physical form and in telling the story, as a means of telling about survival in one of the harshest places in the world,” Betts said. “We’re very lucky. They’ve been very engaged.”

They have sent the man’s dimensions, historic photos and other details to Elizabeth Daynès, a woman in France who specializes in making historic human replicas for museums and other institutions.

It will be her job to bring the Thule kayaker to life with artificial flesh and hair and if the photos on her website of past works are any indication, expect the Arctic Bay man to look stunningly real and alive.

You will be able to view the Arctic Bay kayaker at the museum after July 1, 2017.