“It’s been a tremendous success” 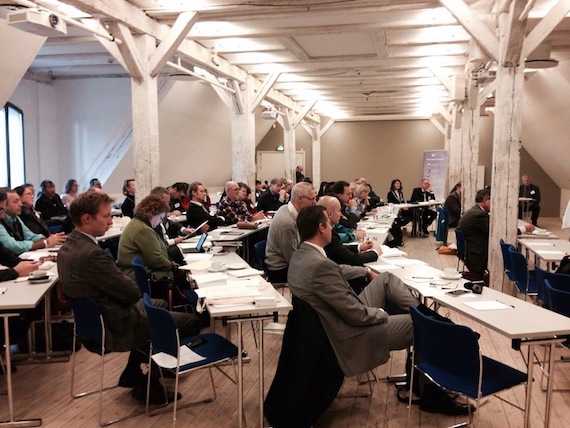 Representatives of the circumpolar region’s indigenous peoples met in at the North Atlantic House in Copenhagen Nov. 27 to celebrate the 20th anniversary of the Indigenous Peoples Secretariat, the support secretariat for the six international indigenous peoples’ organizations that are Permanent Participants to the Arctic Council — ICC, Arctic Athabaskan Council, Aleut International Association, Gwich’in Council International, Russian Association of Indigenous Peoples of the North and the Saami Council. (PHOTO COURTESY OF THE IPS) 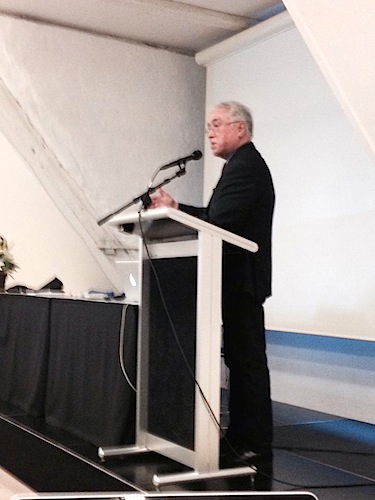 Celebration and caution — these were the themes explored by Aqqaluk Lynge, the former international chair of the Inuit Circumpolar Council, when he spoke Nov. 27 about the early struggles of indigenous peoples globally and how Arctic indigenous peoples’ began to connect to one another.

They met in Copenhagen Nov. 27 to celebrate the 20th anniversary of the Indigenous Peoples Secretariat, the support secretariat for the six international indigenous peoples’ organizations that are permanent participants on the Arctic Council — ICC, the Arctic Athabaskan Council, the Aleut International Association, the Gwich’in Council International, the Russian Association of Indigenous Peoples of the North and the Saami Council.

“You have all individually and collectively a very good reason to congratulate yourselves with the accomplishments working for the rights of indigenous peoples and for the many Arctic peoples throughout the circumpolar world that have finally got the ear of their governments or the world powers,” Lynge told former IPS board members, staff, indigenous peoples organizations and friends of IPS, who participated in a Nov. 27 workshop around the theme, Building on Indigenous Achievements in the Arctic Council, held at the North Atlantic House in Copenhagen.

In his address to the group, Lynge also referred to the Nov. 28 election in Greenland, slamming past government actions and omissions, which he said “have had a negative influence.”

“It started with the past leaders’ boycott of the Arctic Council foreign ministers meeting in Kiruna last year, and unnecessary comments about sensitive issues that brought Greenland’s reputation into a limbo. I hope that the voters in Greenland also have that in mind when going to the ballots tomorrow,” Lynge said.

These comments followed the release of a new poll on the Nov. 28 election, which shows the Inuit Ataqatigiit party slightly trailing the Siumut party.

“Our own leaders have an obligation to learn of and from the international Inuit diplomacy,” Lynge said.

“It’s up to the electorate to remember, why the government collapsed — the first time in Greenland’s history. Greenland needs to re-establish its reputation after the disastrous leadership that only lasted 18 months.”

Lynge also offered personal anecdotes from his involvement in the promotion of Arctic indigenous rights, noting “it is no coincidence that we are here in Copenhagen today.”

Lynge told how he was president of the Greenlandic Students Council from 1971 to 1976.

“We were discussing our future and the future of our country. Thousands of the Greenlandic youth were spending their early adulthood in Denmark and inspired by revolutions and the fight for independence for oppressed people all over the world by the end of the 60s and the beginning of the 70s,” he said. “We found out that we were not alone and our fellow Inuit and other indigenous peoples lived under similar circumstances, either being a colony or in another form of colonial rule.”

Representatives of the Arctic indigenous peoples met at a conference “organized by themselves,” the Arctic Peoples’ Conference in Copenhagen, Nov. 22 to Nov. 25, 1973, Lynge related.

“How long it took and how many battles we have had the past 40 years,” Lynge said.”Though ICC and especially with the cooperation with the Saami, we have been able to be permanent participants in the eight-state Arctic Council — and at the same time use our opportunities in institutionalizing indigenous rights through the United Nations and other international fora.

“It’s been a tremendous success,” he said.

But Lynge warned that “it can take a very short time to dismantle what we have achieved.”

“How easy it is for the world powers to look away from us who live in one of the harsh conditions in the world for the sake of military and resource interests. It’s happening right now,” he said, likely in reference to the many problems northern indigenous peoples in Russia have faced, such as the temporary dissolution of the Russian Association of Indigenous Peoples of the North in 2012.

Lynge said he hoped that by telling his own short version of the struggle that would serve as “a reminder of how hard it was fought.”

“The solidarity that has been established among indigenous peoples worldwide and the strong bonds among the Arctic peoples will this time not be as easy to dismantle if we work together as we have done up until now,” Lynge concluded.

As for the immediate future of the Indigenous Peoples Secretariat — it’s slated to move to Tromsø, Norway, where the Arctic Council’s administrative headquarters are also based.