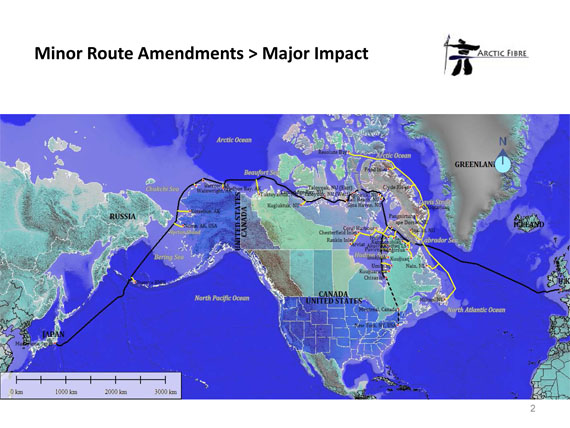 This map shows the amended version of Arctic Fibre’s proposed cable route, with a backbone line running along the eastern coast of Hudson Bay through Chisasibi to Montreal and New York. (IMAGE COURTESY OF ARCTIC FIBRE)

For many Nunavik residents tired of poor long-distance landline phone service, dodgy cell phone connections and slow broadband internet, there’s a potential solution that could be in place by the end of 2014: undersea fibre-optic cable.

Arctic Fibre Inc., the firm that’s planning to install an undersea fibre optic cable to connect London, New York and Tokyo through the waters of the Canadian Arctic, announced Oct. 30 that they’ve amended their plan to include a backbone connection that would extend along the eastern side of Hudson Bay from Cape Dorset to Kuujjuaraapik and Chisasibi.

From there it would run through James Bay Cree territory down to Montreal and New York City, cutting many hundreds of kilometres off the cable system’s link between Tokyo and New York.

That, in turn, would make the network even more attractive to traders working in financial centres like Tokyo and New York, because it would offer nearly instantaneous turn-arounds on large-volume buy and sell orders.

To that end, Arctic Fibre has amended its landing licence application to Industry Canada to enable cable landing sites near Chisasibi and Moosonee to facilitate the shorter route through Montreal to New York.

The company also proposes a series of spur links that could benefit Nunavik, Nunavut and the James Bay Cree.

Nunavik’s need for better telecommunications was underscored this past week in an email sent to Nunatsiaq News by Dr. François Prévost, the head of general medicine at Puvirnituq’s Inuulitsivik health centre and an associate professor at McGill University and the Université du Québec’s Abitibi-Temiscamingue campus.

He said this puts the safety of the population at risk because staff in the region’s 14 health clinics can’t make vital long distance calls.

“It’s as if the telecommunications network in the region was beginning to collapse,” Prévost said.

And he said it’s impossible to even reach Bell’s advertised 611 and 310-BELL numbers to report the problem.

Kuujjuaraapik-Whapmagoostui could be linked to the Eeyou fibre-optic network. An additional spur, at an estimated cost of about $8 million, could be extended to the Nunavut community of Sanikiluaq, the company said.

Other spurs could reach around to the Ungava area, connecting communities such as Kangirsuk, Kangiqsujuaq and Kuujjuaq.

Madeleine Redfern, whose terms as mayor of Iqaluit expired last month, is now, through her consulting firm, working for Arctic Fibre in Nunavut to help the company handle regulatory issues.

“Arctic Fibre intends to meet all its regulatory and land claims agreement requirements for this project, as expressed in the regulations and NLCA with respect to utilities and public easements,” Redfern said.

She pointed out that, if built, the main backbone proposed by Arctic Fibre would instantly connect 52 per cent of Nunavut’s population to fibre-optic through landing spots in communities like Iqaluit, Cape Dorset, Igloolik and Cambridge Bay.

The company proposes that governments spend about $161 million on a system of spur lines to link communities that are not adjacent to the backbone.

Of that, $111 million in spending would pay for the Nunavut-based spur lines.

If Sanikiluaq were connected to the eastern Hudson Bay backbone announced last week, 99 per cent of Nunavut’s population could end up connected to fibre optic.

Only Grise Fiord and Resolute Bay, with a combined population of only 343 people, would be left on the existing satellite network.

“The cable isn’t much wider than a garden hose,” Redfern said.

But at the same time, she said there’s growing “misinformation” about the project and that her job will be to communicate with people in the affected communities and answer any questions they might have.