“If we’re not passing along our knowledge, it’s lost” 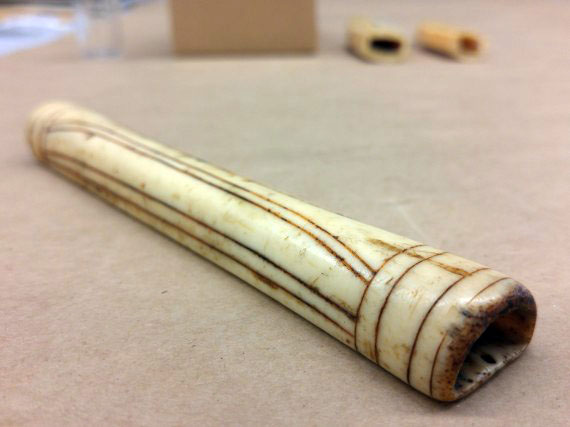 This Inuit needle case is made of bone, and is labelled as coming from the central Arctic. (PHOTO BY KRISTA ULUJUK ZAWADSKI/COLLECTION OF THE MANITOBA MUSEUM, WINNIPEG)

When Krista Ulujuk Zawadski came across a collection of Inuit containers for sewing needles, also called kakpiit, from the 1800s, she wondered why, when growing up in Rankin Inlet, she had never heard of these unassuming little objects that were once vital to Inuit survival.

Zawadski, who is now curator of Inuit art at Nunavut’s Department of Culture and Heritage, told Nunatsiaq News that her interest in anthropology began at Nunavut Sivuniksavut in Ottawa when she was a 17-year-old.

In 2014, as a master’s student at the University of British Columbia, Zawadski took part in the Summer Institute in Museum Anthropology program, known as SIMA, at the Smithsonian Institution in Washington, D.C. To participate in the program, she needed to propose a project based on objects held in the Smithsonian’s massive collection, which includes Inuit art and artifacts.

Zawadski had learned that harpoon heads often have decorative lines on them that look like tattoo lines, so she planned to investigate whether there was a correlation between art on objects, such as harpoons, and traditional tattoo designs.

But she ended up doing a different project, because Candace Greene, the founder of the SIMA program and a researcher in the anthropology department of the National Museum of Natural History, encouraged Zawadski to study the art on kakpiit.

The kakpiit that Zawadski studied in Washington were from Alaska, though similar objects have been found across the Arctic. Kakpiit are typically made of bone or ivory, sometimes with a strap of leather pulled through the hollow centre that the needles were stuck into, so they didn’t fall out.

Sometimes other items in the sewing kit were attached to them, such as thimbles. In areas with abundant wood, kakpiit were little wooden boxes with moss inside to hold the needles.

As she examined the kakpiit, Zawadski wondered how something that she knew had been important to her ancestors could have been forgotten. If fragile bone needles had not been protected from breakage, then “how would we have been able to sew adequately warm clothing to be able to survive and thrive in the extreme cold of Arctic winters?” Zawadski wrote in an article published earlier this month in Museum Anthropology.

Zawadski wondered what other Inuit would have to say about these objects. When she went home to Rankin Inlet, she asked her mother and other people she knew, “What is this thing? How come we don’t have them? How come there aren’t a billion needle cases lying around, like how everyone has ulus and harpoons?”

She took a kakpik—the singular form of kakpiit—with her to show people in Rankin Inlet and other communities in Nunavut. Having the tangible object “prompted some really interesting conversations with people and elders,” though few recognized what the kakpik was.

Bernadette Henrie, who was both a friend of Zawadksi and an elder in Rankin Inlet, initially did not recognize what the kakpik was, until Zawadski referred to it by that name. Once she did so, “the knowledge came flooding back.”

Henrie was able to tell Zawadski about how kakpiit were used during her childhood and the types her father used to make and carry with him when he went hunting. She also recalled how the traditional kakpiit were replaced by metal tins, which are still called kakpiit by some women, including Zawadski’s mother.

Zawadski said this conversation with Henrie, who has since died, underlined the importance of “the knowledge that is buried within our knowledge holders.”

She added, “If we’re not talking about these things and passing along our knowledge, it’s lost.” 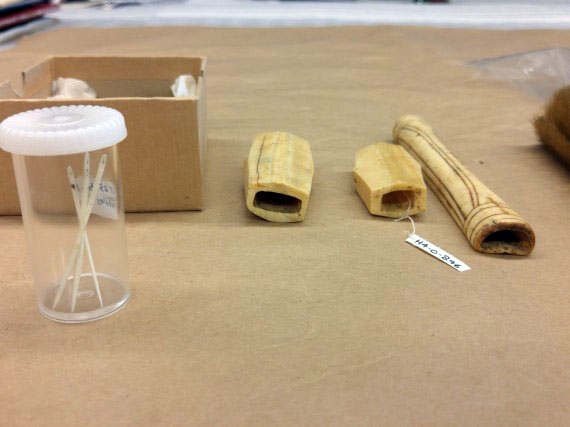 Two Inuit needle cases made of ivory, identified as coming from the central Arctic, beside the bone needle case that appears in the other photograph. The three needles are made of ivory and are likely to have been collected by Dr. Noel and Mrs. Jean A. Rawson between August 1944 and August 1946, while they were living in Chesterfield Inlet because Dr. Rawson was working in the hospital there. (PHOTO BY KRISTA ULUJUK ZAWADSKI/COLLECTION OF THE MANITOBA MUSEUM, WINNIPEG, MB)