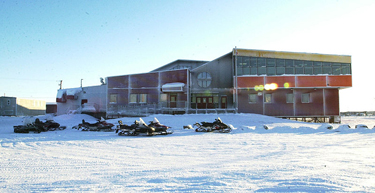 Next week, Gideons International in Canada will hand out Bibles to Arviat students in Grades 5 and up, including students at John Arnalukjuak High School, pictured here. (PHOTO COURTESY OF E. ANOOEE)

Next week, Gideons International in Canada will give away its first Bibles to public schools in Nunavut.

The Canadian wing of the evangelical Christian organization says it was granted permission by the Arviat District Education Authority to distribute Bibles in all three of the community’s schools Nov. 21 and 22.

“Because this is a first time distribution, they have blessed us with the opportunity to hand out scriptures from Grade 5 and all the way up to Grade 12,” said a Nov. 9 news release posted on the organization’s website.

“With Arviat being the first District Education Authority in Nunavut, this will allow us to have discussions in other communities because of this open door.”

When two of the organizations’ distributors visit Arviat, they plan to host membership meetings and do presentations to local churches.

The Gideons also plan to leave copies of the Bible at Arviat’s hotels and at the local health centre and police station.

The bibles are handed out free of charge, although the group relies on financial support through its membership from Christian churches.

The Gideons International In Canada was founded in 1911, building on an international association that began the United States in 1899. The group considers itself a non-denominational missionary arm of the Christian church.

The organization began distributing copies of the Bible in the early 1900s, the work for which they have become most famous.

Since the group formed, the Gideons claim to have given out more than a billion copies of the Bible across the world.

The organization believes that “God’s word can change lives.”

“Is The Gideons engaging in evangelism when it distributes the Bible to Grade 5 students?” reads a question posed in the Frequently Asked Questions page on the Gideons website.

“Yes – and no,” reads the response. “Yes, it is placing the Bible (the Word of God) into the hands of boys and girls with the hope that it will be opened and read so that their lives can be transformed.

“However, giving New Testaments to students is also placing a well known “text book” into their hands — a book that teaches a great deal about morality and about early church history. The New Testament is the most reliable ancient document. Its textual integrity is more certain than that of Plato’s writings or Homer’s Iliad — books that are willingly accepted in school systems.”