Tiny Aupaluk could see a $4.46 billion mine complex 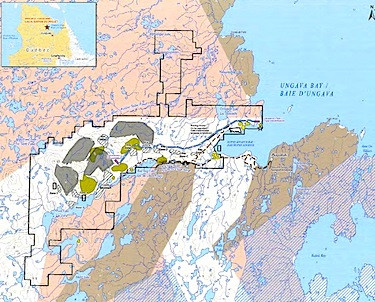 On this map from the project description of the Hopes Advance iron mine project, you can see how large the proposed project is.

The Canadian Environmental Assessment Agency has opened the federal environmental assessment process for the proposed Hopes Advance iron mine project near Aupaluk to public comment.

On Oct. 11, the federal agency invited people to comment on which aspects of the environment may be affected by this huge project and what should be examined during the environmental assessment.

The Vancouver-based Oceanic Iron Ore Corp. owns deposits from the Roberts Lake area north of Kangirsuk to Hopes Advance Bay in the south, which lies only 10 km from Aupaluk, Nunavik’s smallest community.

The $2.85 billion project — into which Oceanic plans to sink in another $1.61 billion in 2025 and 2026 — consists of the construction, operation and decommissioning of several open-pit iron ore mines.

These will generate between 10 million and 20 million tonnes of high-grade iron ore concentrate product every year for up to 48 years.

For the shipment of the iron ore to European and Asian markets, Oceanic also wants to build a deep water port facility on Ungava Bay with a 330-metre loading wharf, a tug moorage area, a commercial wharf and a causeway.

The concentrate would then be pumped to port through a 26 km-long pipeline.

The mine complex will run on diesel power generation until 2025 when the company hopes that “Hydro-Quebec has advanced its transmission line to Ungava bay,” says the project description.

That power would likely flow from the Brisay generating station located on the Caniapscau reservoir south of Kuujjuaq.

Construction could begin as early as 2014 with operations starting in 2016.

Oceanic plans to ship its ore directly from Hopes Advance Bay to China on huge carrier ships during summer and through trans-shipment during winter.

The company is looking at using the fiord near Nuuk, Greenland as trans-shipment location.

Makivvik Corp., Aupaluk’s landholding corporation and Oceanic have already announced that they have agreed to the terms and conditions on which Oceanic would continue to develop its Hopes Advance Bay project near Aupaluk, and “set a basis” for a later impact benefits agreement.

You can review and comment on the draft environmental impact statement guidelines until Nov. 12.

These guidelines identify potential environmental effects in Quebec and outside Quebec, and the kinds of information and analyses that should be included in the EIS.

After this comment period ends, the Canadian Environmental Assessment Agency will finalize and issue the EIS guidelines.

You can send or fax comments to Canadian Environmental Assessment Agency at:

Or you can email them to: