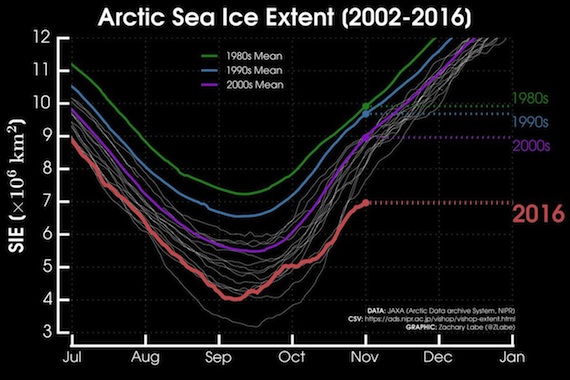 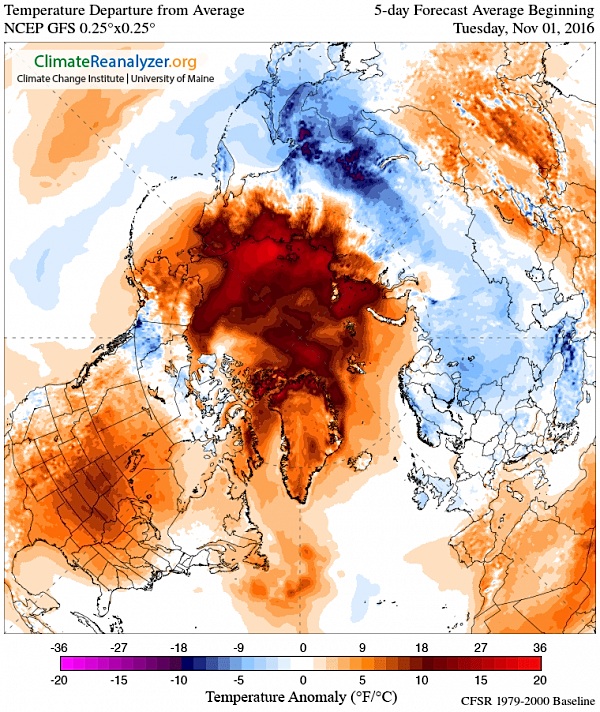 This map from the Climate Change Institute at the University of Maine shows November’s temperature anomaly over the Arctic Ocean, with the deep red colour indicating a 10 C increase over the normal range.

In coastal Nunavut communities, the sea has largely frozen over.

But the Arctic sea ice cover, in other places like Barrow, Alaska, where the water remains open, is looking abnormally small and weak this month—so much so that it’s raised concern among weather watchers around the world.

That’s according to a Nov. 1 Twitter posting from Zack Labe, a graduate science student at the University of California-Irvine and a tracker of Arctic ice conditions, who describes himself on Twitter as a “brazen weather freak.”

Labe notes that for the first time in the Japan Aerospace Exploration Agency, or JAXA, satellite record, which goes back to the 1970s, the Arctic sea ice extent hadn’t reached seven million square kilometres by November.

The lacklustre Arctic ice formation comes after Arctic summer sea ice shrank to its second-lowest in the 37-year satellite record.

“This older ice is becoming weaker because there’s less of it and the remaining old ice is more broken up and thinner, so that bulwark is not as good as it used to be,” he said in a NASA report on Arctic sea ice.

The NASA animation below shows ice growing in the Arctic winter and melting in the summer. It also shows the changes from year to year, showing the age of the sea ice in different colours, with younger sea ice, or first-year ice, in a dark blue, while older ice is shown as white.

The sea ice shrinkage has also accompanied by heat in some parts of the Arctic.

Barrow saw its warmest October ever, with a record-breaking temperature of five C on Oct. 30, the highest temperature ever recorded there so late in the season.

As well, the presence of climate-warming carbon dioxide, reached a new high in the Earth’s atmosphere.

Atmospheric CO2 at the tracking station in Mauna Loa, Hawaii averaged over 401.5 parts per million in October, more than 3 ppm higher than a year ago.

Scientists estimate that the last time that carbon dioxide levels remained as high as 400 ppm was probably between 3.2 million and five million years ago.

Then, the Arctic was as much as 14 C to 22 C warmer than today, trees such as larch, birch, alder and cedar covered the land, and giant beavers and eight-foot-tall camels roamed the High Arctic.