“It’s a huge relief. He didn’t commit suicide. He was shot.” 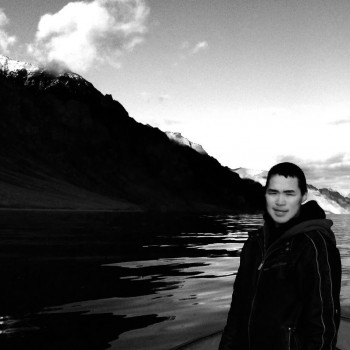 Kunuk Qamaniq, 20, died on March 18, 2017, after an RCMP officer shot him in self defence. (PHOTO COURTESY OF THE QAMANIQ FAMILY) Leah and David Qamaniq say they “feel lighter” now that a coroner’s inquest has ruled that their son’s death, involving the police, was a homicide, and not a suicide. (PHOTO BY BETH BROWN)

POND INLET—Twenty-year-old Kunuk Qamaniq died by homicide in Pond Inlet last year, after the armed man was shot by an RCMP officer, a coroner’s jury ruled, on Friday, Nov. 9, in a verdict that concluded a four-day inquest into the man’s death.

“David Kunuk Qajaakuttuk Qamaniq died as a result of a single gunshot wound through the neck,” the jury foreman said, when reading the verdict in the Baffin hamlet’s community hall at about 8:30 p.m. on Friday after three hours of deliberations. The manner of death, he said, was homicide.

Qamaniq died at the Pond Inlet health centre on March 18, 2017, at about 8:05 p.m., after nurses were unable to stop his heavy bleeding.

The jury’s verdict came after an RCMP lawyer asked that the jury classify the death instead as a suicide, while lawyers representing the family and the coroner urged the jury to call Qamaniq’s death a homicide.

On the day of the shooting, Qamaniq’s parents called the RCMP to say their son was heading towards the graveyard with a rifle, and was distraught over the anniversary of his sister’s death by suicide. Qamaniq had also experienced other losses of friends and family by suicide in recent years.

Three officers responded, though only Cpl. Patrick Higgins was present when he fired on Qamaniq.

Higgins was not charged following the shooting, because an external review by the Ottawa Police Service found that he had fired in self-defence after Qamaniq had quickly raised his rifle at Higgins. Later reports show Qamaniq’s rifle chamber was loaded.

“He had reasonable grounds to believe that shooting Kunuk Qamaniq was necessary for the self-preservation from death or grievous bodily harm,” Sgt. Richard Dugal of the OPS major crimes unit wrote in a report that was entered as evidence at the inquest.

And the lawyer representing the RCMP had suggested that young man’s actions amounted to a death by suicide.

“Pointing the gun at the police officer was in fact an act of suicide,” RCMP lawyer Donna Keats said. She used the term “suicide by cop,” reminding jurors that according to RCMP testimony, Qamaniq had yelled for the officer to kill him.

But the coroner’s lawyer, Caroline Wawzonek, asked jurors not to use the language “suicide by cop” in their verdict, saying this was not a cause of death that could be considered by a coroner’s court.

The five manners of death a coroner’s jury could choose are the following: natural, accidental, suicide, homicide or undetermined. The Qamaniq family cried openly and held each other when the jury foreman confirmed the death as a homicide.

The verdict won’t bring her son back, said Kunuk’s mother Leah Qamaniq, but she added, “I feel a lot lighter.”

Remembering Kunuk, the parents called their third child a generous and kind young man who was close to his siblings. He played sports and loved to be out on the land. The day he died, he had been hoping to go dogsledding with a friend.

In Nunavut, inquests are mandatory for all deaths involving the police. The hearings are fact-finding, and do not lay blame or hold legal sway.

Wawzonek defined suicide as an intentional act where a person is conscious that their actions will result in their own death.

“To be suicidal does not necessarily mean that he committed suicide,” Wawzonek said.

Homicide is defined as an act done by one person to kill another person. The death could still be classified as a homicide, even though Higgins felt he had no choice but to fire on Qamaniq, Wawzonek told jurors.

In his testimony on the third day of the inquest, Higgins apologized to the Qamaniq family, but said he wouldn’t change the decision he made. The officer has been diagnosed with post-traumatic stress disorder. He no longer works in front-line policing.

In their verdict, jurors provided 10 recommendations that aimed at helping prevent similar deaths in future.

The recommendations follow evidence given on the last day of the inquest by the executive director of the Embrace Life Council Kimberly Masson, and by an 85-year-old Pond Inlet elder, Gamailie Kilukishak, who spoke about Inuit knowledge as it relates to mental wellness.

“Over and over again we’ve heard from communities that they know what they need,” Masson said.

As a non-governmental organization, Embrace Life can work with communities to quickly fund and support grassroots community-wellness programming, Masson said.

Kilukishak asked that elders be called on to work with community members following low-level crimes that do not involve weapons. Elders should be given a space to work alongside law enforcement and mental health professionals, he said.

“This is requested constantly,” he said, adding that community members who are going through a difficult time would benefit from choosing the person they want to confide in.

“When they choose the person, they are more liable to listen,” he said.

In an RCMP testimony, Pond Inlet detachment commander Cpl. Terry Hamelin said residents who come through the detachment “all tell me the same thing,” that is, that it’s hard to open up about their mental health to a different health care professional at almost every appointment.

The 10 recommendations of the jury are the following:

• That a suicide prevention plan be created in Pond Inlet by the hamlet, elders and youth, through support from the Government of Nunavut’s mental health division and Quality of Life Secretariat, as well as the Embrace life Council.

• That an Inuit counselling program be created in Pond Inlet through training from the Government of Nunavut’s Department of Health and NGOs.

• That crisis intervention workshops be held in Pond Inlet using funding that the Embrace Life Council will work with elders and youth to request.

• That front-line workers in the community take community awareness training to be created to include Inuit history and the findings of the Qikiqtani Truth Commission and the Truth and Reconciliation Commission.

• That sharing protocols be developed between community services such as schools, health centres and law enforcement, so that high-risk individuals are identified for early intervention support.

• That the GN and the RCMP increase Inuit employment and retention in law enforcement roles through an Inuit recruitment plan.

• That the Hamlet of Pond Inlet establishes a mental health steering committee.

• That family members be allowed in trauma rooms at health centres when their loved ones have experienced a serious injury. 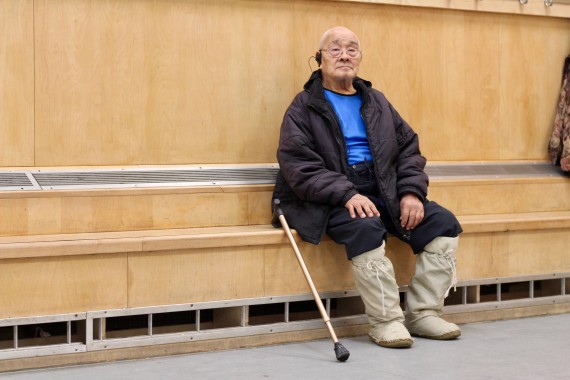 Gamailie Kilukishak, 85, wants law enforcement and mental health workers to speak with elders about community members who are at risk. (PHOTO BY BETH BROWN)