Company apologizes: “We are deeply sorry and we will do better” 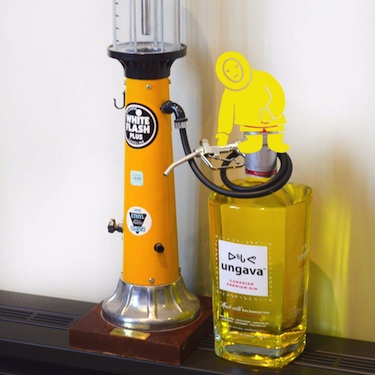 This image of an Inuk promoting Ungava gin shows a “non-Inuit owned Toronto-based company mocking us and profiting off of us,” said Nunavut performer Tanya Tagaq in a tweet. 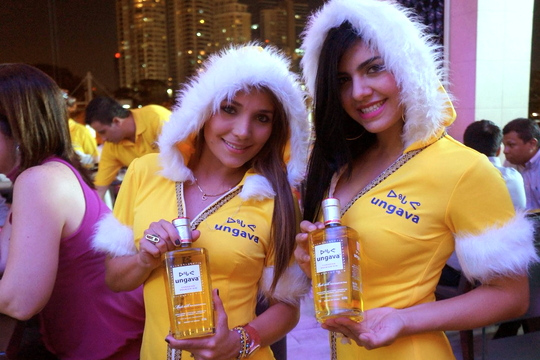 This is how Ungava likes to promote its gin, with faux-furred “Inuit” ladies. 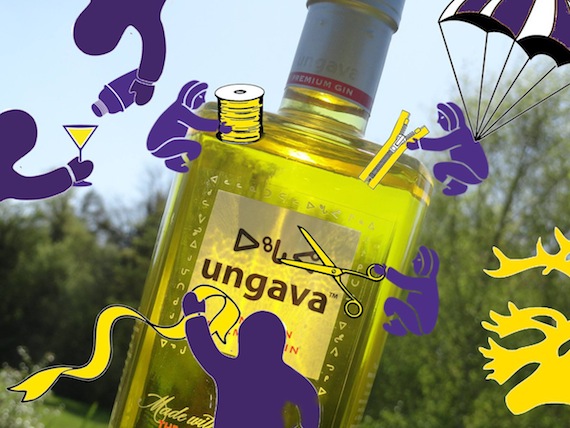 Inuit as elves in an Ungava gin marketing image? “In this one @Ungava_Gin thinks we’re like Santa’s elves, it’s fun being mythical creatures and not real human beings,” tweeted Nunatsiavut Ossie Michelin Sept. 13.

An Iqaluit man said Ungava-brand gin is one of the best gins around, but this week he slammed its marketing campaign for misusing Inuit—to sell gin.

The Quebec-made Ungava gin, recently sold by Domaine Pinnacle to Corby Spirit and Wine Ltd. for $12 million, has received many quality awards over the years for its unique flavour, which comes from Nunavik-picked Labrador tea, crowberry, wild rose hips, Nordic juniper and cloudberries.

On Twitter Michelin even came up with an original hashtag, demanding #MakeUngavaInukAgain.

“You missed a real opportunity to call them Ginuit. Not only is your marketing racist but it is lazy,” Michelin said Sept. 13 in a tweet.

Here’s some of the images Ungava critics have referred to:

• a bottle with little Inuit figures, with scissors, thread and ribbons, wrapping up an Ungava bottle for Christmas: “In this one @Ungava_Gin thinks we’re like Santa’s elves, it’s fun being mythical creatures and not real human beings,” Michelin said;

• non-Inuit women dressed in yellow parkas with deep necklines to promote Ungava: “Have you met the Ungava Gin Inuits,” reads the ad. Tagaq accused Ungava of sexualizing Inuit to sell alcohol: “Classy.” She also found another shot showing Asian women wearing the same Ungava-brand parkas: “What does @Ungava_Gin do when there are no Inuit to model their ridiculous costumes? Hire Asian ladies;”

• a measuring scale showing an Inuk with an empty bowl on one side and on the other a bottle of Ungava, which prompted Michelin to ask “how much booze is an Inuk worth?”

• an Inuk with a gas nozzle perched on top of an Ungava bottle. “Non-Inuit owned Toronto-based company mocking us and profiting off of us,” Tagaq said;

• an “Inuit survival guide” with a bottle of Ungava gin in a parka-like outfit, half-unzipped, against a background of Arctic scenery, which had Franco Buscemi of Iqaluit to tweet — “Here’s a tip from the #InuitSurvivalGuide Don’t use Inuit as mascots to sell your product;”

• a photo montage asking if Nunavik’s Pingualuit crater is a lake, a species of penguin or a native community (Inuit): and,

• bad syllabics—while Ungava is translated correctly on the bottle, the syllabics embossed around the bottle are merely decorative.

This past February Nunatsiaq News contacted Charles Crawford, the president of Domaine Pinnacle, which developed Ungava gin, about an image circulating on Twitter that showed northern lights and a church, and suggested “whether with olives or lemon, Ungava gin cocktails will take you to heaven.”

We asked him if he planned to remove the image, saying it was “inappropriate from a northern/Indigenous standpoint.”

“This was something developed and posted by our distributor that we were not informed of and I agree it is not appropriate so we will take it down ASAP,” he responded.

But in March the same image was up on Ungava’s Twitter feed again.

But now, Crawford has issued an abject apology, posted on the company website late in the afternoon of Sept. 14.

“We recognize that the campaign crossed an important line and has offended many people. For that, we are deeply sorry and we will do better,” Crawford said.

In the statement of the apology, Crawford said the company will engage “key cultural influencers to gather explicit feedback on our use of Inuit symbology” and that “we are committed to being more culturally aware and sensitive in our advertising efforts going forward.”

And he said that because the Ungava brand of gin uses six botanicals found in Nunavik, their original intention was to honour Nunavik.

“The decision to call our gin Ungava was always intended to pay tribute to the land from which the gin is produced, and to celebrate the unmistakable beauty of the Ungava region,” he said.

He said the offending materials are from a marketing campaign done in 2013, and that they will scour all their media channels, including Facebook, Twitter and their own website to remove them.

“We are truly sorry that we’ve offended the Inuit community, as this was never our intent, nor does it align with our corporate values and beliefs,” he said.

Thanks for your patience. Our statement on using Inuit culture an imagery in promotional campaigns… https://t.co/8NI50dYcCG

In interviews with Nunatsiaq News in August 2013 — in a story which generated no controversy at the time, Crawford said he realized alcohol is a touchy issue in the North. He said the company made an effort to ensure Ungava’s marketing materials promoted the region.

Many of the texts on the Ungava website in 2013 could have been lifted out of tourist brochures—Ungava gin “reminds us of the ethereal brushstrokes of the northern lights that dance across the northern skies.”

Ungava is not the first alcohol beverage to be named for a place in Canada’s North, Nunavut, the beer, was distributed 10 years ago by Ringnes, a top Norwegian brewery, because their founders had supported several Arctic expeditions at the beginning of the last century.

And Ungava isn’t even the first to use Inuit stylized figures in promotional materials—just take a look at Inuit Tapiriit Kanatami’s Inuit men and women displayed on its logo.

But Ungava gin critics cite cultural appropriation among its worst marketing offences, including, as Tagaq put it, “bastardizing syllabics.”

This isn’t the first mis-branding of a product that has enraged Inuit.

Alaskan Air unveiled its new look earlier this year, which a redesign of its well-known tail art, the image of a hooded Inupiaq who’s long been referred to as the Eskimo, with the slogan “Meet Our Eskimo.”

This airline later backtracked on its new slogan, issuing an apology to its clients and removing the “our” so it read “Meet The Eskimo.”

And in December 2015, Natan Obed, the president of ITK, asked the Edmonton Eskimos football team to stop using the term Eskimo, a Cree word that means “eaters of raw meat.”

“This issue is about our right to self-determine who we are on our own terms,” Obed said. “We are not mascots or emblems.”

Near this igloo shown on an Ungava gin marketing image, there’s a huge bottle of gin.