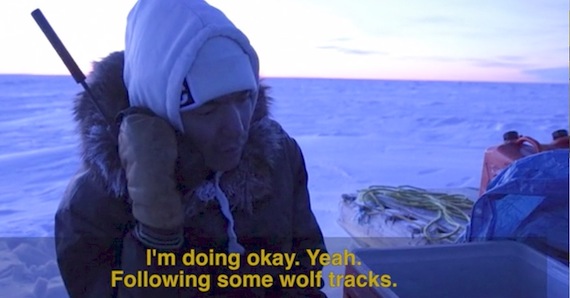 A young hunter calls home with his sat phone to say everything’s ok — but not for long in the short horror film “Uiri” by John Man of Arviat. 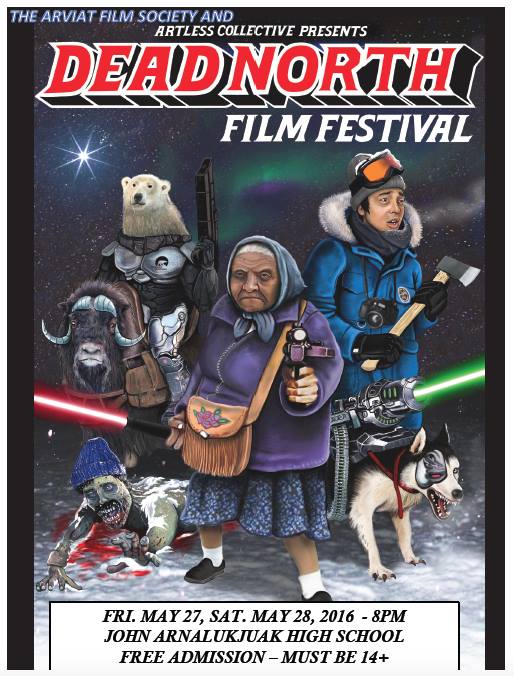 This poster advertises the two-night Dead North film festival — Arviat’s first film festival ever — held May 27 and May 28 in Arviat.

Be prepared to be scared out of your wits in a little more than eight minutes.

That’s what watching the recently-produced horror short, “Uiri,” by John Main — shown with other films at Arviat’s Dead North Film Festival, May 27 and May 28 — can do to you.

Take a day when it’s minus 57 C and a young man heads off an a snowmobile to hunt, and you don’t know more than he does about what will happen after his snowmobile breaks down and a mean caribou-parka-clad tuungaq, or demon, turns up — especially when uiri, or addiction to weed and thrills, comes into play.

You get the picture, and it’s unsettling enough to keep you watching.

The film, whipped together by Main this past February on a $450 budget and shot with a Canon SLR camera, recently won a “Zombear” award at the Dead North film festival in Yellowknife for its music by a company called incompetech.com.

That Dead North award, a metallic grey bear with wings and huge claws, now on display at Main’s Arviat home, is now terrifying his other soapstone carvings.

The biggest challenge in the entire “Uiri” project was finding enough bandwidth to send the one gigabyte film to Yellowknife in time to enter the contest, he said.

The next biggest challenge for the film was the weather, which shows up in the pink and blue hues of the icy, flat landscape in the film.

“It was very cold. We picked one of the coldest days to go out and shoot it,” Main said.

The main actor, Shelton Nipisak, kept getting frostbite, along with Andy Evaluardjuk, who held the sound boom in place.

The batteries also froze repeatedly and ended up in the caribou parka of the tuurngaq, Hallauk Karetak, for safe-keeping. Every 15 minutes they’d take out the warmed batteries and replace them with cold ones.

“I was a long day for eight minutes of film,” Main said.

“Uiri” was Main’s response to a challenge from the Dead North festival, the brain child of Yellowknife’s film studio, Artless Collective.

The festival first-time and veteran filmmakers from North of 60 had to come up with their best original horror, science fiction or fantasy films for the festival’s fourth annual filmmaking challenge.

Teams were tasked with making the short films over nine weeks “in the dead and dark of winter,” with submissions later screened at the Capitol Theatre in Yellowknife, Feb. 26 to Feb. 28.

Main said he received lots of help from the Arviat Film Society which helped bankroll the production — and provided nearly all the cast.

Making the film cost little, because everyone used their own snowmobiles, for example, to get around and the principal location for all the action was an old cabin outside town.

Not to give away the scares — Main said one of the creepiest things in the production was that the snowmobile which causes the hunter problems in the film also stopped working for the crew on the way home and they had to abandon it.

The film features English and Inuktitut dialogue with subtitles in English for the Inuktitut parts.

The dialogue includes several expletives like “fucking skidoo” and “what the fuck” along with Inuktitut words — but the combination of the two languages was intentional, said Main, who speaks both languages fluently.

“I like having the mix of Inuktitut and English because that’s the way people talk,” he said.

But Main said he understands why some want to produce films in Inuktitut only.

“This is great, but it doesn’t make it an accurate representation of how people live,” he said.

“Uiri” and other films screened at the Dead North festival in Arviat to an appreciative crowd who decided to forgo goose-hunting and fishing in favour of horror films, which Main says are a popular genre in his home-town community of 2,800.

The film festival is the first to take place in the growing community, where people usually watch movies at home, Main said.

And you can decide for yourself how scary “Uiri” is here:

UIRI from Dead North on Vimeo.

You can also look at the Dead North Festival’s Facebook page.