Dozens to get firefighter training in Nunavik this year 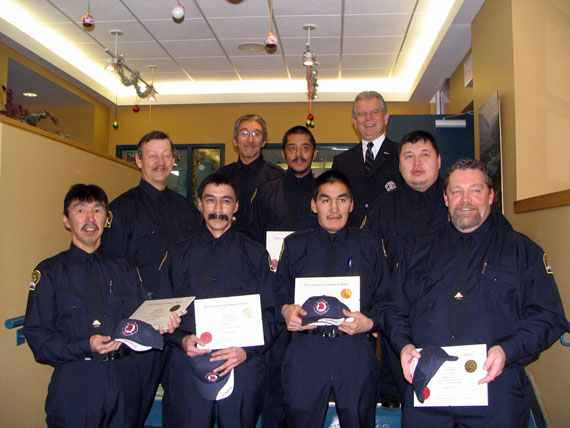 Nunavik’s first-ever firefighter graduates are pictured here in November 2008, after receiving their Fire Fighter 1 accreditation from Quebec’s ENPQ. The same group went on to become certified as Fire Fighter 1 instructors in 2010, which allows them to train other firefighters in the region. (PHOTO COURTESY OF THE KRG)

INUKJUAK — Nunavik’s public security department expects to see another 45 firefighters go through training this year to earn their Firefighter Level 1 — an internationally-recognized certification.

That also pushes the region’s Fire Safety Cover Plan one step closer to its goal of certifying 10 firefighters per community, one part of bringing fire protection services for the region up to Quebec standards.

The firefighter training program has attracted dozens of long-time volunteer firefighters from Nunavik communities, including a growing number of Nunavimmiut women.

But the program, which involves a training portion in Blainville, Quebec, also took a hit this past spring when seven out of 14 registered trainees didn’t show up for their flight south.

“Firefighters have a big responsibility and we have to encourage them at the community level,” said KRG chair Maggie Emudluk. “They don’t get a lot of pay, but it’s important we have them for fire safety issues.”

Nunavik firefighters fought 66 fires in 2014, according to statistics compiled by the KRG.

That was fewer fires than were recorded the previous year — 74 in 2013 — but the damages caused by the fires skyrocketed to over $17 million.

“It’s pretty obvious we’ve got an enormous increase,” said Lingard, “and that has a lot to do with the Aupaluk fire.”

On March 15, 2014, a fire broke out at Aupaluk’s Tarsakallak School, completely destroying the only school in the tiny community of about 195 people.

The cost to rebuild the school has been estimated at about $16 million, accounting for almost 60 per cent of all material losses due to fire in Nunavik over the last five years.

Unlike the Aupaluk school fire, the majority of fires recorded in the region happened in residents’ homes, Lingard said.

“And most of our fires would be avoidable if people were aware of ignitable sources,” Lingard said. “This awareness is something we’ll be focusing on.”

About one in five fires recorded in Nunavik is considered suspicious, he added.