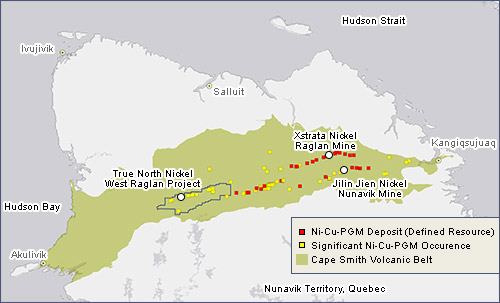 This map shows the proximity of the West Raglan property to Nunavik’s two other producing nickel mines. (IMAGE COURTESY OF RNC)

Located roughly 90 kilometres southwest of Salluit and east of Akulivik, the West Raglan property is owned by True North Nickel, while the Toronto-based Royal Nickel Corporation owns 56 per cent of its shares.

A new technical report shows a potential deposit of between five and 20 million tons of ore on the property, containing nickel graded at between one and three per cent, which is considered high.

The geologists who prepared the report recommend the Royal Nickel Corp. further explore the site, including aerial electromagnetic surveys and thousands of metres of additional drilling.

“West Raglan has yielded multiple shallow, high grade nickel and platinum group metal intersections in an excellent mining jurisdiction and is one of only a few high grade sulphide nickel and PGM exploration targets in close proximity to existing mining operations,” said Mark Selby, president and chief executive officer of Royal Nickel in a July 29 release.

Selby is referring to Nunavik’s two other producing mines: Glencore’s Raglan Mine, roughly 200 kilometres to the east, and Jilin Jien’s Nunavik Nickel mine.

The West Raglan property was originally staked in 2002 by British mining company Anglo American until True North Nickel acquired full ownership of the property in 2012.

The property is already home to a 256-metre long airstrip constructed at its campsite to accommodate Air Inuit’s Twin Otters, which connect the camp to Puvirnituq.

The site is also connected to Salluit by an ice trail which allows fuel and equipment to be brought in by snowmobile during the winter months.

True North Nickel sunk about $6 million into exploring the 400-square-km West site in 2012 and 2013. Royal Nickel purchased 56 per cent shares of True North earlier this year.

The mineral resource company oversees the Dumont Nickel project in Amos, Quebec; it also has a 25 per cent stake in the Aer-Kidd nickel-copper-platinum project based in Sudbury, Ontario.