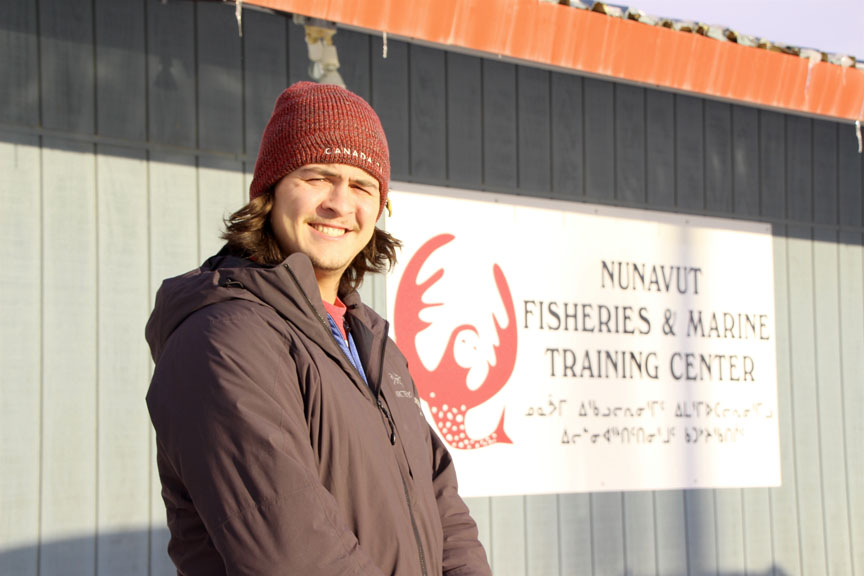 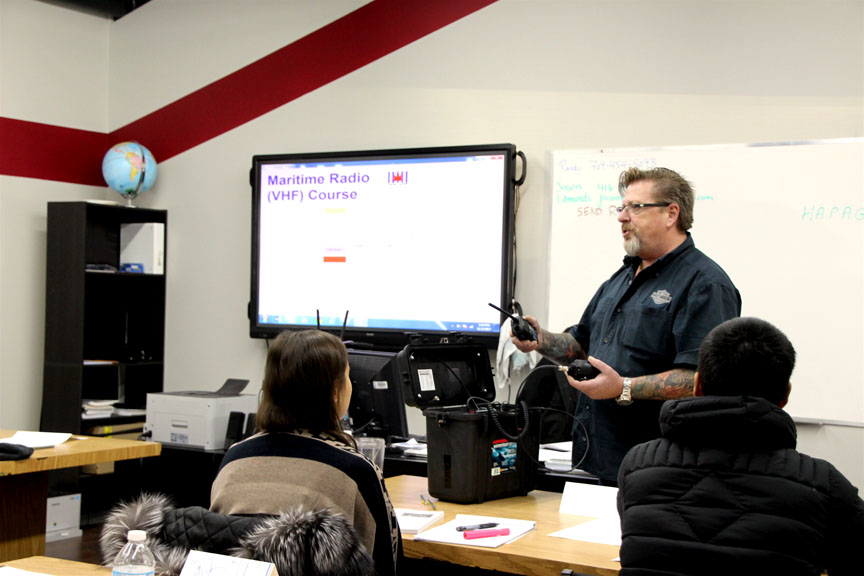 Randy Pittman of the Nunavut Fisheries and Marine Training Consortium teaches students at a Nunavut cruise ship training boot camp on how to operate a VHF marine radio during classroom time in Iqaluit last week. (PHOTO BY BETH BROWN)

Iqaluit’s Robert Comeau, 23, worked as a cultural interpreter this summer on an expedition cruise ship sailing the Northwest Passage.

The work was fulfilling, and travelling to historic sites within Inuit Nunangat was amazing, he said, but the experience left him wanting more.

Now, after completing a Nunavut cruise ship training boot camp that wrapped up in Iqaluit this past weekend, he can do that.

The two-week course is a pilot project organized by the Government of Nunavut’s Department of Economic Development, Parks Canada and the Nunavut Fisheries and Marine Training Consortium. The course finished Nov. 4.

The course basically sets students up to drive zodiacs, help with shore landings for community visits and act as bear monitors for off-ship hiking excursions and visits to heritage sites.

“All of our training is done to industry standard. It’s all governed by Transport Canada,” said instructor Randy Pittman of the Nunavut Fisheries and Marine Training Consortium.

“The certificates that they get are either to national or international standards.”

Pittman said about 40 to 60 jobs are currently available for young Nunavummiut in the adventure tourism industry.

That’s why the training school and the GN are planning to expand the intensive program.

The coursework was all done in class this time around, but “in the expansion we’d like to be able to do more practical (training,)” Pittman said.

The school is planning to get some zodiacs in time for summer training, as well as a fast rescue boat simulator for year-round small vessel operation training.

That shouldn’t be too hard as long as funding holds out. While the training program is a first-time pilot project, there are now 50 people on a waiting list for the next course, Nunavut’s Economic Development Department said in an information bulletin provided to Nunatsiaq News.

“When travelling through Inuit Nunangat, people come for the polar bears and the icebergs, but for the most part they remember the people when they leave,” Comeau said, adding that besides developing his own skills, he’s excited to see an investment being made in Nunavut youth.

“It’s a positive thing for me because it means there will be more Inuit involved in the industry.”

And, since the same ships that traverse the Northwest Passage often do tours in Norway and even to Antarctica, students who get a job with a cruise operator could do a lot more travelling to remote polar places.

“It makes a better product when you have someone who can tell you ‘my grandfather was born at this place.’ But, the qualifications needed to work on these voyages are burdensome, cumbersome and super expensive to get.”

Both projects fall under the Nunavut Marine Tourism Management Plan, created in 2016, after the territorial government realized it needed to make a plan to control, contribute and create capacity where it could towards an industry that was going to keep growing regardless, Orawiec said.

That year the Crystal Serenity set records as the biggest cruise ship to traverse the Northwest Passage.

“The Crystal Serenity raised that consciousness of, ‘Are we actually ready for his kind of thing?’” he said.

Capacity building in communities has been a focus for Parks Canada too, said Munju Ravindra, who manages cruise and marine tourism for national parks and historic sites in Nunavut for the federal organization.

“We want to help foster economic development in the communities,” especially for communities that are near national parks or historic sites, such as the Franklin site near Gjoa Haven, she said.

To do this, Parks Canada developed an on-board internship program with the cruise operator Adventure Canada, where young Nunavummiut learn about hospitality, group leadership and safety, while they take part in an expedition.

A handful of students who completed the cruise training boot camp have already done one of those internships.

Parks Canada and the GN are hoping more cruise operators will create similar internships that will act as feeder programs for future cruise training courses.

The GN and the Canadian Northern Economic Development Agency paid for the training.

The program coordinators are also working with the Association for Expedition Cruise Operators, the cruise operator Adventure Canada, Parks Canada, and Students on Ice.