“We’re trying to get that message across, to stay in school” 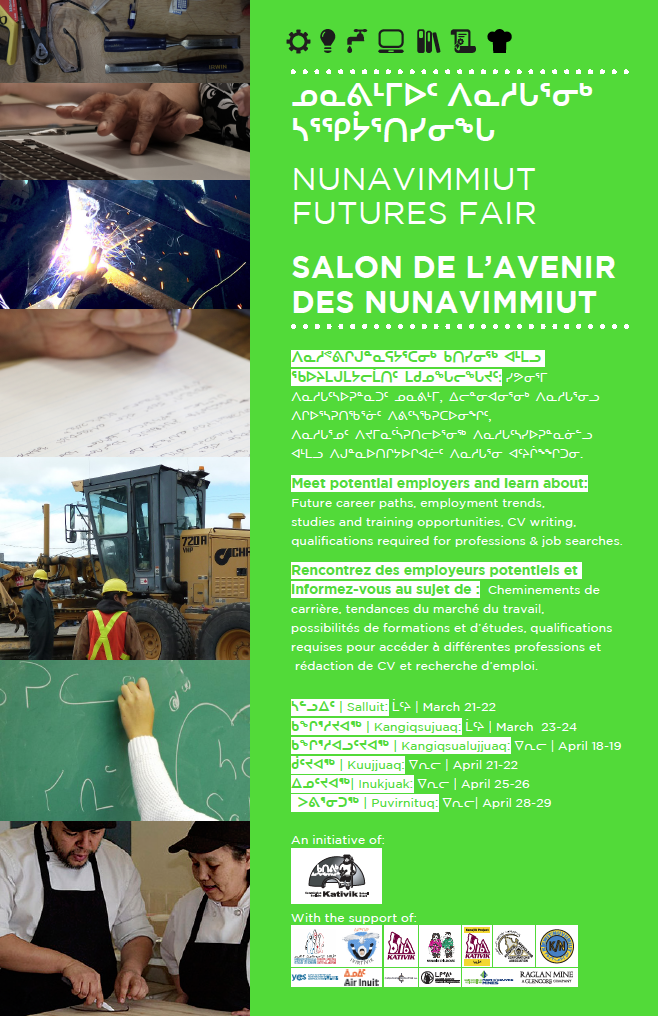 The Kativik School Board’s Futures Fairs will visit six Nunavik communities between now and the end of April.

Need some help mapping out your future?

The Kativik School Board plans to host its first series of education and training fairs in six Nunavik communities this month and next.

“It became evident in different meetings with organizations and other partners in the region that there was a need and interest to inform secondary students and adults about what employment opportunities there are, and what they need educationally to obtain these jobs,” Mesher said.

The KSB operates adult education in five Nunavik communities, the largest of them in Inukjuak, with programming in the traditional trades, like plumbing and carpentry to computer support and desktop publishing, to Inuktitut translation and interpretation, and even professional cooking.

But the KSB’s fairs help Nunavimmiut learn what options they have, Mesher said.

Rather than a traditional fair setting, where participants visit booths, the KSB has set up interactive workshops in classrooms in Salluit, where the first installment of the fair runs March 21 to March 22.

The classrooms host representatives from the region’s major employers, including Makivik Corp., the Kativik Regional Government, the Nunavik Regional Board of Health and Social Services and Glencore, which operates the Raglan mine.

High school students visit the classes during the daytime, while adults can take part in the evening.

From Salluit, the fair moves to Kangiqsujuaq March 23-24, and then takes a break before visiting Kangiqsualujjuaq, Kuujjuaq, Inukjuak and Puvirnituq in mid-April (see fair dates below.)

“We hope that the momentum picks up and we have even more organizations join us,” Mesher said.

Mesher said there seems to be a misconception in the region that students can drop out of high school and then come back and enrol directly in a trades program.

“But we have pre-requisites as well,” she said. “And a student who graduates from high school has a better chance of succeeding in vocational training — you need your math and you need your language. We’re trying to get that message across, to stay in school.”

The KSB’s Future Fairs will be held in: