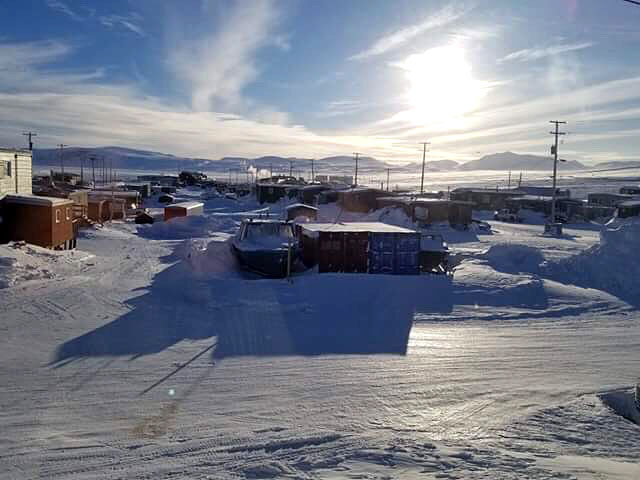 To better understand the impact of Nunavut’s housing shortage, the Government of Nunavut’s Family Services department has begun to survey the territory’s hidden homeless population: people who need their own homes, but who are crammed in with others. (FILE PHOTO)

Not everyone in Nunavut sleeps in the same place every night—and not by choice.

The Government of Nunavut has been surveying “hidden homelessness” in four Nunavut communities—Clyde River, Gjoa Haven, Arviat and Pond Inlet—to figure out how many people or families do not have safe, permanent places to sleep each night.

The survey in Pond Inlet, now completed, reached 95 homes, though results won’t become public until the research is finished and the Department of Family Services releases a report.

“We do know that there is hidden homelessness. It’s there, so we are measuring that,” said Deatra Walsh, director of the GN’s poverty reduction division.

“We’ve been very well received as a survey team. People want to talk about this issue,” Walsh said.

Survey homes were randomly selected from public housing units, staff units and privately owned units, to make sure that survey results are representative of the entire community.

The data should also show which homes are hosts to hidden homelessness, Walsh said.

Interviews to gather data are done by a pair of surveyors, including one staff member from Family Services and one surveyor hired from the community who acts as an interpreter and a liaison person.

“We ask them, did you sleep in this house last night? Do you live here? Are you a couch surfer, or do you sleep here temporarily?” Walsh said.

The Nunavut government last surveyed a similar kind of homelessness in 2010, through the Nunavut Housing Corp., where about 1,220 people in the territory were found to live with temporary sleeping arrangements.

But during the recent sitting of the Nunavut legislature, the minister responsible for homelessness at that time, Joe Savikataaq, said knowing the numbers isn’t so simple, when Netsilik MLA Emiliano Qirngnuq asked March 13 about how many homeless people there are in Nunavut.

“I cannot respond to it because it’s different. Some homeless live in shacks. We hear in Iqaluit that they sleep in old boats, and some homeless sleep in from home to home or live with friends,” Savikataaq said.

“I can’t tell you the exact number, but once our survey is done, we will have an idea.”

(Iqaluit-Sinaa MLA Elisapee Sheutiapik is now the minister responsible for homelessness, following a cabinet shuffle this past March 22, when she exchanged portfolios with Savikataaq.)

Savikataaq also said in the House that the Family Services department will have to wait until the current survey is done before doing similar work in other communities.

“These surveys will help us identify what kinds of housing solutions and supports are needed to prevent homelessness and assist Nunavummiut move towards a safer, more stable and self-reliant way of life,” Savikataaq said.

On March 12 Savikataaq told Gjoa Haven MLA Tony Akoak that the survey results would be used to develop an action plan within the department to address homelessness in the territory.

“Getting a handle on the hidden homeless, this will be the first step to see how much of a problem it really is in terms of the size of the problem,” Savikataaq said.

During the surveys, researchers are also asking questions about food security. After the survey, each participant is given a $25 gift card for the grocer of their choice.

But Walsh said the surveys are not focusing in on other Nunavut issues related to homelessness, such as overcrowding and lack of housing.

“I don’t equate hidden homelessness to overcrowding, I don’t think that’s fair. What we need to do is talk to people in their households and understand what the situation is in that household and where and how people are sleeping and get a sense of the reasons behind that.”

The surveys are funded through a federal Homelessness Partnering Strategy that is looking to gather this kind of information nationally.

Dates for the last two surveys are April 23 to May 4 in Arviat and May 7 to May 10 in Gjoa Haven.