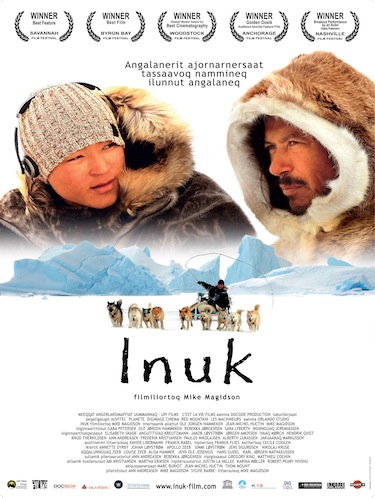 This poster advertises the film “Inuk,” submitted for a Best Foreign Picture nomination from the American Academy of Motion Picture Arts and Sciences, which recognizes excellence of professionals in the film industry with its annual Oscar awards.

Greenland has nominated a locally-made film for the Best Foreign Language Film category at the American Academy of Motion Picture Arts and Sciences, the Oscar committee of Greenland announced Oct. 1.

This year’s Greenlandic nominee for one of five finalists positions in the Best Foreign Language Film category: the film Inuk, directed by Mike Magidson and co-written by Magidson, Ole Jørgen Hammeken and anthropologist Jean Michel Huctin.

Inuk tells the story of 16-year-old Inuk, sent from his troubled home in the capital of Nuuk to a children’s home in Uummannaq in northern Greenland.

There, he meets Ikuma, a legendary polar bear hunter, who sees his skills mysteriously disappearing. Taking Inuk on his dogsled for the annual hunting trip, they confront fragile sea-ice.

But the most difficult part of the journey turns out to be “the one they must make within themselves,” an Oct. 1 news release said.

Shot on the sea ice in -30 C, Inuk features the performances of teenagers from the Uummannaq Children’s Home and local hunters, all playing roles “close to their real lives.”

“Created as an original road-movie on the sea ice, Inuk is both an authentic story of Greenland today and a universal story about the quest for identity, transmission and rebirth after the deepest of wounds,” said Jean-Michel Huctin, Inuk’s co-writer and co-producer.

In Greenland, Inuk sold more tickets than films like Men in Black III, The Avengers, The Dark Knight Rises and The Hunger Games.

“Inuk is one of the most beautiful movies ever to come out of Greenland. The Greenlandic audiences gave long standing ovations after every showing when it was released in the Katuaq Cinema in the Greenlandic capital, Nuuk,” said Katuaq theatre manager Bill Bering.

Inuk is set for general release in Germany, Switzerland, Austria, and South Korea in early 2013.

Negotiations are now underway so movie-goers in Canada, Australia, and the U.S. can also see Inuk.

Mimi Karlsen, Greenland’s minister of culture, said she’s happy that “a film made in Greenland has received so much attention in the big world. “

“All good filmmaking begins with a good story that is interesting and engaging for the audience. Inuk is just such a story. The film’s main characters manage to show us the spiritual side of Inuit traditions and how to pass these on to future generations. It is shown in a beautiful way,” Karlsen said.

You can learn more about Inuk here.