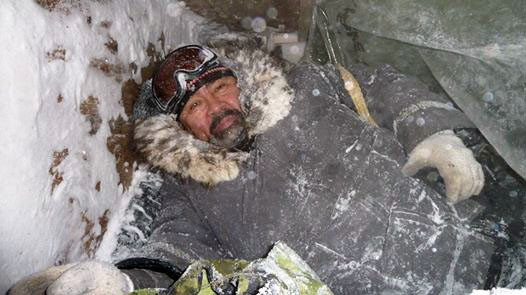 Johnny Oovaut, pictured here in a cellphone snapshot taken by his son Alec, thought he would die in a snowstorm in November 2013. (FILE PHOTO) 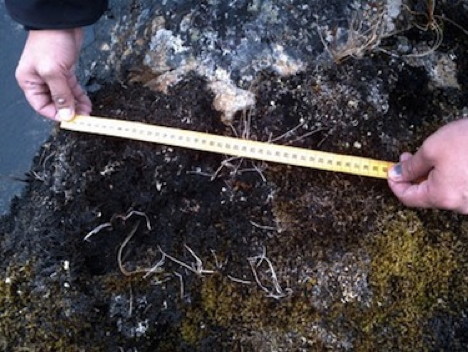 This photo that Maggie Cruikshank posted on Facebook shows what she believes to be the footprint of the creature she saw near Akulivik in September 2012. (FILE PHOTO) 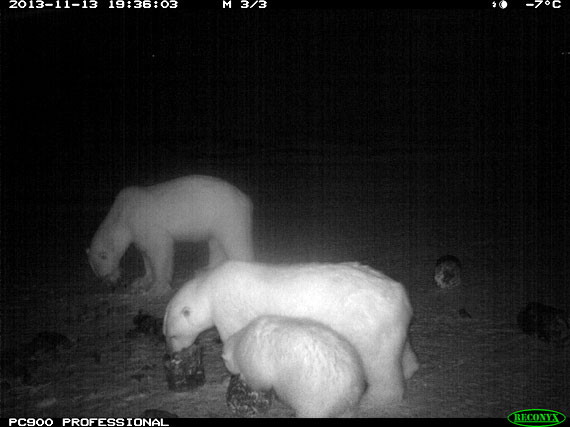 Bears in Arviat, captured on hidden camera, feast on frozen seal meat on the outskirts of town. (FILE PHOTO) 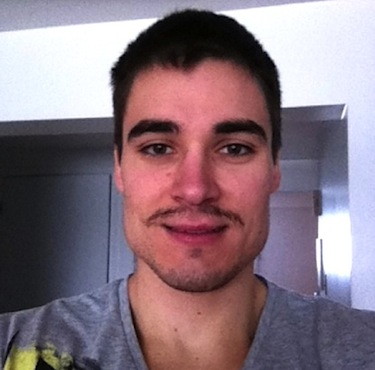 It’s that time of year again when Nunatsiaq News looks back on the year that was to find out what most enticed our online readers, and where those readers came from.

We can do this thanks to Google Analytics, which serves up a rich variety of web page statistics.

Last year’s top web story was a sad one — the shooting death on March 2 of Cst. Steve Déry, a Kativik Regional Police Force officer in Kuujjuaq.

Déry and his partner, Cst. Joshua Boreland, responded to a domestic violence call. Shots were fired from inside the house, killing Déry and wounding Boreland. A lengthy stand-off ended when members of the Sûreté du Québec entered the house and found the body of Jobie Saunders Jr., who died by an apparent suicide.

The second most read story on our website was a bit of a surprise: “Do feed the bears, polar researchers suggest” received the second highest number of pageviews — 14,625 as of Dec. 30.

That story, which ran in February, described the possibility, put forth by Andrew Derocher of the University of Alberta and other polar bear researchers, that polar bears might one day need to be fed “commercially-formulated bear chow.”

As Arctic waters become increasingly ice free, the scientists suggested polar bears won’t be able to hunt seals, so we may need to implement a “radical” solution of feeding the bears to keep them alive.

It might not be so radical after all: bear monitors are already doing it in Arviat.

To entice migrating bears away from the community, conservation officers have been leaving pails of frozen seal meat on the town’s edge to keep them busy, and away from community members.

Stories number three and five were also crime related: the death of a man and the injury of a police officer in Akulivik this past August, and an apparent murder-suicide in Kimmirut in March.

In Akulivik, a man opened fire on KRPF members when they responded to a call at a local residence. The KRPF returned fire and a man was killed during the exchange. Another man, inside the residence, was injured.

That incident, coupled with the death of Cst. Déry, lead to a mass exodus of KRPF officers in June, when more than 30 members resigned.

The Kimmirut story likely involved two homicides and one suicide: the deaths of a man, a woman, and their son, who had not yet reached the age of two.

Freelance contributor and frequent bigfoot chronicler Justin Nobel wrote a story in October about Akulivik hunter Harry Cruikshank’s run-in with a rock-throwing creature during a hunting trip to a remote bay on the Hudson Bay coast, south of Akulivik.

“We heard a strange noise up in the land,” Cruikshank said in an interview, “like the sound of something throwing rocks.”

“Maybe the creature was trying to communicate with us,” added Cruikshank. “But I don’t know how to talk to the bigfoot.”

The other five stories that filled out our top 10 list for 2013 included three harrowing tales on the land.

The first was the unsuccessful search for two American tourists who went missing July 29 on Dubawnt Lake, southwest of Baker Lake.

Earl Zellen, a retired Ford executive, and his son Matt Zellen, both of Detroit, Michigan, were guests of the Tukto Lodge when they went fishing on the lake.

Their boat was found on the shoreline full of communication equipment and survival gear. The two men, whose bodies were never found, were presumed dead.

Another popular search and rescue story, but with a much happier outcome, was the rescue of Johnny Oovaut and his son Alec after they went missing in a snowstorm this past November.

The two men left Quaqtaq, Nunavik, on Nov. 15 heading towards Tasiqjuakuluk but exposed rocks on the land eventually damaged both snowmobiles, leaving them no choice but to build a makeshift shelter with their sleds and a tarp and pray for help.

They were rescued Nov. 20 by a group of friends and family.

The eighth most read story concerned a pod of about 20 beluga whales that became trapped in ice near Sanikiluaq in February.

Polar bears had eaten many of the whales by the time hunters discovered the breathing holes. The hunters then harvested some of the whales for the community, several of which were badly wounded by bear attacks.

The last two top 10 stories highlighted the ongoing struggles of Nunavummuit to stay healthy, in body and mind.

One involved the shocking suicide of an 11-year-old boy in Repulse Bay this August, which sparked oft-repeated calls for increased suicide prevention efforts in Nunavut.

The 10th most read story, which drew readers by the thousands this year, was a piece describing the efforts of Kugluktuk to quell an outbreak of scabies, tiny parasitic mites that spread by skin-to-skin contact and cause an itchy rash and sores.

Other popular stories, just outside the top 10, included coverage of the Nunavut territorial election on Oct. 28.

And our Nov. 15 story covering the election of Peter Taptuna as premier was the 11th most-read story.

We’d like to give two honourable mentions for a pair of bizarre stories that also drew plenty of readers.

The first goes to Darren Edward Cosby, the over-refreshed ironworker from the United Kingdom whose unruly behaviour caused an Air Transat flight to make an emergency landing in Iqaluit March 27.

That story drew more than 4,400 pageviews.

Cosby, whose behaviour was apparently out of character, had to be restrained and kept in a headlock for more an hour until the plane landed.

The other honourable mention goes to those American reality TV eccentrics who tried to travel through the Northwest Passage on jet skis in August.

Canadian Coast Guard members aboard the CCGS Sir Wilfred Laurier rescued the men from Franklin Strait, located between southeastern Prince of Wales Island and the Boothia Peninsula, and dropped them off in nearby Gjoa Haven, the community from which they had departed only days earlier.

Web statistics show that one fifth of all our page views came from Iqaluit. Our second largest audience, at nearly 17 per cent, came from Ottawa.

After that, it was Montreal, with 10 per cent, Winnipeg, with five per cent, and then Toronto with 3.5 per cent.

Other cities and towns that appear to click through to Nunatsiaqonline.ca with frequency include Yellowknife, Edmonton, Gatineau and Cambridge Bay.

Of the more than 2.2 million visits that Nunatsiaq Online received in 2013, 286,406 came from the Government of Nunavut network, 273,380 from Northwestel customers, 266,518 from SSI Micro customers and 154,391 from the Keewaytinook Okimakanak network, which covers Nunavik’s Tamaani internet service.

Others came from customers of firms such as Shaw, Videotron, Telus and Rogers. 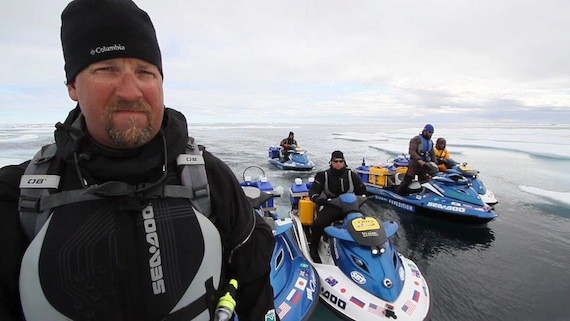 Steve Moll, the host of MAVTV’s “Dangerous Waters,” is shown here with the other jet-skiers in a photo from the show’s Facebook page.