How to build for Nunavut: Arctic Adaptations looks at the possibilities

“Looking at the opportunities of the next 10 and 15 years” 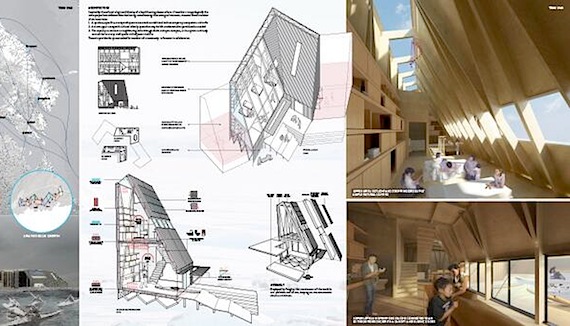 The winning Arctic Adaptations design team for housing in Nunavut came up with this. The members of the team will be at this week’s Nunavut trade show to talk more about their ideas and get feedback from people in Iqaluit. (HANDOUT IMAGE) 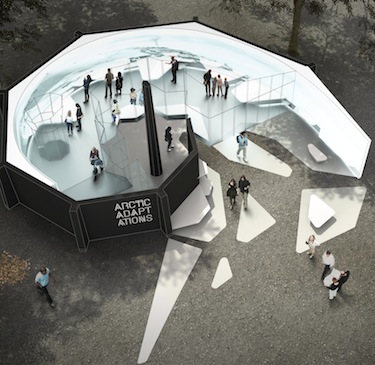 This artist’s depiction shows the mock-iceberg-like design planned for the Canadian pavilion at the 2014 Venice Biennale in Architecture. (HANDOUT IMAGE)

Five design teams want to create new ideas on how to build in Nunavut for Arctic Adaptations, an exhibit they will share with the world at an architectural show in Venice, Italy in 2014, to promote the 15th anniversary of the creation of Nunavut.

The design team that is looking at new housing options for Nunavut will visit Iqaluit to share the project with Nunavummiut at the Nunavut Trade Show and Conference, Sept. 24 to Sept. 26.

Typical living designs in Canada like “suburbia,” with houses on lots, have been imported into the North, said Toronto-based architect Mason White, who heads up the Arctic Adaptations project with his architectural design firm called Lateral Office.

“This is why the project, launched last March, is called Arctic Adaptations — maybe we haven’t been as intelligent as the Inuit have been, in adapting to place,” he said. “Maybe architecture and city-building hasn’t capitalized on a more adaptive or responsive system.”

The final project will head to the Venice Architectural Biennale in June 2014.

Timed to coincide with Nunavut’s 15th anniversary, the exhibit also offers a chance to reflect on the territory’s fast growth and rapid change, White said, which many Inuit and other residents have seen in their lifetimes.

A broader goal of the project is to consider how quickly that occurred, “with so many things being urgent relative to issues like health and housing,” White said.

Each of the project’s teams — of university architecture students, architects specialized in Nunavut and the North, and Nunavut-based organizations— is focusing on one of five themes: health, housing, education, arts and recreation.

Three of the teams are fully-formed and well underway with work on designs for housing, health and arts facilities for Nunavut.

Student members of the health team, from the University of British Columbia, came recently to Iqaluit to work with the Qaujigiartiit Health Research Centre. Next in town will be members of the housing team, who will attend the Nunavut Trade Show and meet with the Nunavut Housing Corp.

The key challenge put to each of the teams is how housing, health and arts are accessed and delivered in Nunavut and how these can be expressed through buildings designs.

The housing team plans to pick up ideas from the Housing Corp. on the economics of housing in Nunavut, and design ideas on energy efficiency, materials and interior design, “and maybe even greater inclusiveness of traditional life,” White said.

A chance to reflect on designs in the territory are not easy, he said, given costs and pressures to fill the urgent need for housing.

“This is why Nunavut-based organizations are so important to this process,” he said, with Arctic Adaptations designers hoping to come up with ideas that will contribute to the development of Nunavut.

“It’s not about solving the problems of tomorrow,” White said, “but looking at the opportunities of the next 10 and 15 years.”

Adapting to the unpredictable of climate and cultural changes, as global warming continues and Nunavut’s population grows, will also factor into designs, he said.

“Ultimately the goal for the exhibition is an architectural model,” which will offer some original ideas, White said. “The hope beyond that would be that as these ideas enter discussion, that some communities may take these ideas and want to continue them.”

Arctic Adaptations will debut at Venice Architecture Biennale in Venice, Italy on next June where designs will be on display at a Canadian pavilion until November. The exhibit will return to Canada in in 2015.