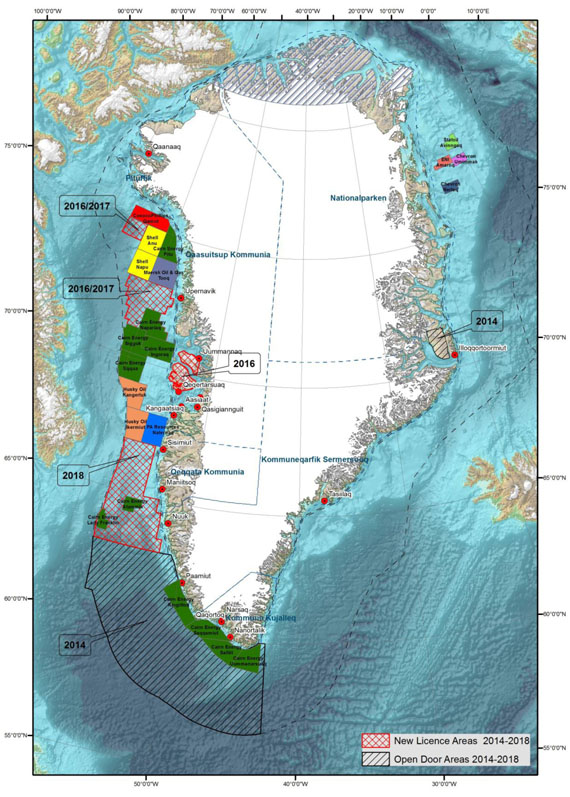 This map, published by Greenland’s mineral authority in 2014, shows the blocks of offshore territory that have been or will be made available for oil and gas exploration. (GREENLAND MINERALS AUTHORITY)

The Inuit Circumpolar Council’s Greenland wing is “immensely worried” about the prospect of oil and gas exploration in Baffin Bay, the organization said in a New Year’s message shared with Nunatsiaq News.

And the ICC said it has found those worries are shared on both sides of the Greenland-Canada boundary.

“The hunters from both sides of the Baffin Bay are deeply sceptical towards this development. Other ICC regions together with ICC Greenland are immensely worried about offshore activities,” Hjalmar Dahl, the president of ICC-Greenland, said in the message.

Last December, Dahl conveyed the same thoughts to Greenland’s mineral authority, which is assessing the potential environmental impact of oil and gas exploration in Baffin Bay, off northwest Greenland.

And, in a Dec. 20 communication to the Greenland government, Dahl said it’s an issue of concern to Inuit who live on the Canada side of Baffin Bay.

“The reason for that being that sufficient knowledge and data regarding the extent and the quantity of the supply of mammals from this marine area are non-existing, even though it is explicit knowledge that the area has an invaluable importance both here in Greenland and on the other side of the Baffin Bay in Canada,” Dahl said in an English translation of his remarks.

Dahl pointed to the commission that the ICC set up to look at the status of the 85,000-square-kilometre North Water Polynya, or Pikialasorsuaq, an ecologically rich zone of open water at the northern end of Baffin Bay between Greenland and Ellesmere Island that feeds numerous marine mammals and birds within its unusually warm microclimate.

This past September, the ICC commission, headed by two former government leaders, Eva Aariak of Nunavut and Kuupik Kleist of Greenland, recommended the area be managed jointly by Inuit on either side of the Canada-Greenland boundary.

“Most emphatically, Inuit want to build a caretaking regime for the polynya together as Inuit living, though divided by country, from one sea,” Kuupik Kleist said last year.

In the same vein, Dahl told the Greenland government that any serious incident in the area could have international implications.

“In the case of this area of the [Baffin] Bay close to their native soil being polluted, this will not only have consequences for the Greenlandic part of the Bay area, but in the same way for the Canadian [Baffin] Bay areas, where our kinsmen are living and have their home,” Dahl said.

For that and other reasons, ICC Greenland said they support the bans on offshore Arctic oil and gas licencing recently announced by U.S. President Barack Obama and Canadian Prime Minister Justin Trudeau.

These kinds of positions stand in contrast to remarks that Vittus Qujaukitsoq, Greenland’s minister of economic development, made in Quebec City this past December.

In a blunt speech, Qujaukitsoq criticized the Obama administration and its chairmanship of the Arctic Council for “focusing perhaps too much on the policies of the past” and for working to stop oil and gas development.

The Greenland minister said Dec. 12 his government welcomes Donald Trump’s pro-oil administration and in an oblique reference to Rex Tillerson, whose nomination was imminent that day, he said he welcomed the ExxonMobil tycoon’s appointment to the post of United States Secretary of State.

And he said Greenland wants the rapid development of oil, gas and minerals to finance its future independence from Denmark.

For his part, Dahl said that although ICC-Greenland is sceptical of oil and gas development in Baffin Bay, they support economic development in general.

But he also said decisions about development must involve the citizens who are most likely to be affected.

“Regardless of which political initiatives may be taken, the most fundamentally decisive to ICC Greenland is that the decision processes are being completed under observance of democratic principles,” he said.

However, it appears as if people on either side of the Greenland-Nunavut boundary may not see much oil and gas activity for a long time to come.

This past Dec. 28, the English-language Arctic Journal, based in Nuuk, published an English translation of an article that first appeared in the Greenlandic-Danish newspaper Sermitsiaq, reporting that no firms have responded to a recent call for bids to explore for oil off the west coast of Greenland.

And the same story reported that other firms are allowing existing permits to expire.

“On December 31, all nine of the current offshore licences to explore for oil and gas in Baffin Bay, near Disko Island and in the waters off Nuuk, are set to expire, and it is looking increasingly unlikely the firms holding them will move to renew them,” the Arctic Journal story reported.