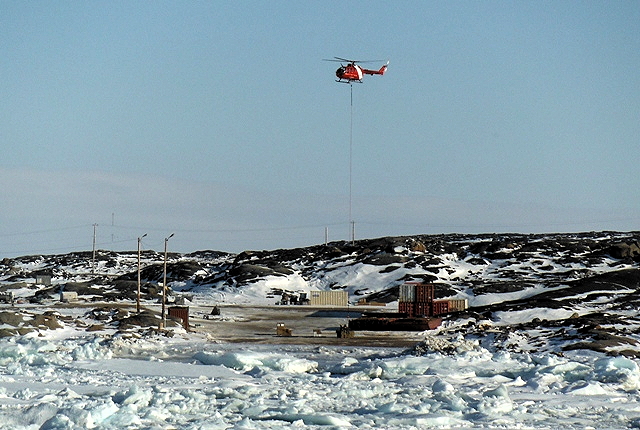 A Canadian Coast Guard helicopter delivers freight to Kugaaruk in late September before the CCG called off its sealift operation in that Kitikmeot community due to unsafe ice conditions and weather. (PHOTO COURTESY CANADIAN COAST GUARD) 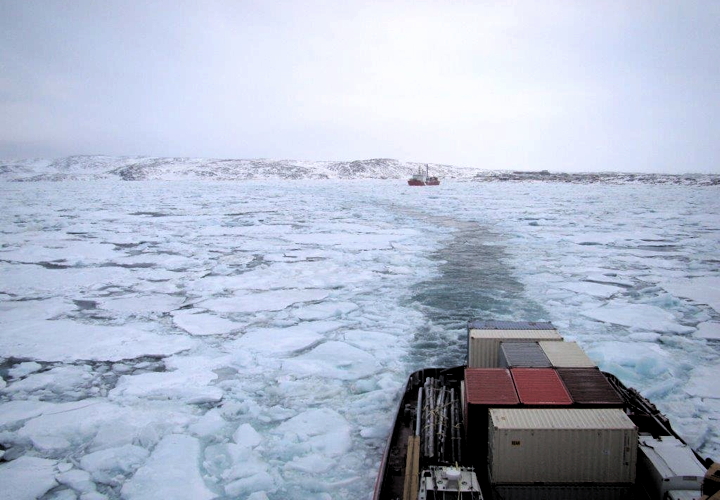 An unprecedented build-up of multi-year ice, coupled with bad weather, has sent a portion of Kugaaruk’s sealift re-supply this year to Churchill, Man., after the Canadian Coast Guard stopped its delivery in late September.

Carol Launderville, a spokesperson for the Canadian Coast Guard, said the bulk of this year’s cargo was delivered to Kugaaruk by barge and helicopter but by the end of September, weather and ice prevented crews from completing the job.

In need of a port to off-load the remaining supplies, and a storage facility to put them in, the Government of Nunavut sent instructions for the CCGS Terry Fox and CCGS Des Groseilliers to leave St. Peter’s Bay near Kugaaruk and head to Churchill.

“This is the first time that the Canadian Coast Guard has been unable to deliver freight into Kugaaruk due to ice conditions,” said Hillary Casey in an email to Nunatsiaq News.

Casey handles communications for the GN’s department of Community and Government Services, which is coordinating redirection of the freight.

Most communities in Nunavut get sealift re-supply directly from private carriers, except for the station at Eureka on Ellesmere Island and Kugaaruk.

Kugaaruk is unique in that the shipping companies NEAS and NSSI deliver goods as far as Nanisivik and then the Coast Guard delivers them to their final destination.

“Difficult and persistent ice conditions along Kugaaruk’s shoreline at the end of September 2014 made it unsafe to use the barge to offload cargo,” said Launderville.

“All efforts were made to offload as much cargo as possible in Kugaaruk via CCG helicopter before local conditions forced a stop to further efforts.”

Casey said the Coast Guard had made three successful trips from Nanisivik starting Aug. 27 and had delivered 48 sealift containers — or approximately three-quarters of the cargo — to Kugaaruk.

The Coast Guard delivered the remainder of the cargo to Churchill on Oct. 6. It consists of:

• one garbage truck for the hamlet;

• one seacan for the hamlet; and,

Casey said the garbage truck will be transported back to Montreal for delivery next year. The GN will work with the hamlet to determine whether the remaining seacan is required and if so, how to get the cargo delivered.

She said the cost and timeline of such a delivery is yet unknown.

The co-op and the Qulliq Energy Corp. will have to make their own freight arrangements from Churchill, she added.

Launderville said that the amount of cargo destined for Kugaaruk was greatly increased this year and required the CCG to begin delivery earlier than usual.