Ikaarvik bridging the gap between Arctic science and northern needs 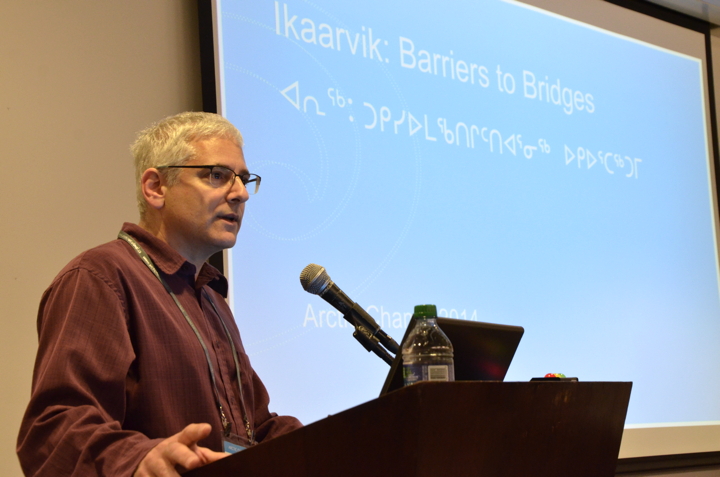 Oftentimes, little thought is put into what the communities might actually think is important to study, and what would make a difference in their day-to-day lives.

That’s a trend Ikaarvik looks to buck — by creating opportunities for Arctic scientists to conduct better science based on community needs.

That means going from community-based research to “community-directed research.”

“Basically it involves identifying issues in the community. And then identifying an area of research that is of most interest,” Ikaarvik team leader and the Vancouver Aquarium’s Arctic programs director Eric Solomon said to his audience at the Arctic Change conference in Ottawa Dec. 11.

Ikaarvik is Inuktitut for “the bridge” — a fitting metaphor for a program that aims to connect southern researchers with the needs of northern communities.

Almost exactly one year ago, at last year’s ArcticNet conference, Ikaarvik was awarded a $325,000 prize to continue their program and the money has helped their mandate blossom, Solomon explained.

“Money aside, it’s just a vote of confidence,” Solomon said.

“When you live in the North and hear all this negativity and sad stats, and then you have someone to give you that vote of confidence that what you’re doing is necessary, it’s a game changer.”

The money has allowed the Pond Inlet-based Ikaarvik to reach out to more communities, too.

They’ve already conducted interviews with hamlet councils and hunters and trappers organizations, for example, and identified pressing issues in communities such as Pond Inlet, Gjoa Haven and Cambridge Bay. Kugluktuk and Pangnirtung are on the list for next year.

That community-to-researchers approach hasn’t come to full fruition yet, but now with extra money, Solomon said the group can start making community-directed research projects a reality.

“To reduce the fear factor. To see themselves as part of science,” said Shelly Elverum, the northern coordinator at Ikaarvik and instructor at Pond Inlet’s Environmental Technology Program.

Until now, communities have often been left frustrated by science projects thrust upon them — projects that don’t necessarily make sense to residents, said Elverum, who sat on the Pond Inlet hamlet council for three years.

“In my experience, science is trying. They might just not know the right way to listen,” she said.

But this bridge goes two ways. Aside from Nunavut communities embracing science, Ikaarvik is allowing southerners to learn about and embrace Inuit culture.

Ikaarvik has toured southern Canada with a youth group, visiting a variety of venues from zoos to research centres to the Vancouver aquarium, to teach volunteers, researchers—and just about anyone that wants to listen—about the Arctic.

One of those participants on the “Southern Expedition” was Mia Otokiak of Cambridge Bay, who said some southerners thought Inuit still lived in iglus.

“I literally got someone to believe that I have a pet penguin,” Otokiak said to a laughing crowd.

“These are things people actually believe. To be able to open their eyes is so amazing.”

“That person now who is communicating at the aquarium, to a million people per year, can say, ‘I know this really great kid who is so passionate about this animal. And let me tell you what he told me about what this whale means to him,’” Elverum said.

“Suddenly it’s not just this white wilderness of these happy belugas and their smiles and icebergs. It’s a home to people who really care,” she said.