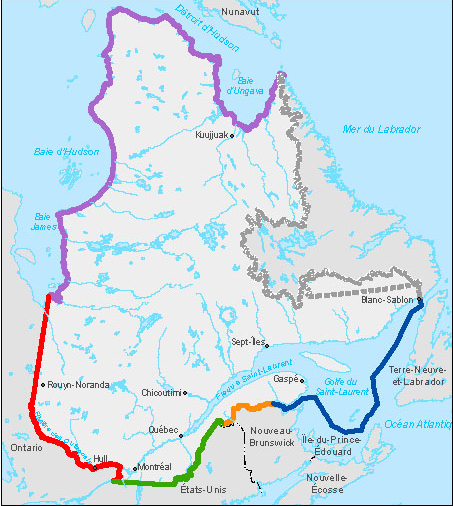 Nunavut Senator Dennis Patterson said Dec. 10 that numerous parties, including indigenous peoples, must be part of any decision to change Quebec’s offshore boundary. He also said a big forum involving indigenous peoples and governments may be the best way to create “clearly defined offshore management regimes for all marine regions in the Canadian Arctic.” (IMAGE COURTESY OF ENERGY AND NATURAL RESOURCES QUEBEC)

Quebec’s desire to re-negotiate its maritime boundary with Nunavut raises big issues that ought to be discussed within a forum that brings together all affected governments and Indigenous peoples, Conservative Nunavut Senator Dennis Patterson said in the Senate Dec. 10.

“It is only in this spirit of respect for the shared common interests of the Indigenous residents, the adjacent provincial-territorial governments, and Canada, that this important issue will be resolved in the interests of proper stewardship of Canada’s longest coast,” Patterson said in a statement.

Patterson said he understands Quebec’s position — and supports anything that would contribute to infrastructure spending anywhere in the Arctic.

But he also said the issue affects Indigenous peoples and other governments, all of whom must be consulted.

“I want to stress that there are other parties whose interests would be affected by this initiative. And there are larger interests at stake,” Patterson said in his statement.

The issue first arose this past summer, when Quebec Premier Phillipe Couillard pointed out that his province is hemmed in by a maritime boundary that runs along its shoreline.

That means all waters adjacent to Quebec in James Bay, Hudson Bay, Hudson Strait and Ungava Bay are under Nunavut jurisdiction.

“It’s a major problem for the province of Quebec, when you have your border so close to the shore that you can’t have a deep sea port,” said Jean Boucher, the member of Quebec’s National Assembly for Ungava, told Nunatsiaq News last month.

And that could create problems in future when the Quebec government implements Plan Nord, which has envisioned sea ports in communities like Kuujjuaraapik.

The same issue affects Manitoba and Ontario, whose marine boundaries with Nunavut stop at their shorelines.

This past October, Nunavut Premier Peter Taptuna said Nunavut has no interest in talking to Quebec about the issue.

Hudson Bay MLA Alan Rumbolt has said the people of Sanikiluaq, which lies on the Belcher Islands off Quebec’s Hudson Bay cost, must be consulted before the Quebec-Nunavut boundary is changed.

And the Makivik Corp., which has signed a constitutionally-protected offshore agreement with Ottawa, has already said the Quebec-Nunavut boundary cannot be changed without the consent of Nunavik Inuit.

In his Dec. 10 statement, Patterson said he agrees with Rumbolt — and that many affected parties must be consulted on the issue.

“Not only do I believe that the residents of Sanikiluaq should be consulted, but I believe the governments of Canada and Quebec must consult with and involve all parties who have a common interest in the clarification of offshore boundaries in Hudson Bay,” he said.

That includes the Indigenous peoples of Nunavut, Nunatsiavut and northern Quebec, including the Cree and Inuit.

“We must firstly be aware of our obligation to respectful consultations with the Indigenous residents of the Arctic, whose marine economies and occupancy have helped Canada establish its own sovereignty over these waters,” Patterson said.

And at the same time, he said the governments of Nunavut and Newfoundland-Labrador must also be consulted.

Patterson also proposed the creation of a forum that would bring together all groups with an interest in the Arctic offshore, including the Inuvialuit of the Northwest Territories, the Inuit of Nunavut, Quebec and Labrador, and the Cree of Quebec, all of whom have signed offshore agreements with Canada.

“Imagine the potential of a forum where all interested Indigenous peoples and governments could work together in common cause and co-operation to oversee the protection and development of our Arctic offshore,” Patterson said.

That, in turn, would lead to “inclusive and clearly defined offshore management regimes for all marine regions in the Canadian Arctic” — giving more say to Indigenous people and public governments in the area.