“No one has walked this trail in 60 years” 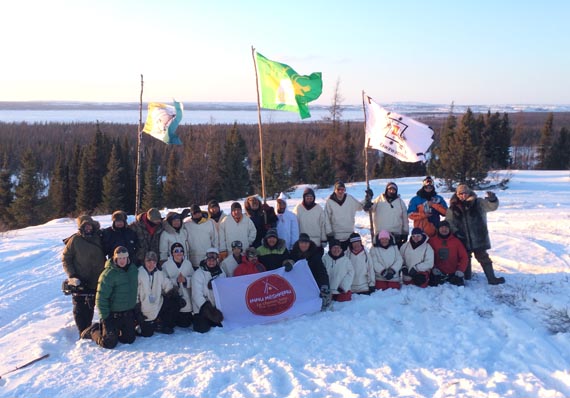 The Innu Meshkenu project’s 19 walkers and eight technicians/guides pose for a photo ahead of their arrival in Kuujjuaq March 25. (PHOTO COURTESY OF MATHIEU GRAVEL)

When the community of Kuujjuaq first came into view March 24, Dr. Stanley Vollant fell to his knees. Then he cried.

When Vollant and 18 other Innu, Naskapi and Inuit left Matimekush (Schefferville) on foot 27 days earlier, Kuujjuaq had seemed like a world away.

More than 450 kilometres later, the site of the Nunavik community was a welcome one for the group of tired walkers.

“This is it,” Vollant recalled. “It was very emotional.”

The group spent the night about eight km outside of town, before walking the final leg and arriving to a group of family, friends and well-wishers along the frozen Koksoak River March 25.

Vollant, Quebec’s first Innu surgeon, has walked thousands of kilometres between Aboriginal communities across eastern Canada as part of his Innu Meshkenu project, to promote physical activity and healthy living among Aboriginal people.

It might have been his coldest, too. Many in the group succumbed to frostbite.

“It was the most difficult expedition I’ve organized so far — I’ll never forget it,” Vollant said.

“But this was an historic event because no one has walked this trail in 60 years,” he explained. “For us, it was like walking in the footsteps of our Innu, Naskapi and Inuit ancestors.”

The hunting and trading route between Schefferville and Ungava Bay has long served as a link between Innu and Inuit families.

Elders say the last group to cover the distance on foot may have been the Naskapi, who migrated from Kuujjuaq — then Fort Chimo — to the iron-ore town of Schefferville in 1956.

“It was tough at first, having to walk so much,” said 20-year-old Petagumskum of Kuujjuaq. “But we were taking it day by day.”

The group set goals of completing 23 kilometres each day, but that depended on weather and the group’s energy level, he said. On top of walking, the group had to set up camp, prepare food and melt snow for water.

“Every morning our water bottles were frozen, and we had to defrost them,” Petagumskum said. “Sometimes I told myself, why I am doing this?”

“But then I thought, if I can do this, I can do anything,” he said. “And it’s a very good experience — you get to see your land and it’s pure.”

Since he returned home to Kuujjuaq March 25, Petagumskum is still running on adrenaline. He’s already called the Royal Military College in Kingston, Ont., to kick-start the application process to get into the school’s Aboriginal leadership program this summer.

And that’s exactly the impact Vollant hopes his walks will have on youth in the communities he visits.

“That’s the goal of these trips — to talk to these kids,” Vollant said. “And I’ll tell them: you have to believe in your dreams and never give up on them.”

“All the great men and women of this world were able to rise up over obstacles to realize their dreams.”

Vollant will take with him what he considers his most powerful tool: a walking stick an elder gave him years ago, which has accompanied him on all of his walks.