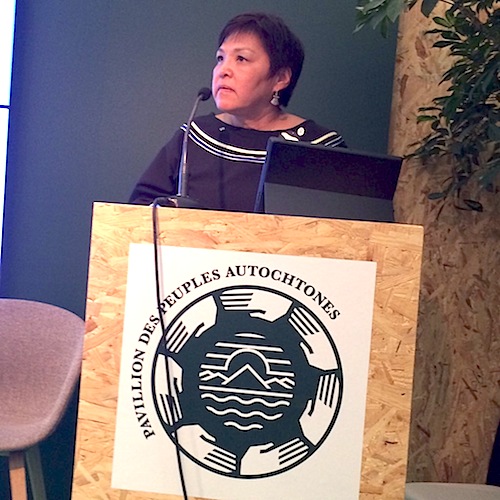 ICC President Okalik Eegeesiak speaks Nov. 30 — in Inuktitut— at the opening of the Indigenous pavilion at COP21 in Paris. (PHOTO COURTESY OF ICC)

“The health and well-being of Inuit and Saami are inextricably tied to the Arctic environment and, in particular, [to] the tundra, the marine environment and the snow and ice.”

That was the message delivered Nov. 30 by Okalik Eegeesiak, chairperson of the Inuit Circumpolar Council, at the grand opening of the Indigenous Peoples Pavilion at the COP 21 climate change meeting in Paris.

More than 40,000 diplomats and delegates will meet in Paris until Dec. 11 with the goal of reaching a global agreement to curb climate change.

And during COP 21 Eegeesiak and Aile Jávo, the president of the Saami Council, will co-chair the Arctic portion of the International Indigenous Peoples’ Forum on Climate Change, open to all attending COP 21.

“Inuit and Saami are deeply concerned about the actual and potential impacts of climate change on their cultural, social and economic health and corresponding human rights,” Eegeesiak said in a Dec. 1 ICC news release.

“Indigenous peoples remain closely connected to the land in every region of the globe. We are hunters, fishers, agrarians. We live on the ice, snow, the tundra, on the coastlines, in the forests, mountains, deserts and savannas.”

There’s reason to be concerned: in the Arctic, liming average global temperatures to a two-degree rise — the goal of COP21’s future pact — will still see Arctic temperatures increase by at least 3 C to 6 C higher by 2100.

Eegeesiak, who spoke in Inuktitut, thanked all Indigenous peoples in Paris who, “are here because we share a common concern.”

Those concerns include migration and relocation, ocean acidification and warming, sea level rise and extreme weather events as a result of climate change, she said.

”Government leaders, indigenous peoples, industry and NGOs [non-government organizations] must work together from the community level to the heads of state. Climate change does not divide us — it unites us — with a common goal to make certain all peoples can live in their homelands, support their children and leave the world a better place,” Eegeesiak said.

Eegeesiak was to meet Dec. 2 with the president of France, François Hollande, when, among other topics, she planned to discuss the ICC’s COP21 position paper.

Jávo, in her address to the forum, said activities such as reindeer herding, fishing, hunting and gathering remain important livelihoods for Saami, the Indigenous people, now spread between Norway, Sweden, Finland and Russia.

“The traditional livelihoods are fundamental for Saami culture and the only way of life for many Saami people,” Jávo said. “The Arctic, including traditional Saami territories, is facing more rapid and large scale changes than ever before.”

On Dec. 8, Arctic Day at the COP 21 Indigenous venue, Eegeesiak and Jávo will participate in a panel discussion with Inuit climate activist Sheila Watt-Cloutier, Cathy Towtongie, the president of Nunavut Tunngavik Inc., Reggie Joule, the former mayor of Alaska’s Northwest Borough, and Maatalii Okalik, the president of the National Inuit Youth Council.

Arctic Day will also include the screening of Saami and Inuit films, including “The Last Yoik of the Saami Forests” and Zacharias Kunuk’s “The Journals of Knud Rasmussen.”