Inuit throat singers to be featured in museum karaoke booth

“If you feel a slight tingle in your throat, you’re hitting the right spot” 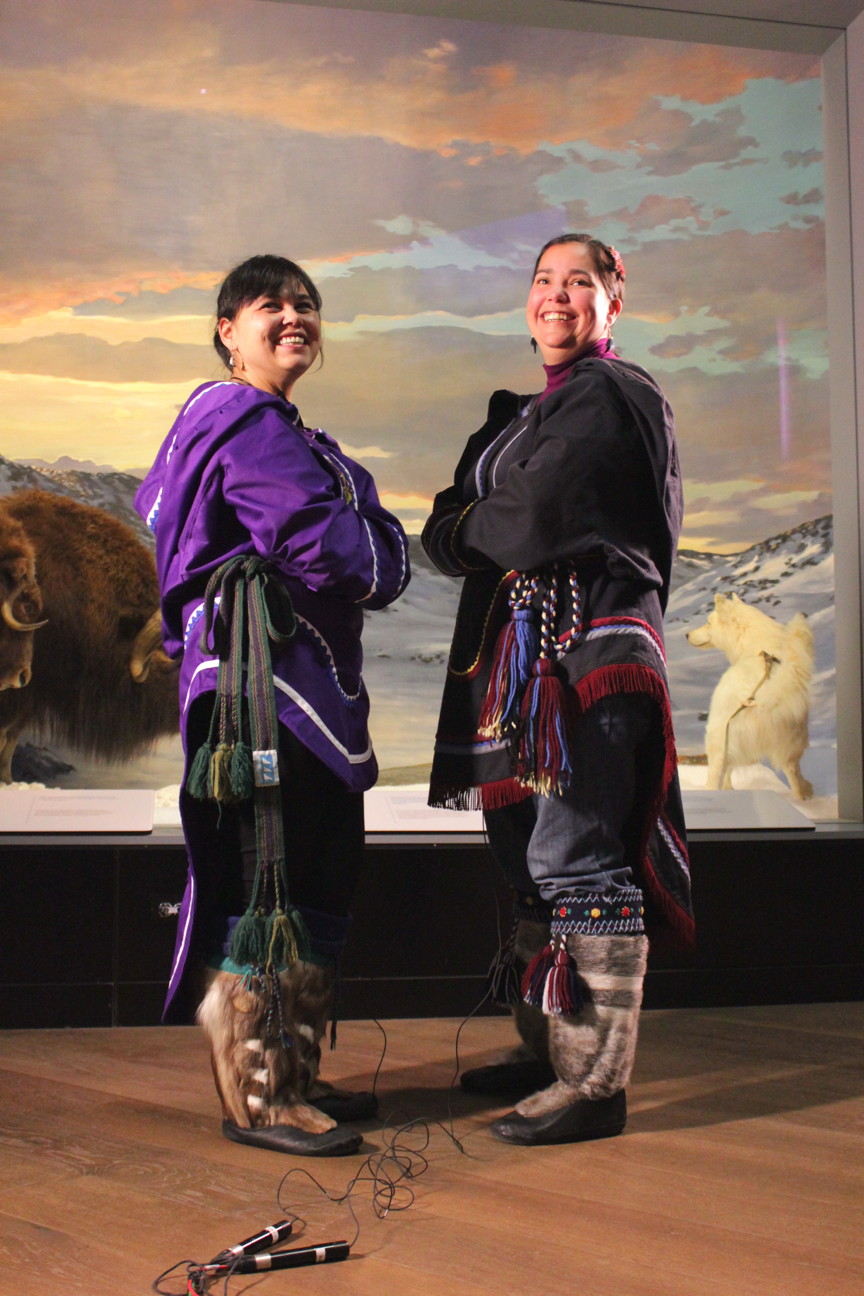 Lynda Brown, left, and Heidi Langille, will help thousands of people across North America learn how to throat sing thanks to a new karaoke booth being constructed for an upcoming travelling exhibit that will come to the Canadian Museum of Nature in Ottawa in November 2014. (PHOTO BY LISA GREGOIRE)

OTTAWA — “Now we’re going to show you how to throat sing,” says Lynda Brown, to no one really, just a video camera.

“If you feel a slight tingle in your throat, you’re hitting the right spot,” she says smiling. “It takes years of practice to make that go away.”

She’s about to continue but trips over a word and stops, laughs, looks at the camera, sighs.

Members of the production team smile back sympathetically. She’s started and stopped a half dozen times and is getting exasperated.

“Maybe you should try,” she says to her friend, Heidi Langille.

Brown, Inuit Family Literacy Coordinator with the Ottawa Inuit Children’s Centre and Langille, a founder of and coordinator at the OICC and currently seconded to the Children’s Aid Society as an Inuit liaison officer, have volunteered to do something unusual: throat sing with an imaginary partner.

That partner will become thousands of people from across North America who step into a special booth designed to educate people about throat singing and then teach them how to do it themselves. They’ll even be able to record themselves singing “Hum-ma” with Langille.

Science North is currently negotiating with two Canadian and two American institutions who want to be part of the Arctic Voices tour after that.

The idea for a karaoke-style teaching booth came from Laurel McIvor, the Canadian Museum of Nature’s project leader for education programs.

Through her work at the museum, McIvor has many contacts within the Ottawa Inuit community and she thought it might be interesting to create an environment where members of the public can learn about throat singing by giving it a try.

“I would imagine the majority of people will be happy to see this because it’s not well known,” said Brown. She admits, though, that the booth will seem strange to some Inuit, especially elders.

“I’m sure elders will struggle with the technology — you teach a computer and then the computer teaches someone else. It will be odd to them,” she said. “But I’m from the school of: you share what you know. And this is just another way of sharing.”

Respect for cultural traditions and a desire for Inuit to speak in their own voices was top of mind for Henry, in putting together Arctic Voices.

“We’re very excited about this,” said Henry. “Our goal from both agencies was to ensure that when we were including Inuit cultural references, ideas and activities, that it was done with the appropriate approach. That it was done in a culturally sensitive way — that it wasn’t us telling others about Inuit but that we were using an inclusive Inuit voice.”

The travelling exhibit will feature many aspects of the Arctic from animals to plants, landscapes, the changing climate, archaeology, economic development and sustainability.

She said planners wanted to dispel some of the myths around iconic polar bears on barren, white tundra and show the depth and complexity of Inuit culture and a modern Arctic.

Langille, originally from Nunatsiavut, and Brown, whose mother is from Pangnirtung, will form part of that cultural richness.

But on Nov. 25, during filming for the karaoke booth, it’s difficult to act authentic beneath hot lights with microphones and cameras and a cluster of stuffed muskox behind them.

Dressed in amautiit and kamiks, the two women hold forearms, sway and sing a variety of songs to showcase the breadth of sound and rhythm possible in throat singing so videographer Emmanuel Menezes can record some samples for the video reel.

Menezes and Pierre Poirier, who’s co-ordinating the shoot, periodically adjust them and offer basic instructions but for the most part, they let the women do what makes them feel comfortable.

Poirier reminds them to stand still when a song is completed so they can edit the songs together to form the introduction to the booth’s karaoke lesson.

The women explain that in throat singing, the object is to make the other person laugh but that some of their songs are perhaps going on a bit long. He tells them to feel free to stop the song and laugh. “Just laugh and then pause,” he says, adding, “you know, naturally.”

The morning is full of good-natured jokes and giggle fits. During a performance of the song “Poor Little Dog,” Brown genuinely starts laughing and Langille forgets herself and lets out a triumphant, “Yes!” She quickly apologizes. “Sorry. I was so excited because I hardly ever beat Lynda.”

The exhibit is slated to travel for five years around North America.

Because it’s a travelling exhibit, it’s important to grab someone’s attention quickly because they’ll only see it once, says Caroline Lanthier, the project lead for the museum.

This throat singing booth, she says, with its unique content and interactivity, will make an ideal addition.