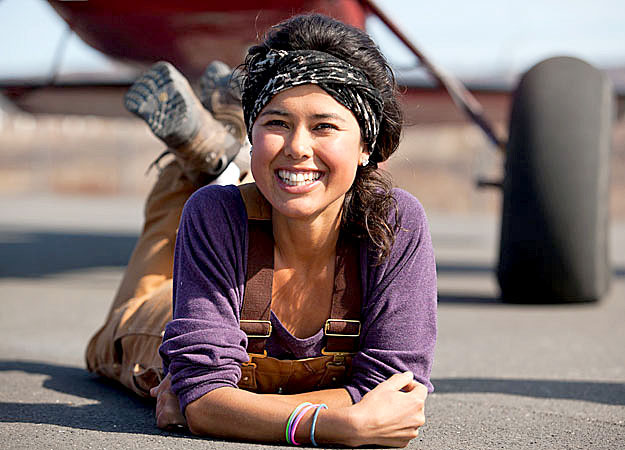 People in Kugluktuk are buzzing about the upcoming visit later this month of the Alaskan Inuk reality television star, Ariel Tweto.

She has also appeared on the Craig Ferguson and David Letterman late-night talk shows. (See video embedded below.)

But Tweto isn’t coming to Kugluktuk to entertain; she’s coming to talk about suicide prevention.

The local Society for Building a Healthier Kugluktuk, along with the Kugluktuk Radio Society, have invited Tweto and her father Jim to visit their community March 16 to March 18 to talk to former residential school students, parents and youth about inspiration and setting goals.

In a March 4 news release, Tweto said she’s flattered to be invited to speak to Kugluktummiut.

“I have been very lucky so far in life and I think it has a lot to do with my outlook, the people I surround myself with, my upbringing, family, and my goal setting,” Tweto said in the release. “I want to share my experiences with others and hopefully inspire people to step outside of their comfort zone and to dream big.”

“I ask myself almost every day, what is my reason for waking up today?” Tweto continued. “And most days I have an answer, if I don’t have one, I go and find it! I want to help people find a reason to wake up…. oh yeah, and I’m really excited to eat some home cooked country food!!!!”

Tweto’s visit comes on the heels of 2013, which counted the highest number of suicides — 45 — for any given year since Nunavut’s creation in 1999.

“Kugluktuk really needs to change so the whole community comes together to deal with trauma,” said Sheila Klengenberg, a founding member of Healthy Kugluktuk.

“Ariel’s visit with her Dad is a game changer for the average person… here’s a young Inuk woman who dreams big and works toward her goals with her family’s support. We appreciate Ariel coming here to talk around with youth, parents and elders.”

Although Tweto comes from another region, Kugluktummiut are connected closely to the Inupiat of western Alaska, local people say.

“Ariel is a big inspiration to the youth here in Kugluktuk,” said Donna Pangun, one of Healthy Kugluktuk’s Cultural Support advisors. “Her happiness and love of life really catches on… she’s just a lot of fun, but she has a powerful message to share.”

“We are very happy Ariel is coming to visit us in Kugluktuk,” said community member Wendy Bolt. “My husband and I are big fans of Flying Wild Alaska, my youngest loves shows about planes, and it’s not very often people from a TV show come here.”

Flying Wild Alaska aired on Discovery Channel in 2011 and 2012, featuring the Tweto family from Unalakleet who run the airline Era Alaska.

Ariel was featured in the series as part of the airline’s air crew; she eventually earned her private pilot’s license in 2012.

Tweto said her goal is to travel to other remote communities to meet with residents and “show people that there are options and the opportunities that exist are limitless.”