“It’s absolutely heart-breaking that the sharing had to stop” 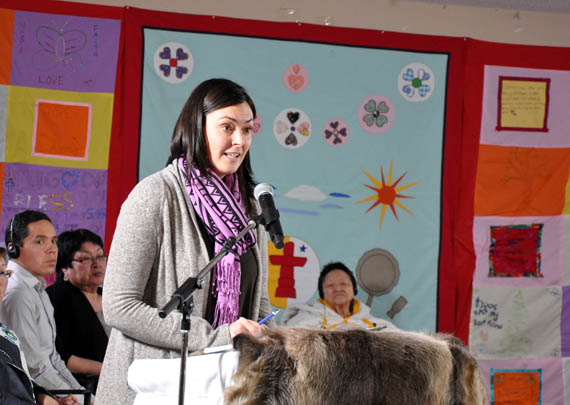 MMIWG commmissioner Qajaq Robinson speaks at the opening of the inquiry’s public hearing in Rankin Inlet last February. Commissioners return to Nunavut next month for institutional hearings to be held in Iqaluit Sept. 10-13. (FILE PHOTO)

It’s not the same amount of time commissioner Qajaq Robinson hoped to give to such a complex subject and to the hundreds of survivors and families who’ve contacted the inquiry over the last 18 months to share their stories.

“But it’s important that we come [to Nunavut],” she said. “The dynamics are different.”

The National Inquiry into Missing and Murdered Indigenous Women and Girls is moving into its last four months of work, including four hearings—one of which will be held in Iqaluit on Sept. 10 to Sept. 13.

For those who watched the first community hearing in the territory, held in Rankin Inlet last February, Robinson is quick to point out that Iqaluit’s hearing will be structured differently.

The September event is called an institutional or expert hearing, which focuses on a particular theme—in this case, colonial violence.

Those present will hear from an expert panel on that subject, which will include academics but also elders and people with lived experience. Organizations that have applied for standing, such as Pauktuutit Inuit Women of Canada and Inuit Tapiriit Kanatami, will be able question the witnesses.

Robinson said the hearing will have an Inuit-specific focus, although it’s considered a national event.

“We heard from families in Rankin Inlet about how hard it was to get help when you know a loved one is in danger because of domestic violence,” she said.

“What’s been made clear in our work is that the violence experienced by Indigenous women and girls is not just physical violence, but the denial of rights and liberty,” she said.

“So it’s really important that we heard about [things like] the disruption of community and family dynamics, the disruption of inherent governance and legal systems—that has had a big impact on societies and individuals.”

Iqaluit-Manirajak MLA Adam Lightstone said he and his fellow Iqaluit MLAs reached out to the inquiry earlier this year, in hopes commissioners would decide to return to Nunavut.

“When the commission visited Rankin Inlet, I thought it was a very important moment for Nunavut,” Lightstone said. “I was really hoping they’d come back to the territory.”

Lightstone, whose sister and two nieces were murdered in 2011, called domestic violence a “silent epidemic” in Nunavut. While he’s disappointed it’s not a community hearing, Lightstone hopes the event will help to bring that issue to the forefront.

The list of witnesses scheduled to speak at the Iqaluit event will be released sometime over the next week. The hearing is open to the public and will offer interpretation in Inuktitut, English and French.

The inquiry’s stop in Iqaluit is followed by hearings scheduled in Quebec City, Winnipeg and St. John’s this fall. The commission will finish its research by Dec. 31 and submit its final report by April 30, 2019.

Though commissioners requested a two-year extension to its two-year set mandate, the federal government responded in June by instead offering funding to extend its work by just six months.

With its end now in sight, Robinson worries that the inquiry will end up missing out on hearing important voices.

The inquiry can no longer take new registrants; commissioners are still gathering testimony from those survivors and families who registered to participate before the commission’s April 2018 deadline.

“It’s absolutely heart-breaking that the sharing had to stop,” Robinson said. “It’s a missed opportunity. And for me personally, that’s the hardest part of the government’s decision.

Roughly 100 Inuit families have already shared their stories with the commission, including the handful of Nunavummiut who spoke publicly in Rankin Inlet last winter.

There, commissioners heard powerful and painful testimony from multiple survivors of sexual abuse and domestic violence, and members of bereaved families.

For Iqaluit or Nunavut families who have registered to testify, Robinson said statement takers will be visiting Iqaluit in late September to meet with participants.

“Families have provided so much truth. They tell us exactly what is and what isn’t working,” Robinson said.

“I think the success of the inquiry will be in the implementation and the action, and that will be done at the grassroots level,” she said.

“We can’t depend on the government to act. We must call on them to, and if they’re honest in their intentions of the objective of this inquiry, they will.”