“We’re expecting to see an increase in contaminated drinking water” 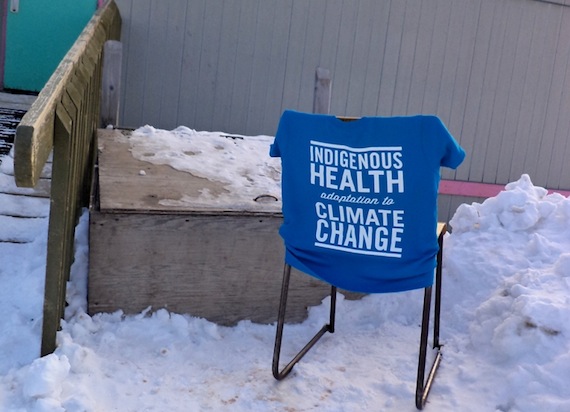 This t-shirt from the Indigenous Health Adaptation to Climate Change project is hung over chair in front of the Anglican Parish Hall in Iqaluit, where a char and bannock feast took place March 21. (PHOTO BY SAMANTHA DAWSON)

Climate change, which affects food security, may also lead to an increase in stomach illnesses among Inuit.

That’s according to the “Indigenous Health Adaptation to Climate Change” project.

This project sent researchers in to Iqaluit to conduct 20-minute interviews with Inuit in Iqaluit about what they eat, whether they hunt, and whether they have stomach problems, such as vomiting or diarrhea, which are among symptoms of acute gastrointestinal illness.

To reach more people, interviewers have gone door-to-door to about 500 homes in Iqaluit.

And they also held a char and bannock feast at the Anglican Parish Hall on March 21.

Bacteria, parasites and viruses carried by contaminated water or by person-to-person contact can cause stomach illness, said Sherilee Harper, a lead researcher on the project.

While Harper did not offer any specific details about what these are, high rates of stomach illness are found in aboriginal communities in general, and in particularly Inuit communities, she said.

The incentive to start the study in Nunavut was based on interest from “government stakeholders in Iqaluit,” past research from Nunatsiavut, and high rates of stomach illness in the Arctic, she said.

As for what kinds of stomach illness could affect people in Iqaluit, previous studies have shown seven in ten Nunavummiut are infected with Helicobacter pylori bacterium, a bacterium that lives in the lining of the stomach and is associated with low level inflammation.

More than one third of men and women tested positive for H. pylori, as did nearly half the children surveyed by the 2007 Nunavut Inuit health survey.

The infection, which usually produces no symptoms, can cause stomach pain and lead to ulcers.

“In rare cases, it can cause stomach cancer,” the adult report on the Nunavut Inuit health survey said, although the World Health Organization ranks H. Pylori is a “Class I human carcinogen.”

The link between stomach illness and climate change is connected to shrinking sea ice and the amount of rain or snow that falls.

That’s because some stomach illnesses are water-borne and people get them through contaminated water.

“After a period of heavy rainfall or rapid snow melt, sometimes things get washed into water sources…and with climate change they’re predicting that more of these weather events are going to happen,” Harper said.

“We’re expecting to see an increase in contaminated drinking water [worldwide],” she said.

The project aims to see the results of its research impact government programs.

“We’re in the process of working with Iqaluit Public Health, the Nunavut Research Institute and the Government of Nunavut health department,” Harper said. “We’ve tried to involve them as much as we can so I hope it’s useful.”

So far they’ve amassed “a lot of good quality data” on stomach illness and food security in Iqlaluit.

Another round of surveys is planned for May, and the results will then be shared with people in Iqaluit this coming June.

“The reason we’re doing it twice is so we can look at seasonality,” Harper said.